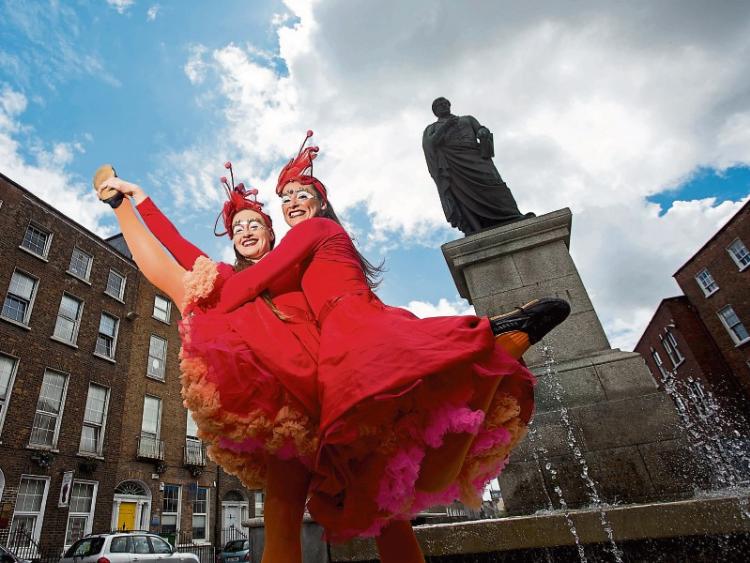 Catherine Ryan and Laura Malone of Fidget Feet at the announcement of the Culture & chips Takes To The Streets event PICTURE: Alan Place

THE people of Limerick will have one last chance to push the city’s European Capital of Culture 2020 bid when a massive party takes to the streets to celebrate the “magical journey” of the campaign.

On Tuesday week, July 12, the public is invited to join the bid team for hours of entertainment and family fun, in order to show off the city’s credentials  for the 2020 designation.

The ECOC jury panel will review the city and its cultural institutions, while thousands enjoy a wide range of festive events that will be soaked in culinary, artistic and musical culture. The carnival atmosphere will kick off at midday and conclude in the evening.

If Limerick is successful in this historic bid, it will be worth around €170m to the city, according to estimates. Limerick will not get the opportunity to enter the European Capital of Culture bid for at least another 15 years.

The public will be treated to a number of events, including the Culture and Chips food carnival, a taste of international cuisine with the World Recipe Exchange, and gatherings at the Hunt Museum, O’Connell Street’s urban garden and Howley’s Quay.

Bid director Mike Fitzpatrick said that now is “the right time” for Limerick to earn the prestigious title.

“Limerick is aware that the jury is in town, but it’s not about the jury; it is about having a moment to say, ‘Look how far we have come’ in terms of how culture has formed part of everyday life in Limerick. Whatever happens on the 15th, whatever the decision is, that will remain. Culture will remain at the centre of what we do. It has given us so much confidence and belief in ourselves.”

He said, since Limerick became the first City of Culture in 2014, there has been a “great sense of energy” in every community.

“We just want to acknowledge that on the day. It’s about creating a sense of saying: ‘Yes, we are up for this’. In terms of the changes that have been wrought over the last couple of years, this is a very timely moment,” he enthused.

He added that he would like the public to continue showing their support online and through social media.

“It’s time for us to shout out loud and say that we really want this bid, because we all know the value and the benefit that it will bring to the city and the region.”

On July 14, the bid team will make its final presentation to the panel at the National Concert Hall in Dublin. The winner will be announced on July 15.

Limerick is competing against Galway and the Three Sisters [Waterford, Wexford and Kilkenny] for the sought-after title.

Bid deputy director, Sheila Deegan, said the festive day “may go down as one of the most important days for the city.

“Naturally, on that day we want to illustrate to the jury the depth of culture, and pride in that culture, that we have in Limerick but we also wanted to use it to throw a big street party for the people of Limerick, for everyone who played a part in the magical journey we have had so far.

“Win or lose with the 2020 bid, we have achieved an awful lot and it is time to celebrate so we are asking that as many people as possible to turn out and enjoy this party with us.”

She added they have been campaigning for the title since they put their hat in the ring for the European Capital of Culture 2005 bid in 2000, which went Cork’s way.

“The journey has awakened a real sense of cultural identity in Limerick and a wider awareness of just how rich, diverse and talented our cultural heritage is. We were Ireland’s first City of Culture and we certainly showed over the course of that magical year just how much Limerick has found its cultural voice and it is now singing from the rooftops.”

Newly elected Mayor of Limerick City and County, Cllr Kieran O’Hanlon welcomed the historic street party.  “Having people out on the streets on Tuesday will, for sure, be no harm as the jury visits Limerick but this is really about Limerick taking time to clap itself on the back, reflect on just how far we have come generally as a city and the influence that culture has had on that journey.”