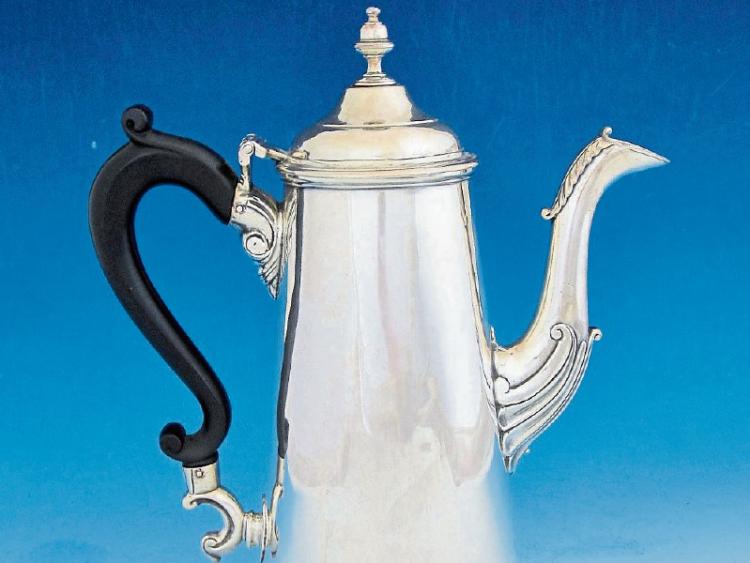 A pair of rare Limerick silver coffee pots are expected to fetch almost €1m when they go on sale later this summer.

The two pots are to be listed in the upcoming catalogue by antique dealer L&W Duvallier with a price of STG£750,000.

They were made by noted Limerick silversmith Joseph Johns around 1750.

According to antique dealer William Crofton of L&M Duvallier, this may be the first time since they were made that the two coffee pots have been reunited.

”There are only three known Limerick Coffee pots and the remaining example by Samuel Johns was once owned by my father and is now housed in the Limerick Civic Museum,” Mr Crofton explained.

However, even though they are now on the market, he is not confident that the two remaining pots will return to the city in which they were made.

”In my humble estimation there are only two potential buyers for these coffee pots in the island of Ireland. Hence, the likelihood that these pots will end up abroad is as close as you can get to a certainty,” said Mr Crofton.

”If I were a bookie, I would give odds of about 500-1 that these pots would remain in the country. However, like everybody else, we all root for the long shot and, who knows, with a bit of luck and good coverage in the media we might find a winner.”

He said that, while he would like to put the items in display in Limerick, he had no intention of doing so at present as there was no suitable exhibition space.

Joseph Johns was one of the most prolific and arguably the most successful of Limerick goldsmiths. He became a freeman of the city in 1731 and went on to hold many important municipal offices, including sheriff, burgess, chamberlain and mayor (1733).

One of the coffee pots bears the initials UIM, believed to be for Isaac and Mary Unthank, members of a prominent Limerick Quaker family who were involved in many commercial and social activities including the Limerick Saving Bank and the Pery & Jubilee Loan Fund.

Two other pieces made by Joseph Johns and bearing the initials UIM - a 7oz cream jug and a 6oz sugar bowl – were part of the exhibition of Limerick silver held in the Hunt Museum from September 2007 to January 2008.

The other coffee pot, made by Joseph Johns around the same time, bears the Petyt arms.