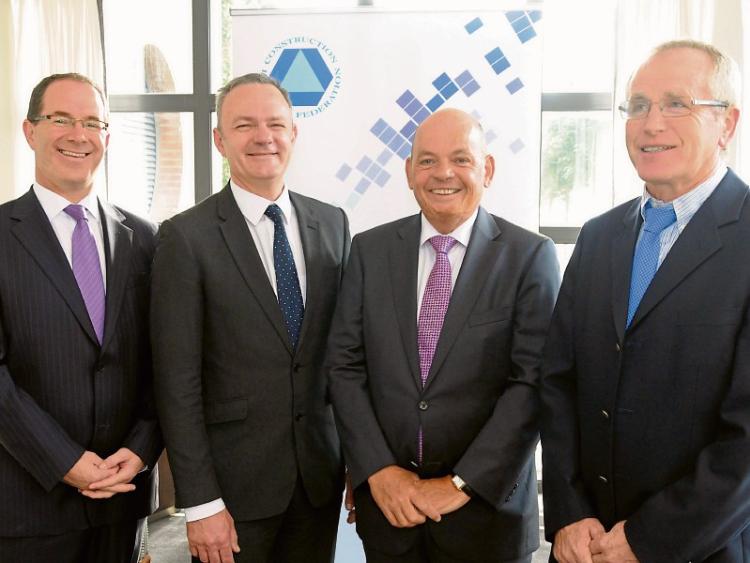 THE severe shortage of housing in Limerick is a threat to the region’s economic growth over the coming years, senior figures in the local property industry have warned.

The scale of the problem is illustrated in the latest data which show that only 176 houses were commenced in Limerick city and county last year, with 120 due to be built this year.

The figures were presented at a property briefing hosted by the Construction Industry Federation in Castletroy this Wednesday.

Gordon Kearney of Rooney Auctioneers pointed out that the average asking price for a new home in the city had increased 18% in the past 12 months. This, he said, was the joint highest increase alongside Waterford) in the country and was due in part to the increase in employment with the arrival of companies such as Northern Trust and Uber.

However, he warned that other potential employers may be discouraged from locating in the area due to the lack of good quality accommodation for their staff.

“There is good employment in the region but we need to make sure we have a housing supply to meet that demand coming in. Otherwise companies looking at Limerick as a destination may look elsewhere if they feel their staff or their executives can’t get adequate housing supply,” he told the meeting.

Mr Kearney also suggested that, despite the recent increase in prices, the value of new houses was still below the level where developers could expect to generate a profit margin. This was something that could be addressed by government introducing a lower VAT rate on building costs, he said.

“At the moment they are not, in my view, getting any encouragement from the government to support building.”

Other issues that needed to be addressed, according to Mr Kearney, included the lack of supply of retirement-type homes suitable for older couples looking to downsize, and the requirement for builders to provide social housing as part of any new development.

“Social housing is a problem that won’t going away,” he said, pointing out that many potential buyers are put off buying a house in an estate if there is social housing nearby.

The lack of supply was also highlighted by Kersten Mehl, who runs one of the largest property management agencies in the city. He pointed out that they had only six vacant properties on their books this week, representing less than 1% of the total properties under management.

“We stopped compiling a vacant list in November 2015 as we no longer had vacant properties,” Mr Mehl told the meeting.

Mike Ryan, chairman of the Mid-West branch of the CIF and managing director of MA Ryan & Sons Ltd said he was one of only seven developers currently active in the greater Limerick area. He called for a range of measures to be put in place to encourage building activity.

“The housebuilding sector is experiencing many challenges resuming activity including the high cost of regulation, the availability of finance to mortgage applicants and to developers, the availability of zoned and serviced land as well as a lengthy and cumbersome planning process,” said Mr Ryan.

Meanwhile, Fianna Fail TD Niall Collins this week called on the Government to increase spending on social housing in order to achieve the target of 50,000 new social housing units recommended by a Dail committee on housing and homelessness.

“Funding is not the only problem the Government needs to overcome. Outstanding problems with the planning process must be tackled to help kick start housing construction,” the County Limerick TD added.