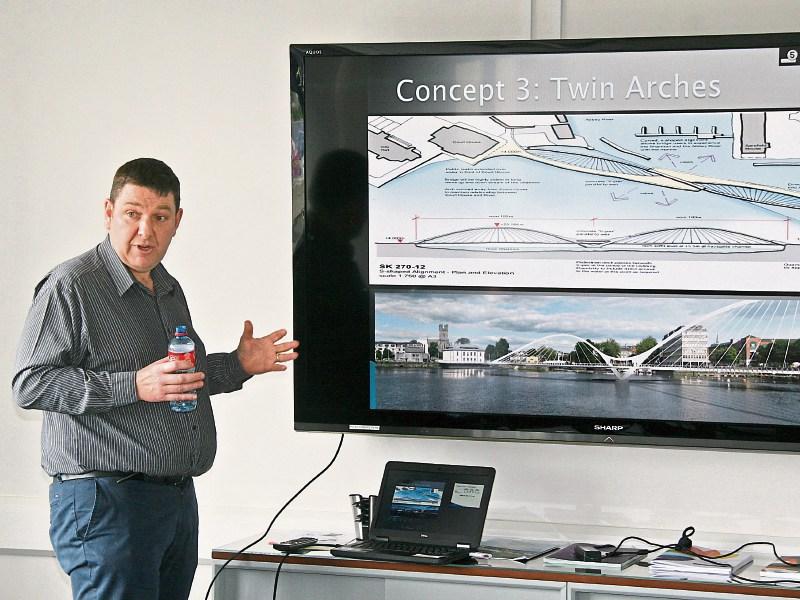 LIMERICK City and County Council unveiled its preliminary plans for the controversial footbridge project on Thursday, part of numerous presentations to take place in front of elected representatives and the media.

The council’s economic director, Pat Daly, led the briefings alongside senior planners Kieran Reeves and Liam Conneally, who described the footbridge as a “priority project”.

After briefing the councillors on the project, Mr Daly said that the authority was “hopeful” that it would be able to seek approval for the project at the July council meeting.

The authority brought forward three different concept designs for the bridge, and the costs of delivering the project will depend on which design is selected.

Depending on the chosen design, it is envisioned that the bridge will cost between €8.1m and €17.1m.

Mr Reeves told the press, at Thursday’s 4pm briefing, that the price range was an “indicative cost estimate”.

The concepts include a regular platform bridge that stretches out from Sarsfield House to the side of the courthouse, adjacent to the Curragower Boat Club; a bridge with a centre point that “engages with the river”; and the familiar twin-arch bridge that starts at Arthur’s Quay Park and finishes at Merchant’s Quay.

The executives said that if councillors approve the project, funding for it will be able to drawn down -  €6m in total - from the Department of Transport, Tourism and Sport, complemented by matched funding by an anonymous philanthropic source.

After council approval, the project will need the final go ahead from An Bord Pleanála.

In response to criticisms that relate to environmental damage and a possible impact on the King John’s Castle view, Mr Reeves said that the council “still has to carry out a full environmental assessment, but it is not seen as a major impediment to the project”.

He added that the bridge will also make the castle view “more iconic” to the public.

He explained that the project initially started in response to research undertaken by Fáilte Ireland for the Limerick 2030 economic development plan.

It stated that the Shannon and its riverway were “integral parts” of Limerick city, and that they offer a “new way of experiencing the city”.

For more on the footbridge plans, pick up the Limerick Leader Monday tabloid and broadsheet editions next week.