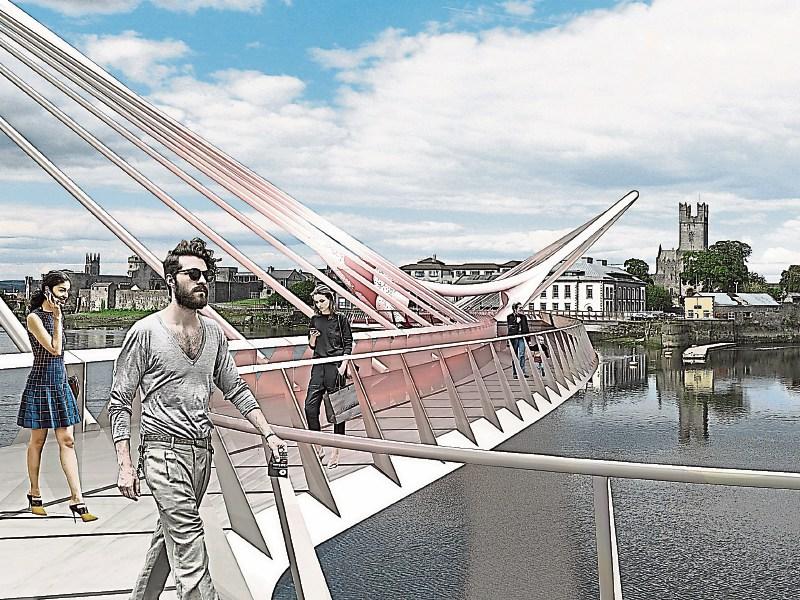 An artist’s impression of what proposed footbridge, which will run behind the site where the old Potato Market was located, might look like

SENIOR management at Limerick City and County Council have been criticised after it emerged the local authority is advertising for a design team for the controversial footbridge project.

Councillors are being briefed behind closed doors on various options for the bridge this Thursday, which could have an estimated cost of up to €18m. A €1.2m tender assessment has been advertised on the Construction Information Services website.

It shows the local authority is seeking to appoint a design team “to complete the Limerick Footbridge project”.

While a council spokesperson insisted no appointments have yet been made in relation to the project – which could see the link pass from Arthur’s Quay and behind the Potato Market – there is upset because of the fact that council members will ultimately decide on the footbridge.

Former metropolitan district mayor Michael Sheahan said: “Of course it is presumptuous. It would also show a little bit of contempt for the role of public representatives.”

Meanwhile, Labour councillor Joe Leddin said: “I would be disappointed if I thought they were proceeding in terms of different stages of the roll-out without first getting the input of the council.”

Economic director Pat Daly is briefing councillors this Thursday on plans, with media briefing also to take place at 4pm.

Cllr Cian Prendiville, Anti-Austerity Alliance, said he was “very disappointed” at the seeking of a design team, adding: “So far, the councillors and the public have been kept in the dark. There have been plenty of discussions about much needed investment in the city, and many reports written about developing the city centre in particular, but none of them mentioned this bridge.”

And Sinn Fein councillor Séighin Ó Ceallaigh compared the advertisement of the plan to the similar tenders sought for the Northern Distributor Road project.

“If this bridge is voted against, will they keep throwing this at the councillors until they finally give the decision the executive wants”.

For their part, a spokesperson for Limerick City and County Council stated: “The council has commenced the process of pre-qualification for a footbridge design team, and this is normal preparatory procurement procedure should the council wish to proceed with the project.”

Asked what will happen if councillors vetoed the project, the spokesperson added: “Without the support of council, the project will not happen and this would be a lost opportunity for the city.”

The proposed building of the footbridge – partly with the support of an anonymous donor – has split the council, with many stating it would damage the Medieval view of the castle and its surrounds, as well as impede the flow of the Shannon.

There is also disquiet at the fact the bridge is not listed in any development plan, including Limerick 2030.

However, other people have welcomed the footbridge plan, saying it will be an added bonus to tourism in the city, and pointing out that the funding cannot be spent on other schemes.

A group set up in opposition to the multi-million euro plans, Footbridge Folly said the advertising of a tender is “highly presumptuous”, and suggested the executive of the local authority could be seen be acting “irresponsibly” in doing so if the project is vetoed.

“The councillors can veto the proposal prior to the planning stage, and secondly, An Bord Pleanala can reject the proposal at planning stage. if this is the case, then the senior executive of the council will be seen to have acted irresponsibly,” the spokesperson said.

Failte Ireland has ringfenced funding for the project, the Department of Transport, Tourism and Sport will be providing grant assistance, if the scheme gets the go-ahead. A private donor has promised substantial funding.

A department spokesperson said: “An allocation of €150,000 has been made this year, with a view to facilitating the council in progressing project development. In this context, the council has been asked to provide the supporting documentation required for consideration of this project.”