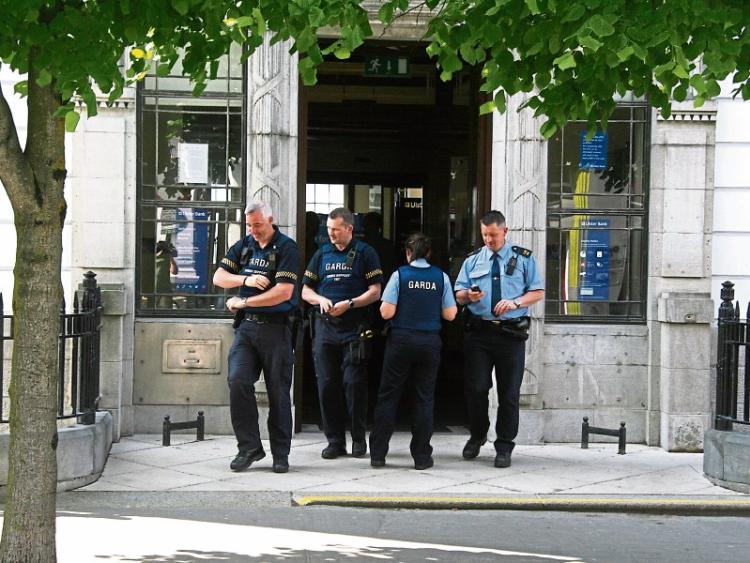 Gardai at the scene of a bomb alert at Ulster Bank, O'Connell Street earlier this month PICTURE: Adrian Butler

GARDAÍ in Limerick are continuing their investigations into a number bomb threats that have taken place in the city over the past month.

Last Friday, staff at Live 95fm had to evacuate the building after an anonymous caller phoned the radio station during the Afternoons with Declan Copues programme at 1.55pm, and informed them that a bomb was “going to go off” at its offices “in 10 minutes”.

HSE pensions staff, who also work in the building, also had to evacuate the premises.

Earlier this month, there was a bomb scare at St Joseph’s Hospital, on Mulgrave Street, which transpired to be a hoax. On May 25, Ulster Bank on O’Connell Street received a call from a woman who claimed that there was a bomb in the premises.

That incident happened just 24 hours after a similar hoax call to Milford National School, when 500 pupils and teachers were evacuated following a threat at the school.

According to a garda source, they are investigating the phone traffic of these incidents “which takes time”.

Senator Maria Byrne told the Limerick Chronicle that it is “very frightening. You can never take these things lightly. It has to be taken seriously. People’s lives could be at risk if they turn out to be true.

“Obviously, someone has a lot of time on their hands. But you would really have to wonder what this is all about. Is someone playing a joke?”

“Hoping for a hoax. There needs to be an investigation and prosecution. Disgraceful spate of threats locally by hoax callers,” he posted on Twitter.

“Often these people feel power and they feed off the fear of their victims. But we really need to fight back at these people.”

Fianna Fáil councillor and former Limerick city detective, Sean Lynch said that these incidents “are very annoying. They waste everyone’s time, including the gardaí and the emergency services”.

A garda source said that they are currently treating each incident separately.

“I am sure that, with the technology that we have, the gardaí have the best position to target these people. I am sure that they will soon reach a successful conclusion.”

He said that he appeals to anyone who may have information, to contact Henry Street garda station, at 061-212400.