Plan for €18m Limerick footbridge to be discussed by council 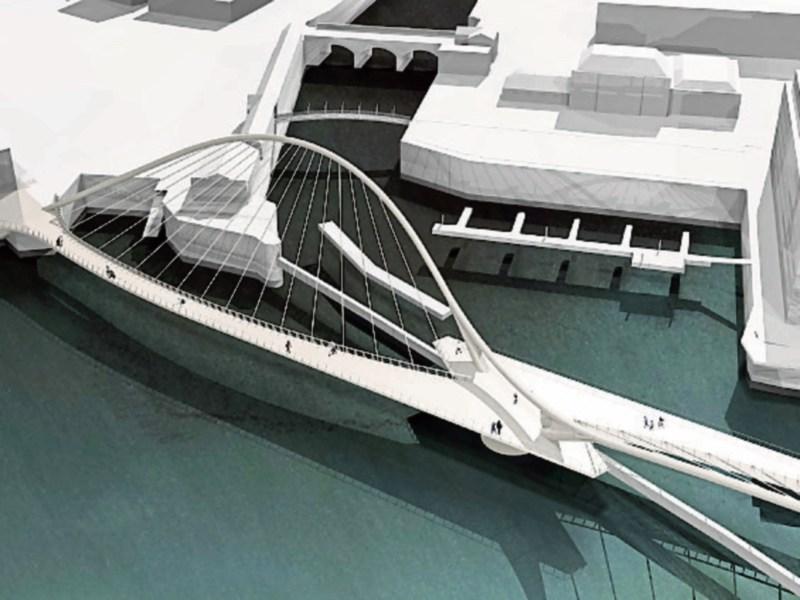 An artists’ impression of the controversial €18m proposed footbridge, which has divided councillors and the public

LONG-awaited proposals for a new €18m footbridge across the Shannon will be presented to councillors this Thursday.

Limerick's local authority is proposing to build the link, which may run from Arthur’s Quay, and behind the Potato Market.

A group set up in opposition to the scheme, Footbridge Folly, has said the bridge will impede the flow of the river and destroy some of the views of the Shannon.

There is also disquiet about the fact the bridge was not listed in any development plan, with question marks remaining over the status of an anonymous donor who is to provide some of the finance.

Three former mayors – Cllrs Michael Sheahan, John Gilligan and Kathleen Leddin – have all spoken in opposition to the plan.

But this Monday, another two former mayors – who are expected to again hold the portfolio shortly – have spoken out in support.

Fine Gael councillor Michael Hourigan said he would see the link as “a big positive”.

“I think we should be very serious about this footbridge. It will be a feature in this city. The money is coming down from Failte Ireland, and we are being given money from a benefactor. We are all trying to develop tourism in this city, and we have been told in the near future, tourism will be the largest industry in this country. So if we are to get our share of tourism back into this country, and back into Limerick, and enjoy the riverscape, I’d see the bridge as a big positive,” he said.

Cllr Kieran O’Hanlon favourite to become the next Mayor of Limerick City and County – said he would be “leaning towards” the idea of a footbridge.

But he warned the council needs to engage in a better level of consultation.

“The whole announcement about this bridge was not up to the standard it should have been. My understanding is there is are a number of options available. There €16m is available to spend on this, so we need to get it right,” he said.

Cllr James Collins is keeping “an open mind” on the scheme, saying: “We had a brief presentation, where a couple of powerpoint slides were thrown up, but that is the only discussion I have had in relation to it.”