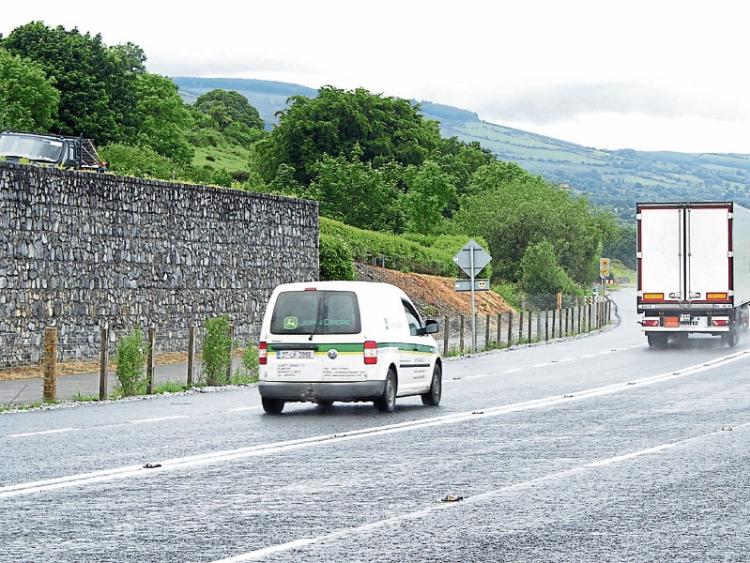 THE chairman of the Barnagh Action Group, Seamus Collins, has warned that walkers and cyclists are now at risk where a section of the Great Southern Trail runs alongside the N21 at Barnagh. And he is adamant that crash barriers are needed there.

“This is an accident waiting to happen,” he warned this week, pointing out that all that stood between walkers and cyclists and the heavy traffic on the N21 were fence poles and chicken wire or a low earth ditch for almost a mile.

“I use the trail a lot, to walk and cycle,” Mr Collins said, explaining that he is very aware of the conditions along the stretch of road at the top of Barnagh. Moreover, he added, the trail is more and more being used by  groups of walkers or cyclists. If a car or lorry came off the road, they would have no chance, he said.

“What are needed are crash barriers,” he continued. . But he expressed surprise that these barriers were not put in place earlier this year when Transport Infrastructure Ireland (formerly the NRA) was carrying out improvement works at Barnagh. “They did a fine job,” he acknowledged, praising the work done at the car-park and on the resurfacing.  “But they put up crash barriers at the other side of the road and nothing along the trail side.”

Now, he is hopeful that action will be taken. Earlier this month, Cllr Seamus Browne raised the issue at a meeting of the Newcastle West Municipal District’

“Extending the crash barriers on the N21 Barnagh Road is an absolute necessity in keeping safe people who use the Great Southern Trail,” the councillor said. The existing chicken wire fence was not sufficient protection on a road that sees very heavy traffic to and from Kerry, he argued.  But he was pleased that his proposal to apply for funds to erect barriers was accepted.

“I very much welcome that decision,” he said. “The trail is extremely busy and an important tourism asset for this region, so this is very positive news for the area. It is a beautiful route and it is very popular with locals at all times of the year.”

The extension of the much needed barriers would represent an investment in the maintenance of the trail, the Sinn Fein councillor continued. “It would help ensure that a first class experience continues to be offered to visitors and locals alike,” he said.

“I am delighted that colleagues recognised the sense in my proposal and agreed to move on it. I am very anxious that the extension is carried out a soon as possible.”

Meanwhile, Seamus Collins said the Barnagh Action Group was anxious to hear from relatives of those who had been killed on the road. They would like, he said, to erect some plaque or monument in their memory but would like to hear the views of relatives as to whether they would support such a project or not.

He asked people to contact him on Facebook. The Barnagh Action Group was formed following the deaths in 2010 of five people, four in one accident alone, at Barnagh. They campaigned for the re-alignment of the road, which was carried out in two phases, the last of which officially opened this year.