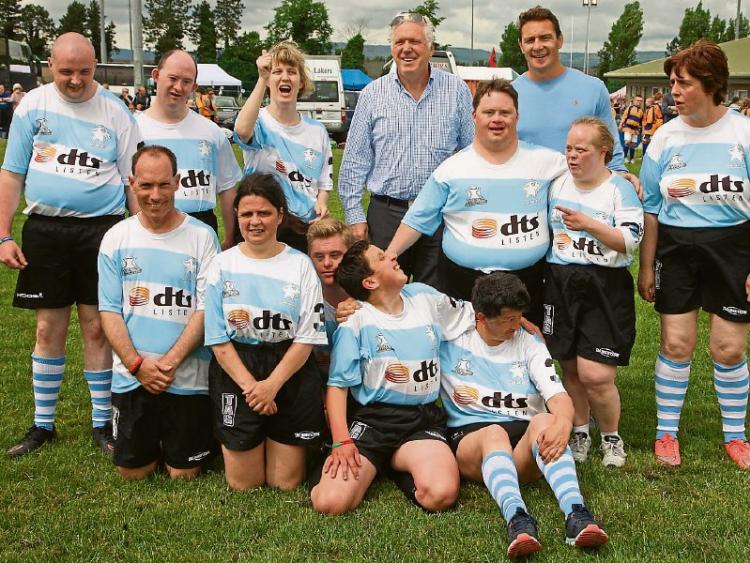 ON THE SAME day that a male Irish rugby team beat New Zealand for the first time in the U20 World Cup and Ireland recorded a first test victory against the Springboks in South Africa – history was also made in Limerick.

Garryowen FC hosted the first Wooden Spoon International Special Needs Tag Rugby Tournament in the Republic of Ireland. The rugby club and the Daughters of Charity pulled out all the stops to facilitate 400 excited and committed tag rugby players from all over Ireland, England, Scotland and Wales.

The festival kicked off on Friday evening with a social evening for the visiting teams and supporters. Club stalwarts - including Geraldine Morrissey, Seamus Maher and Tony Kiely – were on board to extend the club’s hospitality.

The tournament kicked off on Saturday morning thanks to a lot of collaboration and team work from a number of different agencies – IRFU event management team; Munster Rugby; Daughters and Garryowen.

Rugby legends Fergus Slattery and David Wallace were two of many spectators. They posed for countless photos and signed numerous autographs for players.

The tournament was all about the players and coaches of Garryowen Lions -  Ashley Ryan and Michael Hennessey – said: “The players really enjoyed the rugby and clearly they had raised their game for the matches.”

Tournament director, John O’Callaghan said there was a very special and positive atmosphere in Garryowen FC during the tournament.

“It finished with the presentation of trophies and medals. I would like to thank those who made the event possible, in particular Wooden Spoon whose generous sponsorship and support was incredible. Other funding was received from Limerick City Council Diaspora fund and Black Bee Investments.

“The many volunteers who helped from Black Bee Investments, Bank of Ireland, Dell, Garryowen FC, Daughters of Charity and Ardscoil Ris Secondary School to name but a few,” said John.

Garryowen FC chairman, Dermot Morrissey and Fergus Slattery presented the trophies and medals to each club. Dermot stated he was “delighted and humbled” to be part of the day and Garryowen FC were committed to supporting community projects and events into the future.

Euan Gee, Munster Rugby community development officer, said: ‘There is huge scope for adults and kids with special needs to get involved in tag rugby in the province.”