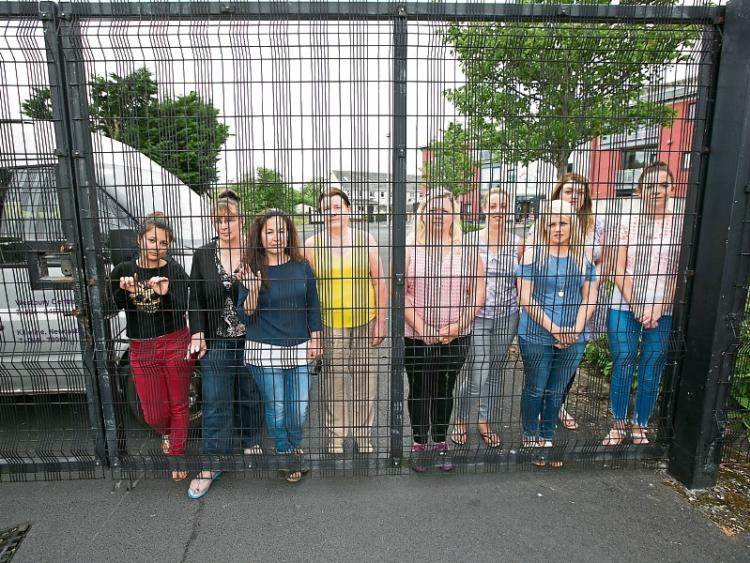 Workers at the Tic Toc creche in Westbury who were staging a sit-in at the premises Picture: Press 22

WORKERS who have been involved in an 11-day sit in at Tic Toc creche in Limerick left the premises together this Tuesday after securing their redundancy dues.

The workers were sacked without warning when the operator of the nursery and montesorri school at the Westbury centre said the business was “unviable”.

In a bid to secure all holiday pay, back pay and redundancy pay was placed in their accounts, they staged a sit in in the former dining room of the complex from Friday, June 3.

The sit-in came to a close today after all workers confirmed money had hit their accounts.

Staff spokesperson Rose O’Donnell, Westbury, said: “This has been a horrendous period. I hope none of us, or no-one in our families ever have to experience anything like this again.”

She said although staff have secured their redundancy dues, there is no sense of triumph.

“We feel we have only received what we were entitled to in the first place. We will obviously celebrate Rachel's wedding, but we won't be celebrating what we received from Tic Toc, because we should have gotten this from day one we feel,” she told Live95 FM.

Siptu’s Limerick chairman Frank McDonald, who has supported the workers throughout the ‘sit-in’, has handed over the women’s details to the liquidator expected to be appointed to Tic Toc.

He says he is aware of interest from three operators.

“Wouldn’t it make sense you have a ready made team, which has a great connection with parents and the kids, with a lot of then qualified to Fetac level six,” Mr McDonald said.

After the workers walked out of the premises together, many journeyed up to Spanish Point to watch friend and former colleague Rachel Quinlivan tie the knot.

Rachel, 40, who is wedding Shanagolden man Lawrence O’Shaughnessy, decided to go ahead with the ceremony otherwise she would have incurred huge losses on her deposits.

But her honeymoon plans for a cruise around the Mediterranean have been abandoned, while a spa day was also shelved.