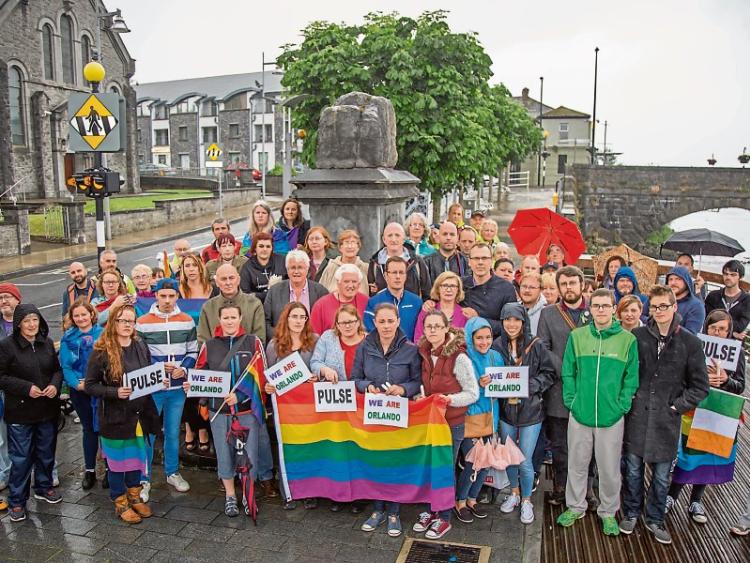 The first of two vigils to be held in Limerick took place on Monday night Picture: Johnny Baynes/ILoveLimerick

THE first of two candlelit vigils in solidarity with those killed in the Orlando shootings took place in Limerick city last night.

People gathered at the Treaty Stone on Clancy Strand on Monday evening holding rainbow flags and signs stating: 'We are Orlando', plus 'Pulse', the name of the nightclub where the atrocity happened over the weekend.

A total of 49 people lost their lives in the attack at the gay nightclub on Saturday, when a gunman who is understood to have had Isis sympathies opened fire, before he was killed in a battle with police.

The incident, which has shocked the world, left scores more injured.

Monday's vigil was organised by Eileen O Brien, Breandán Ó hÉamhaigh and Billie. A second gathering will take place on Wednesdaynight at 6.30pm in Arthur's Quay park, while an online book of condolences has been opened this morning by Limerick City and County Council.

Tributes can be left here.

Mayor of Limerick, Cllr Liam Galvin has described the attacks as a “disaster” and a “tragedy”.

The mayor added that if people are unable to access the internet to sign the book, they can visit the council’s customer service desks at Merchant’s Quay or Dooradoyle to leave messages in the book.

Limerick Chronicle columnist Richard Lynch, who is organising Wednesday evening’s vigil, said the gathering was for all members of society.

“It is a chance for us to reflect on what has happened. It is not just for the LGBTQ community,” he explained.

“All of us have been affected by this. Anyone who is concerned about humanity at all, the loss of a loved one, be it a child, a sister or a brother should attend," he added.

Louise McCormack, the events co-ordinator of Limerick Pride 2016 said: “The loss is felt worldwide amongst all type of communities who feel the unwarranted hatred of strangers.”

Imam Abdulghafur, Dooradoyle Muslim Community Centre, said: “Any loss of life is a tragedy, especially innocent lives. The thing that we are scared of is the backlash. People are going to think all Muslims are the same, even though that individual is working on his own. This did not happen in the name of Islam”.

Mayor Galvin said the attack must throw the ownership of guns in America back into focus.

”This isn’t a once off, this is happening far too often, and there are far too many people getting their hands on weapons and armoury too easily,” he said.

Meanwhile, Bishop of Limerick Brendan Leahy has urged the public to keep the people of Orlando in their prayers and has offered his and the support of the diocese to his peer, Bishop of Orlando and Limerick native John Gerard Noonan, at this tragic time.

"The attack in Orlando was beyond words. With 49 innocent people killed so mercilessly, it reminds us yet again of the dreadful intent of terrorists," he explained.

"Bishop Noonan, who is from Corbally, captured the sense of shock and hurt that Orlando has experienced when he said ‘a sword has pierced the heart of our city.

"He has asked for prayers for the victims, the families and first responders as well as for victims of violence and acts of terror; for their families and friends and all those affected by such acts against God's love and I know that we will all keep them in our prayers and thoughts this week.

"We pray for the people of the city of Orlando that God's mercy and love will be upon us as we seek healing and consolation," he added.