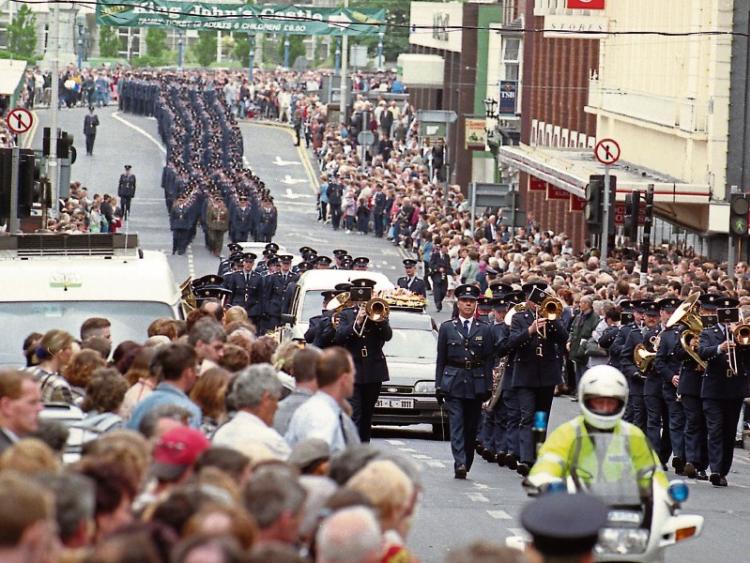 The funeral of detective Jerry McCabe, seen here passing up Sarsfield Street, was one of the biggest Limerick has ever seen

A HEAVY cloak of silence hung over Adare at 6.53am this Tuesday.

In contrast to the bright, clear blue skies overhead, a sea of pensive faces stood resolutely side by side; some clutching hands, holding tissues, others staring pointedly at the ground, with their own private memories.

Together, each and all remembered a much darker day which happened upon this village, casting a long shadow; two decades long.

But they never expected this. It was a premonition which sadly transpired on what should have been just another ordinary, run-of-the-mill call for duty one June morning.

He left the house before 6am, his wife Ann was at home in Greystones, as their children Stacey, their only daughter and the ‘apple of Jerry’s eye’, sat her Leaving Certificate and son Ross sat his Junior Certificate.

They had yet to leave the house for school when Ann received a knock at the door. The colour of the inspector’s face, who relayed the news, has stayed with her to this day.

“On the morning of June 7, 1996, detective garda Jerry McCabe and Ben O’Sullivan, long time friends, reported for duty at Henry Street garda station. The day was really no different from any other days they commenced for duties,” said Chief Superintendent Dave Sheahan.

“A duty they had performed previously on so many other days. Others had planned, however, that this would be a day unlike any other. Their actions would be painful and forever etched in the minds and consciousness of us all.

“These others, who claimed to embody true Irishness, who claimed to heroically represent us, the citizens of this land, armed themselves that morning with the intent to commit violent, criminal acts against the Irish State.”

“Despite the passage of time, it remains difficult to speak of the events of June 7, 1996, the day on which the McCabe family and the Garda family suffered such a tragic, cruel and needles loss.”

Of the four men who were convicted of his manslaughter – Pearse McAuley, Michael O’Neill, Jeremiah Sheehy and Kevin Walsh - the latter three are believed to be living in the Patrickswell area, where they are from. The initial charge of murder was dropped after key witnesses refused to co-operate following IRA intimidation.

Two other men suspected of involvement in the killing are on the run in South America.

Many people acutely remember where they were that day.

Comedian and entertainer Brendan Grace, who appeared in a recent special memorial concert for his friend in the University Concert Hall, said when he got the news “the dreadful morning, it was like being hit with a freight train for me.”

They were good friends – him and Jerry, and Ben O’Sullivan, now 72, who was with Jerry, his partner in the force, his best friend, the day he died.

“They were good people to have a drink with, good fun,” said Brendan.

Ben and Jerry were “joined at the hip”, the former said, as tears sprung to his eyes under the glare of Adare sunlight and TV cameras this Tuesday morning.

He relived it again, just as he has relived it every day since, some 7,300 days ago.

Those tears were also present when he spoke of Jerry less than a month ago, as he stood next to a bust of his friend in Henry Street, as a memorial concert was announced.

But it was this Tuesday’s tribute which “brought me to my knees”, he said, standing across the road 20 years to the day, the hour, the minute, where it all unfolded in the blink of an eye and lives were changed forever.

His life was somehow, miraculously saved; his friend’s wasn’t.

“I felt his pulse, and his pulse wasn’t there,” he lamented.

“My greatest fear was that I’d bleed to death. Thankfully that didn’t happen but I’m not invincible at all. If I was struck where Jerry was struck I’d be where he is.”

Both detectives, who started in the branch together 23 years previously, were escorting a cash in transit van at 6.50am when their car was struck by a 4x4.

Of the 15 rounds fired, one hit their car, three hit and killed Det Gda McCabe, and 11 struck Det Gda O'Sullivan.

“I have come to terms with living with what happened, but I'll never forget it, and all these people here today won't forget it either. Time is a great healer and time thankfully has come to my rescue with regards recovering fully.

“Jerry is gone in reality, but in memory he'll never be gone. Jerry and myself joined the detective branch in 1973, on the same day. For the length of time that we served, there was scarcely a day that we were separated because we worked as a team.

“Wherever you saw Jerry, you saw me, and regrettably today you see me - without Jerry. A smile is useless unless you give it away, and every time I saw Jerry a smile was evident.

The events of that day are still "crystal clear" in his memory.

"You're not supposed to forget that. You're meant to take up the gauntlet and accept that it happened.

At precisely 6.53am, the six-piece Garda Band played The Last Post, a lament long associated with death and remembrance, traditionally sounded at military funerals.

In Adare, it took on another, more haunting meaning as the village remembered a man of the force killed indiscriminately by members of the IRA during the course of his duties during a botched robbery.

Ann McCabe lined up outside Adare garda station – opposite the post office where her husband was fatally shot – flanked by Ben O'Sullivan to her right, and Willie Jackson, who drove the van to Adare that morning.

It was a solemn, moving occasion where words were few but the emotion of the occasion nonetheless weighed heavily on the family, the gardai and the wider Adare community, who gathered to pay their respects once again.

Supt Sheahan said the words of US President John F Kennedy were particularly true and fitting on this occasion.

A programme dedicated to the special memorial concert for Jerry McCabe will be broadcast on the Limerick County Matters Show on Irish TV, channel 191 on SKY, this Saturday, June 11 at 5.30pm