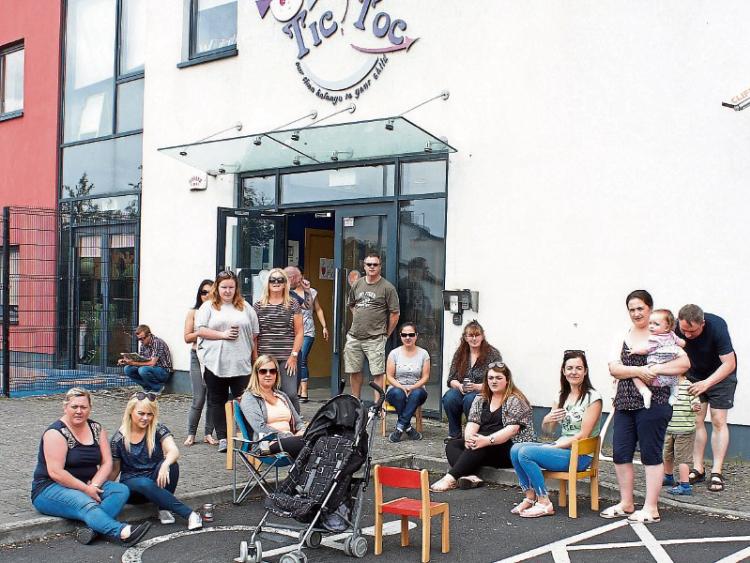 CRECHE staff at Westbury are continuing their ‘sit in’ protest, as they wait for their redundancy payments to bemade to lodged in their accounts.

Seventeen staff at Tic Toc nursery in Westbury on the outskirts of Limerick city were left shocked on Friday after being told the facility – which opened a decade ago – would cease trading. A liquidator is expected to be appointed to the company shortly.

Parents in Westbury and the surrounding area have also been plunged into chaos by the closure, with many being forced to take unscheduled time off, and reshcedule important meetings.

Most parents have laid the blame for the closure firmly at the door of company representative Peter Keogh, of Keogh Somers Chartered Accountants.

In a letter sent to some staff – although not all, many workers say – the secretary of Tic Toc nursery wrote: “We have completed a review of the future income and unfortunately even though numbers of children are going up with the introduction of the extended pre-school year, the income is projected to go down”.

They said that an international fund was administering the debt owed on the property, and the company was told it “does not have a mandate to support the business into the future”, and “they informed us they were not able to fund the business in the very difficult summer period”.

In a bid to guarantee redundancy payments, workers commenced a sit-in on Friday morning, and have remained in the purpose-built creche for the best part of a week, bedding down in the facility’s former dining room.

But they are still awaiting a visit from a representative of Deloitte, which is expected to be appointed liquidator to TicToc.

The firm is preparing paperwork to finalise the paperwork, and release redundancy funds.

Until this happens, Ms O’Donnell said workers’ lives are “at a standstill”.

“We do not have our P45 forms or our RP50s, so it is hard to move on and try and find other jobs, or courses,” she confirmed.

The Tic Toc letter said of the Westbury facility: “The local market does not have a need for full time creche places which makes the creche unviable”.

This claim was described as “ridiculous” by Ms O’Donnell, who has nine years service with the business.

”Not only do we service Westbury, which is one of the biggest estates in Munster, we also serve Shannon Banks, Parteen, Clonlara, and Broadford, and many other places,” she said.

While 17 staff have maintained a constant vigil at the Westbury centre, many parents and their children have joined them in solidarity.

One of these, Sarah Kieran, from Westbury, said: “Obviously, it is a very emotional upheaval because of the fact I have three children there who are nine, eight and three, and they have all been with Tic Toc since I went back to work after maternity leave. I viewed the women in Tic Toc as helping me rear my children, and to have that just pulled out from me overnight is a big shock.”

She has since managed to find an alternative creche for her youngest child.

Meanwhile, the former Tic Toc nursery at the Riverpoint complex in the city centre re-opened on Tuesday morning under a new name.

Although Tic Toc signs were clearly visible at the entrance to the complex on the banks of the Shannon, it is understood a new name will be sought, and made public in the coming days.

A source has indicated it could be known as ‘Rainbow Child Academy’. A handful of children and two staff were on duty at the site this Wednesday afternoon.

Representative of Tic Toc, Peter Keogh, confirmed to the Limerick Leader on Monday that the creche at Riverpoint was open under new auspices.

It is unclear how many staff will be employed at the complex, although it is understood many workers were of a temporary nature, and had reached the end of 38-week contracts which reflect the school year.

Around eight or nine staff had worked for TicToc in the Riverpoint previously.

What is also unclear is how many children the centre is caring for now.

The Newcastle West branch of Tic Toc, at Killeline, has been taken over by a new operator, who had originally stepped in on a temporary basis, agreeing to cover to the facility on its licence for 30 days.

Minister of State Patrick O’Donovan led talks between the owners and lenders, and confirmed the new operator would run the creche for a fixed period of 30 days, “to see if a longer-term solution can be put in place”.

“I want to thank the staff for their help today and also to thank the parent’s reps who I kept in touch with throughout the day,” he added. Around 70 families are understood to be reliant on Tic Toc creche.

TLC co-owner, Shaun Hester, confirmed the Newcastle West creche will now continue in operation as a TLC creche and all the former Tic Toc staff have been retained.