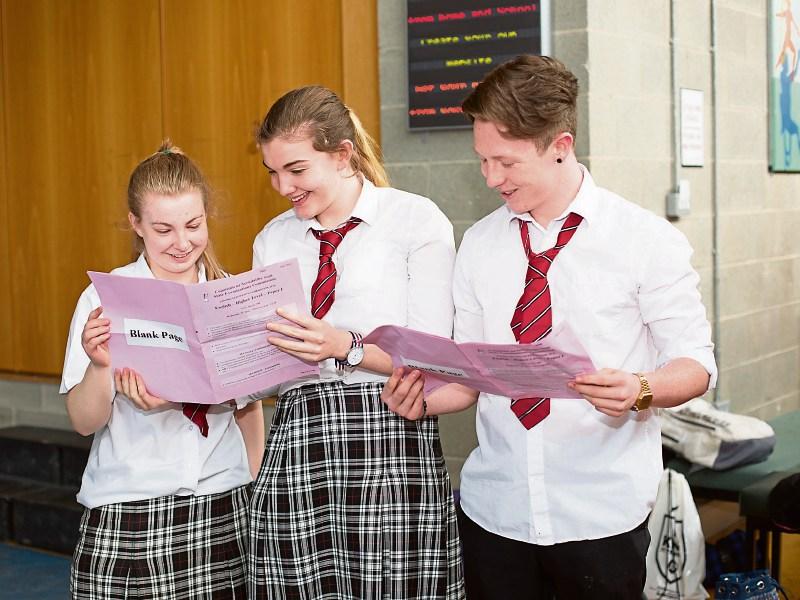 A SPEECH by Barack Obama on space exploration, and an extract from a book on Shakespeare’s universal appeal were just two of the subjects which Limerick students tackled this Wednesday, the first day of the State exams.

Some 2,600 Limerick students are sitting the Leaving Certificate while 2,739 are facing the Junior Certificate examinations over the coming two weeks.

In Colaiste Iosaef in Kilmallock, 65 Leaving Cert students and 80 Junior Certificate students took their seats in the exam hall for the 9.30am starting time when English Paper I was handed out.

“It wasn’t too bad. We had about seven choices for the essays including speeches and short stories,” the Kilmallock man explained.

Ciaran opted to do a short story on a car journey around Kerry.

“In the comprehensions a speech came up by Barack Obama and there was another one on Shakespeare. I did the one on Barack Obama. It was handy enough. It was about the space program they have going in NASA.”

Ciaran, who hopes to study Financial Mathematics in the University of Limerick, wasn’t feeling too nervous despite the pressure.

“It’s just another day really but there will be a few candles lit,” he smiled.

In the essays, Michelle opted for a short story on mistaken identity while in the comprehension, she, like Ciaran, she went for the Barack Obama speech.

Michelle, who hopes to study primary teaching at Mary Immaculate College, is that bit more apprehensive about Paper 2 as it is more study-focused.

“I was a bit nervous this morning but Paper 1 isn’t too bad because there isn’t too much you can study for - you have to kind of just wing it.”

School principal, Sean Twomey, who met with students as they exited the exam halls, said that overall the feedback was positive.

“The Leaving Cert students are just coming out now, I had a quick word with some of them. The first section looked a bit tricky to me but the essays were quite nice. I think the vast majority would have chosen the Barack Obama speech as he is hot in the news at the moment.”

Among those doing the Leaving was Eimear O’Brien from Broadford who seemed reasonably happy with the paper as she emerged from the exam. “It was alright. The question Bs were tough enough but other than that it was okay,” said Eimear of the Higher Level paper.

She was happy that there was a good choice of essays: “they were basic enough which was good”.

Alex Culhane from Kileedy also sat the Higher Level paper. “It was a weird enough paper. Some of it was a bit confusing but we got through it okay,” he said. “Two speeches came up so I was prepared enough for that.”

Overall, Alex said he wasn’t particularly nervous on the morning of the exam, but admits to having experienced “a few butterflies” beforehand.

Evan Murphy completed the Ordinary Level paper in just over two hours, ten minutes. “It wasn’t too bad,” was the verdict of the Dromcollogher student.

Like Alex, he did not suffer from too many nerves on the morning of the exam, but admitted he was not looking forward to the biology paper which is coming up next Tuesday. By contrast, he was confident about the music exam – his last – on June 23. With almost half the marks accounted for in the practical, the accomplished bodhran player was hopeful that the written part of the exam would go well.

Meanwhile in the city, enthusiastic Junior Cert student, Mary-Kate Carolan, of Laurel Hill Coláiste FCJ, said that she was “really happy” with paper one.

Her favourite part of the paper was the media studies question, which allowed students to give their views about current affairs and stories covered by the media.

Deputy principal, Norma Lenihan said that there was a positive atmosphere around the school after the first exam.

“This is when the six years of hard work really starts to pay off for them. They have got a good bit of confidence now. They have had pres, they have done trial runs on everything, and they have an awful lot of the exams done already with various subjects. They have their orals, their practicals and all of that completed.”

Across the road at St Clement’s College, Leaving Cert students Colin Blaney and Shaun Taylor said it was “great ice-breaker”.

Junior Cert student, Gabriel O’Dwyer said he and his classmates “are all getting on grand” and that they were happy with the paper.

Deputy principal, Pat Talty said that the students seem “well-prepared” for the exams, ending on June 23.

“They all look composed and ready for it today. And now that they are finished their first exam, from past experience, they know the seating arrangements, they know the supervisor, the know the setting, and the first one is always the most difficult.”