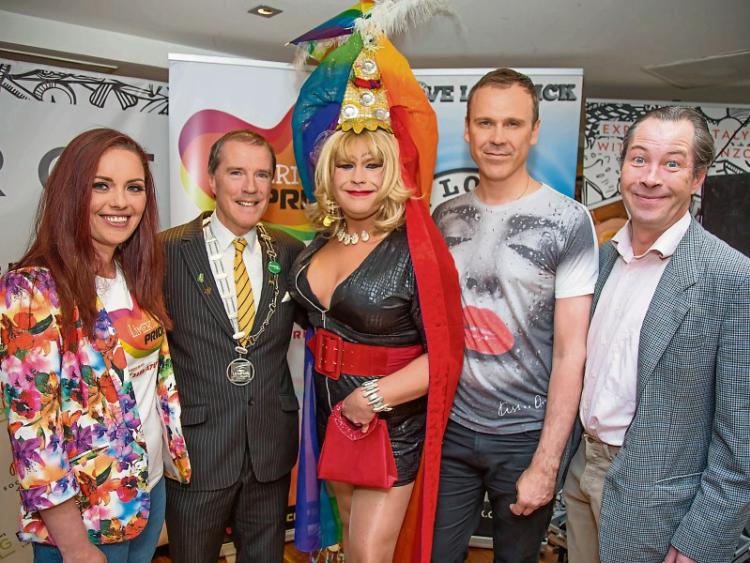 LIMERICK’S upcoming Pride festival will showcase a city that is “truly open and accepting”, using the theme #UnitedColoursofLimerick as its rallying cry.

The 2016 festival, taking place from July 11 – 17, with the centrepiece being a parade taking place in the city on Saturday, July 16, was launched in the George Boutique Hotel this Tuesday night.

Lisa Daly, chairperson for Pride, said there was a “fantastic line-up” with “something for everyone”.

“We want to welcome everyone to join us in celebrating LGBTI culture in Limerick and show Limerick for the truly open and accepting city that she is,” said Ms Daly.

She said Pride 2016 would “build on the success and positive energy of previous years, promoting community spirit, community engagement and celebration”.

“In the last year, the Irish LGBTI community has received resounding support from the wider Irish community in their support of equal rights and marriage equality so this will be reflected in this year’s Pride Parade.

“We will celebrate our freedom and the opportunity we have been given as a community to develop the concept of the family unit within our community,” she added.

Richard Lynch, PRO for the festival, said there would “always be a need” for Pride “as long as others in the global LGBTI community are not as fortunate as us in terms of equal rights”.

“We must fight for our brothers and sisters throughout the world and take a stand for human rights for all,” he said.

“That’s why our theme this year is #UnitedColoursofLimerick. We want Pride to be an inclusive, open and integrated event welcoming all people regardless of their sexual or gender orientation, religion or race.

“This year we aim to put the T back into LGBTI, with a focus specifically on advancing the rights and equality of trans people and their families,” he added.

Broden Giambrone, CEO of Transgender Equality Network Ireland (TENI), will be grand marshall for the parade, and, while he noted that the passage of the marriage referendum was an “incredible moment”, he warned: “Our community still faces homophobic and transphobic bullying in our schools, discrimination in the workplace and violence on the streets.

“We need to do more. Trans, bi and intersex people remain invisible and we must not leave anyone behind. This year’s theme – #UnitedColoursofLimerick – is about inclusion and diversity. It’s about working together to ensure we can all enjoy equality.”

Mayor of Limerick, Cllr Liam Galvin, said that City Hall would be in “rainbow colours for the week of Limerick LGBTI Pride to join the community in celebrating the theme”.

The Mr and Mrs Gay Limerick will take place before the festival, on July 2 at the Pery Hotel, while the official Pride launch will kick off festivities on July 11 at Strokers Gay Bar on William Street in the city.

A Pride Wedding show, an Open Mic night, a Mezz Ladies’ night, the T’was the night before Pride event and more will all take place over the week, while the Hunt Museum will host PrideFest 2016 after the Parade on July 16, with an after-party in Dolan’s.

There will also be an educational aspect to the festival, with support meetings taking place for youth, adult and trans groups, while there will also be free drop in HIV testing at GOSHH on Davis Street.