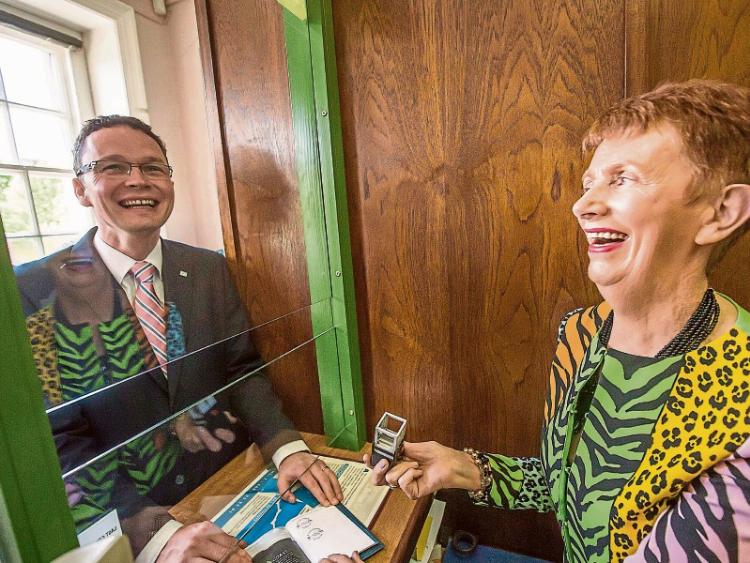 FOYNES was the venue for the launch of the new Wild Atlantic Way passport which aims to encourage visitors to spend more time in the towns and villages along the west coast.

Recently appointed Minister of State for Tourism and Sport, local TD Patrick O’Donovan launched the initiative which is backed by An Post and Failte Ireland.

“The Wild Atlantic Way is already proving popular with visitors – both from overseas and from Ireland,” said Mr O’Donovan.

“We want to deepen visitor engagement and encourage those who travel along the route to slow down, dwell longer and immerse themselves in the local towns and villages of the west coast.

”The local Post Office is at the heart of these communities and the passport is a clever means to build such interaction into the Wild Atlantic Way experience.”

The new passport contains a section for each of the various zones along the route and visitors to discovery points can call in to the local post office to have their passport stamped with a unique motif for each one.

A viewing area overlooking Foynes Island is one of these designated discovery points with its own stamp.

The passport may be purchased for €10.00 at over 130 selected An Post offices, along the Wild Atlantic Way route as well as at Dublin’s GPO and St Andrew’s Street Post Offices.

Fiona Monaghan, Fáilte Ireland’s Head of the Wild Atlantic Way, was also in Foynes for the launch.

“This passport is a wonderful way for visitors to record their experiences along the Wild Atlantic Way,” Ms Monaghan said.

”However, by encouraging visitors to visit local towns to get their passport stamped in the Post Office, we also hope the passport will help to slow travellers down – increasing their dwell time, spend and satisfaction in towns along the route as well as driving an increase in visitor numbers to less visited areas.

“The passport is also neatly placed to encourage a return trip for those that have part-completed their passport – and we will be urging visitors to think about completing their collection of Wild Atlantic Way stamps over a number of years.”

Also this week, Mr O’Donovan welcomed the announcement of €22,800 in funding for local organisations in Limerick under the Local Diaspora Engagement Fund.

Grants totalling €350,000 have been allocated to 105 local and community organisations around the country for projects and initiatives.

“I am delighted that eight Limerick organisations are to receive this funding under the Local Diaspora Engagement Fund in 2016 and I would like to congratulate them on their successful applications to this fund. They undertake great work on behalf of communities across Limerick,” said Mr O’Donovan.

“The Local Diaspora Engagement Fund is designed to promote diaspora engagement at a county, local and community level - in line with the objectives of Global Irish: Ireland’s Diaspora Policy published by Government in March 2015.”

The Newcastle West-based TD added: “The recipients of the fund will be able to use the grants for diverse range of projects including genealogy projects, networking and media initiatives, as well as literary and cultural events involving the diaspora.”