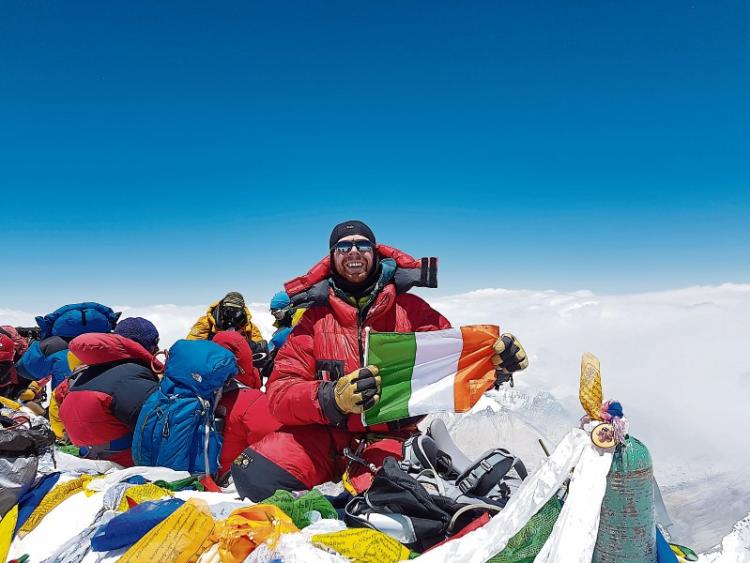 LIMERICK man Rob Mortell spent close to half an hour at the summit of Mount Everest, drinking in the “unbeatable view” on top of the world’s highest mountain.

At just 26 years of age when he topped the fearsome mountain last week, the Caherdavin man has become the youngest Irish person to reach the summit, taking the mantle from fellow Limerick man Mark Quinn in the process, who was 27 when he climbed Everest in 2011.

The former Gaelscoil Sáirséal, Villiers Secondary student and UL law and accounting graduate, speaking to the Limerick Leader from Nepal this Wednesday, said it was a “privilege to have the opportunity to become the youngest Irish person to summit Mount Everest”.

“This achievement came with many obstacles and was hard earned over many years,” he said, expressing gratitude to his employer KPMG and Volvo Ireland for “both their support and sponsorship of this expedition”. The former, in particular, was crucial, allowing him to combine climbing with his training contract.

“Standing on top of Everest is a daunting experience as it represents a wonderful achievement, an unbeatable view and the moment where I am furthest from safety,” he said.

“I spent about 20-30 minutes at the summit as I was both eager to enjoy my time there and keen to leave before I got too cold from not moving,” he added.

Rob, who currently lives in Dublin but whose family – and girlfriend's family – all still live in Limerick, said the support “has been humbling” since his successful summit, but he was quick to acknowledge the strain such an activity inevitably places on his friends and loved ones.

“Everest is a unique place and somewhere that is not always accessible to anybody, so it is wonderful to receive such support from everybody at home,” he explained.

“I'm very conscious of how a climb like Everest can impact those around me. Unfortunately it's not a natural spectator sport as we're so far removed from normal communications and the consequences can be very serious. I had a SPOT GPS tracker on me at all times to help reassure family and friends that my legs were moving the right way – especially on summit day. It's difficult to tell those around me that I'm planning any expedition and Everest was especially tough to break the news at home, but my family was very supportive after the initial shock.”

Rob has been climbing for a number of years, previously participating in a 9-person expedition to the highest peak in North America – Mount McKinley (also known as Denali) in Alaska, also reaching that summit. He has also climbed the Matterhorn and Ama Dablam in Nepal.

But nothing could prepare the Limerick man for the challenges of climbing Mount Everest, he said.

“I was running very low on energy with just 50m to go to the summit,” he explained.

“I told myself I could have one break and if the summit wasn't achievable after that break then I should turn around as my safety was more important.

“This was a particularly difficult stance to take given my proximity to the summit, so I took a long break.

“Thankfully everything worked out but the exhaustion was unprecedented for me after a 12 hour ascent to just reach the summit,” he added.