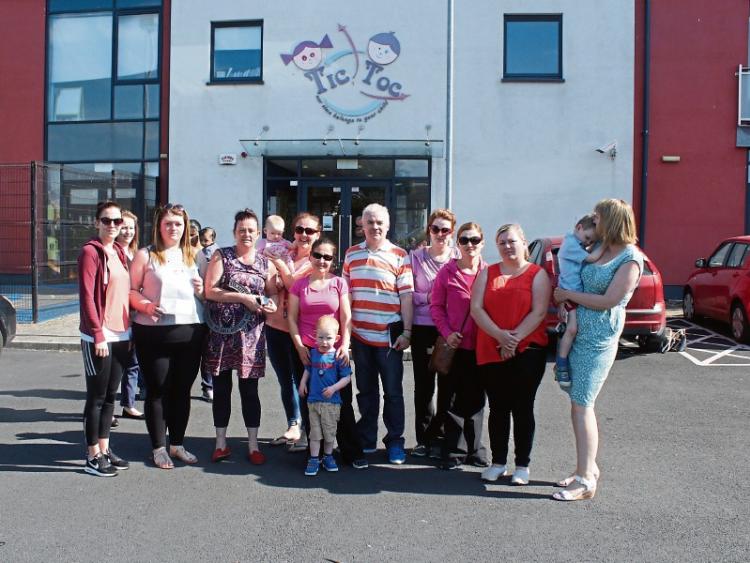 STAFF at the Tic Toc nursery at the Westbury centre are staging a sit in in a bid to get their redundancy dues.

It comes after they claim the company owner told staff that he would not be able to pay them.

Tic Tic’s branch in Westbury closed this Friday morning, with the loss of ten jobs. Its outlets in Newcastle West and the Riverpoint complex in the city centre also closed bringing the total number of jobs lost to around 40.

However, Minister of State Patrick O’Donovan says after talks with Tic Tic’s owners and the lenders in question, he has secured a commitment that the Newcastle West branch, at Killeline, would reopen on Tuesday with a new operator at the helm.

But it remains unclear what will happen with the other two branches.

Rose O’Donnell, who has worked at the Westbury centre Tic Toc branch the last nine years, says staff will remain in the complex for as long as it takes to secure commitments from the owner.

The Westbury creche cared for around 70 children, while it is understood some 70 families are affected by the closure in Newcastle West.

Parents of children attending the creches were "shocked" this Friday morning to find that the facilities are to close when they turned up with their children.

Staff member Rachel Quinlivan from Westbury said: "I was in shock. I did not receive any letter, or any phone call to say the creche was being closed this morning. We are just all devastated. I am here five years. This is my livelihood. I'm getting married next week, and things are just all over the place now. But it's the parents I really feel sorry for".

The letter says that “since the property crash, the Bank of Scotland were always very supportive of the business, but last year the debt relating to the properties and business was sold to an international fund. This fund does not have a mandate to support the business in the future and last Friday they informed us that they were not able to fund the business in the very difficult summer period”.

“We have completed a review of the future income and unfortunately, even though numbers of children are going up with the the introduction of the extended pre-school year, the income is projected to go down. The local market does not have a need for full time Creche places, which makes the Creche unviable.”

The letter says that “funds allowing, we intend to pay this week’s salary on Friday and you will be entitled to holiday pay and a redundancy payment”.