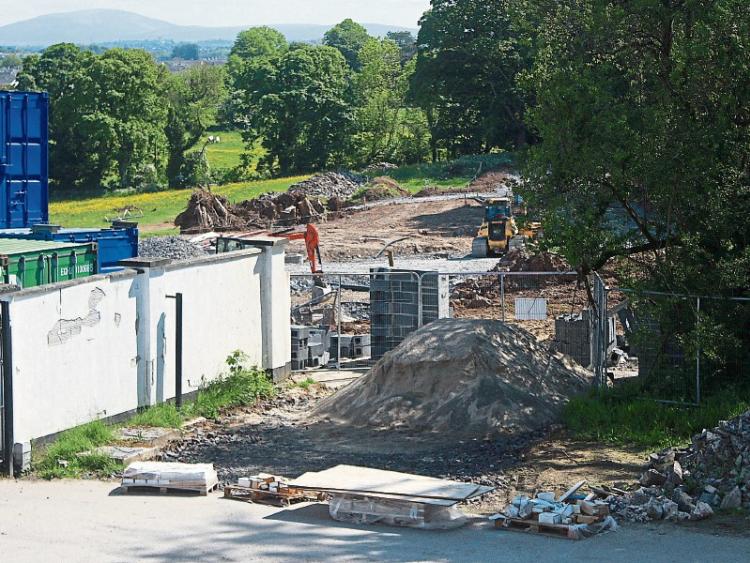 A LOCAL resident has claimed that construction work on the new access road to the Mungret College site has interfered with his septic tank, leading to health problems for himself and his family.

Wayne Buckley, whose house overlooks the route of the new distributor road, said he noticed a bad smell in the area shortly after work got underway in mid-March.

Upon closer examination, he discovered that raw sewage was leaking from his septic tank after construction work left the percolation area exposed.

“Despite numerous conversations with the contractor and Limerick City and County Council representative on site of a smell of raw sewage, I have been repeatedly told it is just a smell of sulphur from digging up the rock in that area,” he said.

Mr Buckley subsequently took a video which appeared to show raw sewage flowing on the construction site from his septic tank.

“​This is due to the contractor excavating alongside the tank which is also the percolation area,” he explained.

“This area should not have been excavated until a new storm and sewer pipe were connected which the contractor and Limerick City and County Council have failed to do. As a result we have had health issues arise in the form of rashes and ill health in our pets.”

According to Mr Buckley, he and his partner experienced rashes, as did visiting friends, after a rock crusher was used to clear the site.

“After they brought in the rock crusher, the whole house was destroyed with dust, the clothes on the clothes line, everything was covered.”

He believes that some of the material that was crushed may have had effluent on it and that this became airborne.

After he raised his concerns with the council, a temporary pipe was put in place to channel the outflow from his septic tank into a main sewer. However, he alleged that this has been knocked out of place and left unattached on a number of occasions since.

“This is not acceptable and action needs to be taken. It is most unhygienic and against the law to allow the septic tank to empty above ground and it has been left to do so for too long,” he said.

Mr Buckley pointed out that the septic tank in question serves his own home as well as a neighbouring business.

He also raised concerns with the council about potential damage being caused to his 200-year-old home as a result of the ongoing works.

”There’s a basement in my house and it is sitting on the bedrock,” he explained.

“We had vibrations in the basement and it knocked over pictures on bookshelves in the house while they were doing the rock breaking.”

He claimed that it was agreed with the council that this work would cease until a vibration monitor was installed, but that this had not happened.

The Mungret man also said he was concerned about the lack of traffic management measures on the Mungret road despite the large volume of heavy machinery being used on the project. “Where the machines are crossing at the end of the road is a blind bend and there is no traffic management on the road,” he claimed.

Work on the new distributor road to serve the park and schools got underway in February and, according to the site notice, was due to take six weeks to complete. As part of the work, nearby Moore’s Lane remains closed until July.

It is also planned to close the road from Quinn’s Cross to Mungret village roundabout for four days from July 4 to 8 to facilitate the works.

Limerick City and County Council was given an opportunity to respond to Mr Buckley’s allegations but had not done so at the time of going to print.