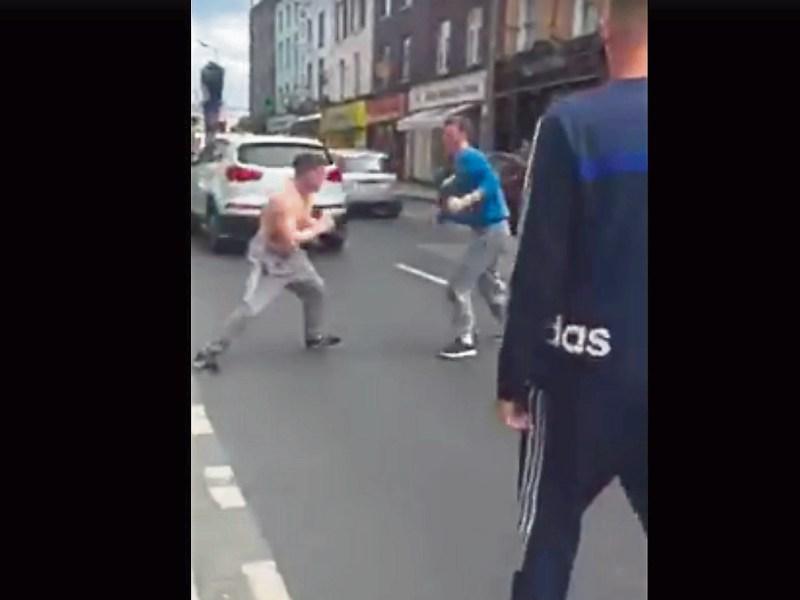 THERE has been widespread condemnation of a bare-knuckled fight which took place in a popular city centre street this week.

Gardai have launched in an investigation into the circumstances surrounding the incident, which saw two men fighting in the middle of William Street.

It is believed the shocking scenes, which brought traffic to a standstill, took place just before 4pm on Monday afternoon.

A mobile phone-shot video of the fight was uploaded to the social networking site Facebook on Monday night, but was taken down the following day after it was viewed thousands of times.

Throughout the video, another man can be heard shouting instructions to the men as the fight moves between the footpath and the road.

He can be heard encouraging them to throw punches “uppercuts” and “jabs” at each other.

A number of William Street traders contacted by the Limerick Leader declined to comment when given the opportunity.

But shoe-shop owner Michael Gleeson said: “It’s scary this kind of thing can happen on the street, and it highlights how necessary it is to have a garda presence every day.” Mr Gleeson said he was not present when the incident took place, but some of his staff members witnessed the fight.

“It was very frightening for them,” he added.

Chamber chief executive Dr James Ring said: “It is very disappointing. My first reaction is that it is just stupidity. It is one of those things which can happen at any time and anywhere.”

Many traders have privately expressed their disappointment that the gardai were not on the scene in William Street sooner, with the fight allowed to develop to an alarming extent.

Dr Ring said: “It is an indication of how stretched the guards are. After successfully tackling the gangland scourge in the city, one thing the Chamber will be lobbying hard for is the need to ensure the city centre does not suffer again in this way.”

He pointed out the business group is having monthly meetings with the city’s top gardai, and issues like this will be on the agenda.

Fine Gael senator Kieran O’Donnell, who used to have his constituency office in William Street, said he would also be raising this fight with the force.

He said: “This sort of behaviour should not be happening in the city centre. It is very unfair to both the traders and people shopping in the town, the elderly, and families with young children. It is completely unacceptable. It is something I will be taking up with An Garda Siochana in a bid to ensure this type of behaviour is stamped out.”

“It is distubing to see such activity on the streets in broad daylight,” he said, adding gardai are satisfied with the progress of the investigation.

If you have any information on the incident, Gardai at Henry Street can be contacted at 061-212400.