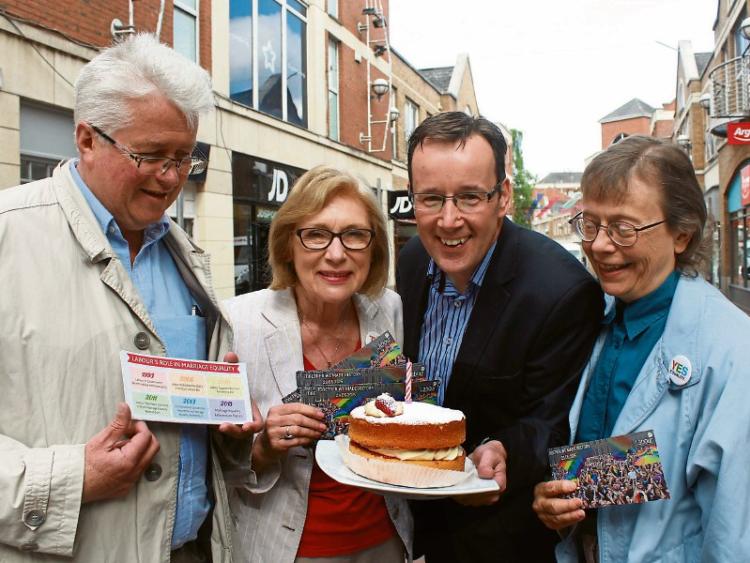 LOCAL political parties have marked the first anniversary of the day the people of Ireland voted overwhelmingly in favour of marriage equality for the LGBT community.

Ahead of the anniversary, the Minister for Social Protection,  Leo Varadkar, revealed that Limerick had the third-highest number of registered same-sex marriages in the country.

As of last week, there have been 25 same-sex marriages registered and 50 notifications received, in Limerick. There have been 43 in Cork, and 213 in Dublin.

Labour TD, Jan O’Sullivan said that it was a “very positive” campaign.

“While the Labour Party were in Government, we were able to put it on the agenda and ensure that there would be a referendum. But, certainly, the actual winning of the referendum was a cooperative venture for so many different people.

“We campaigned with the Marriage Equality group, who came from various different political perspectives, but all had the one end in mind. We all canvassed together. It was a campaign that really brought out the best in the Irish people.”

Fine Gael councillor Michael Hourigan said it was a “great day for Ireland. There should be no discrimination in Ireland, and we need to progress forward. And the passing of the referendum says a lot about Ireland today. If someone wants to get married, they should be able to.

“I was very happy with Fine Gael’s part in the campaign. Labour played a part too, but it was the Government at the time that got the legislation through. It was a job well done by all involved,” said the former Mayor of Limerick.

Cllr Malachy McCreesh, Sinn Féin, said that he was glad his party and a number of lobby groups were able to take part in the “intensive campaign”.

“It’s great to see that people have taken advantage of this from a legal standing, too. It was great to see so many groups and people of all ages taking part in the campaign,” he commented.

AAA councillor, Cian Prendiville said that people in the LGBT are “more confident about coming out” and that more barriers need to be knocked down for the community, such as the ban on blood donation.

He added that the next equality issue on the agenda is the campaign to repeal the 8th Amendment.

Cllr Joe Leddin said that it was “very important” for the Labour Party to mark the referendum’s anniversary.

“One year on, I think as a party in Limerick, it was important that we would acknowledge the achievement that we have made as a party. Many others were involved, but I think it recognised that, without the Labour Party, marriage equality today would certainly not be enshrined in law.”

Attempts to contact a number of Fianna Fáil councillors for comment before going to print were unsuccessful.