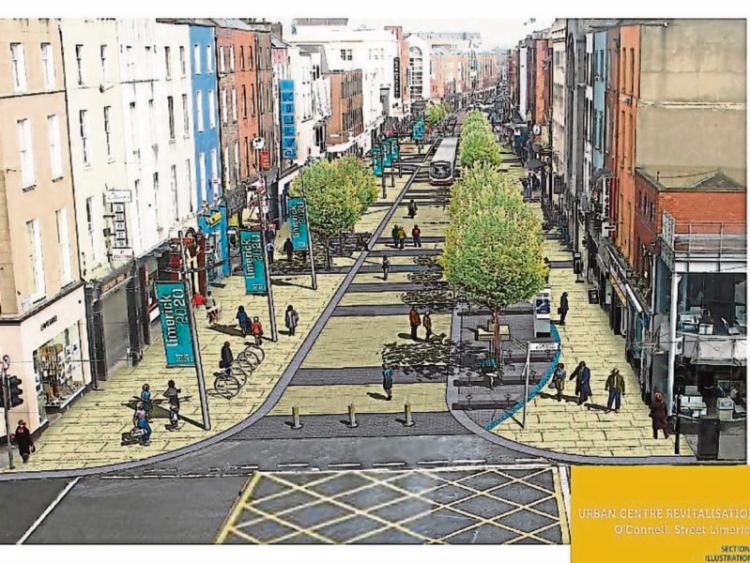 An artist impression of the planned works, supplied by Limerick City and County Council

THE much-anticipated pedestrianisation of O’Connell Street has moved a step closer, with the council poised to appoint a design team to the multi-million euro project.

The council is seeking to put in place a “multidisciplinary consultancy service” to both design and deliver the “urban revitalisation” of O’Connell Street, which is being made possible with €4.5m funding from Europe.

This will be matched by the local authority, with the project to be completed by 2018.

In tender documents, the council says is is seeking a partner which is capable of providing a series of design services including in the fields of consultancy, planning, transport planning, urban space design, road design, structural design, plus electrical and mechanical, public lighting, and environmental studies.

The overall project will start from the Denmark Street junction.

Council bosses hope the work can commence early next year, with an expected construction period of between 12 and 18 months.

A minimum of 50 construction jobs will be created, the local authority has previously stated.

Once a consultant is in place to deliver the project, a public consultation and planning process, which will allow the public to have a full say and councillors ultimately decide upon, will get under way.

A traffic plan will also be forthcoming, with an emphasis on prioritising public transport.

Fianna Fail’s leader in the metropolitan district Cllr James Collins said one of the concerns related to pedestrianisation is the effect it might have on the urban area in the evening-time.

“There is a lot going on, and this is one part of the jigsaw for the city centre in terms of improving the public realm. I know the Limerick Chamber is watching this with great interest. It is something which, if it is done correctly, could be a really good thing.

“But we need to make sure everybody involved in this project from design to delivery brings the best project for Limerick City, and ensures it is a relative success,” he told the Limerick Chronicle.

While only a portion of O’Connell Street will be pedestrianised, it is expected the entire street will see improvements thanks to this project.

Senior planner Kieran Reeves has previously said: “You are going to see new street lighting, looking at the whole issue of the wirescapes, the bins, all of that street furniture being done, some planting on the streets, the road signs being done properly –  there is survey work to be done looking at basements.”

The deadline for consultants to express an interest in taking on this project falls next Thursday, June 2.

It is then expected the council will formally appoint a party to carry out the €9m scheme, with plans forthcoming a short time after that.