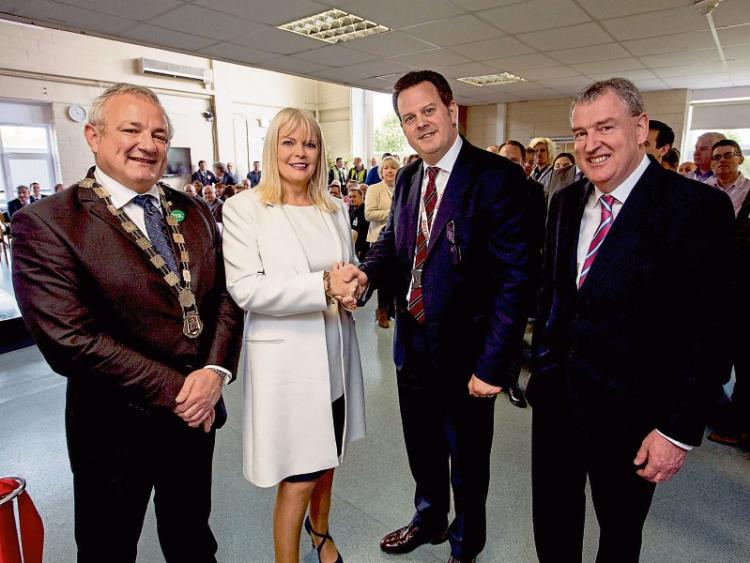 THE new Minister for Jobs recently cut the ribbon at the launch of a new, 100,000-square factory that will serve Regeneron’s pharmaceutical plant in Raheen.

It is believed that the new Exertis Supply Chain Solutions facility could create up to 40 jobs in the city.

Approximately €2m has been pumped into the new Raheen Industrial Estate project, which will safely handle, store and distribute over 4,000 pallets of temperature and humidity sensitive bio-pharmaceutical materials . It will also service the largest bio-pharmaceutical production facility in Europe in the shape of Regeneron, according to a spokesperson for Exertis.

“I am delighted to be here. This is a really good news story. It’s great to open this facility and that you’re going to have 20 extra people working here,” she said.

Company sources have said that the number of employees is expected to grow.

The Minister added: “We have been here in Limerick, over the last number of days, on a trade mission, and when IDA told me about it first, I imagined that I would be flying off to some exotic destination. But I am delighted. It’s a trade mission in Ireland, and what it is, is our indigenous Irish companies doing business with the large multinationals and the large foreign direct investment. What we are doing is bringing the companies together, and what we want the smaller companies to do business with the larger companies.”

A spokesperson said the project is “expected to help generate significant future employment as local businesses capture value from the activities of foreign direct investment”.

Exertis has operations in a number of countries worldwide, with more than 2,000 employees. Deputy Mitchell O’Connor’s visit to Limerick is the first by one of the new Government ministers.