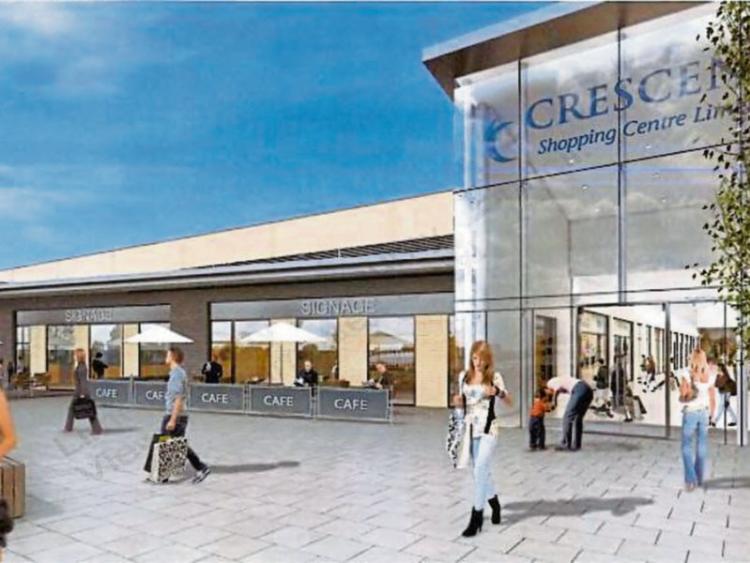 Artist’s impressions show a public plaza to be built on the northside of the complex Picture: BKD Architects

APPROVED plans to deliver a makeover to the Crescent Shopping Centre’s shopping experience were welcomed this week.

This week, Limerick City and County Council gave the go-ahead to the Dooradoyle complex to undergo a major expansion to their retail, café and restaurant space, with the inclusion of a new, landscaped public plaza.

The plans, which were first lodged on March 24, also include the raising of ceiling space in various malls; the reconfiguration of seven external units and one unit, which will provide six internal units; the creation of five new external units, and three of which will cater for restaurant, café and deli-bar uses.

Metropolitan mayor, Cllr Jerry O’Dea said that he was “delighted to see further progression” and the prospect of construction and retail jobs being created.

“I had a look at the plans, and it seems that they will aesthetically, very much so, improve the appearance of the Crescent Shopping Centre. I think it is a very positive move. People will comment that the city centre needs similar rejuvenation, and we are working hard at that. The Crescent is a great asset to Limerick. I personally think that the traffic management will be the big focus of the extension.”

He added that, while the city has seen “some successes” in recent times, he said that the Georgian buildings do not offer the floor space that some companies require.

“We are working hard on the strategic plan for the city, and hopefully that will give the companies that want to come in, the size and style of space they need. And that is a work in progress,” he said.

City trader, Helen O’Donnell told the Leader, while she welcomes the council’s approval, she said that they would like the bigger chains to operate in the city centre.

“The challenge is to provide the type of units that high street shops want, and unfortunately our Georgian buildings don’t lend themselves to that, and we have limited enough units that will attract some of the bigger chains that are in other cities. And some retailers can be fussy about who they are right next door to. It’s about the retail mix in the city,” she said.

When the plans were first lodged, Pat Kearney, of Rooney Auctioneers, who worked on the delivery of the Crescent Shopping Centre in 1973, said that the city “needs to be more appealing” to customers and retailers.

The council also approved of the relocation of 41 car parking spaces, the provision of 24 bicycle parking spaces and an upgrade to the junction at the County Library.

According to planning files, the HSE’s environmental department service had no objections to the Dooradoyle shopping centre’s application. However, the HSE stated that the preparation for all food units shall be discussed with the HSE before construction commences.

The Limerick Leader contacted management at Crescent Shopping Centre a number of times on Tuesday, but they were unavailable to comment.