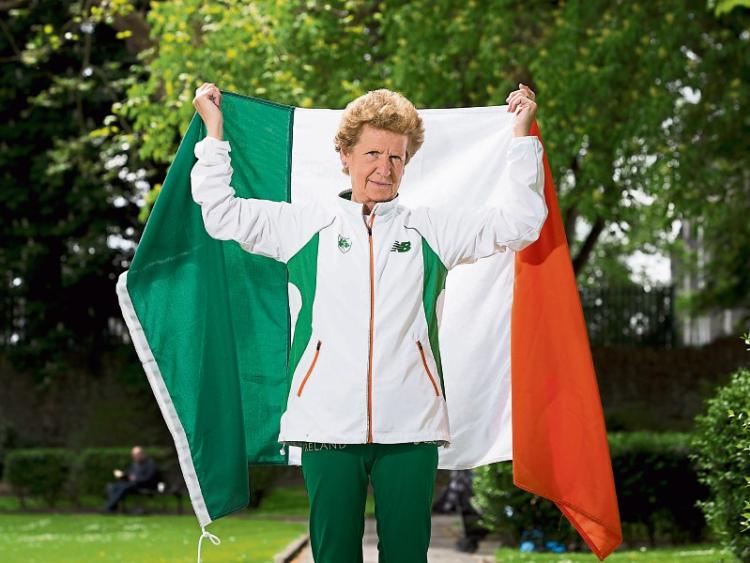 Mary Cronin, who will compete in the European Road Masters Championship

MARY Cronin is living proof that age is no barrier to sporting excellence.

The 72-year-old Croom woman will this Friday take part in the 10k run in the European Road Masters Championship in Portugal.

Speaking this week from the Algarve, where she is preparing for the race, sports-mad Mary said the event was “like the Olympics” for her.

And while she says she does not harbour any ambitions about winning, she is aiming for a finishing time of around 71 minutes – a time that many people half her age would be proud of.

The County Galway native, who has lived in Croom for almost 40 years, was always a fan of running.

“Even when I was a child in school, the nuns use to kill me because I used to be running around the place,” she said.

“Road running is my thing. It’s obviously not for everyone but there are any number of communities that older people can get involved in and, indeed, contribute greatly to.”

Last April, Mary was appointed chair of the Older Peoples’ Council – an initiative of Limerick City and County Council aimed at empowering older people in relation to what they can do rather than allow them regret what they no longer can do.

“I really believe we are onto something here in Limerick. The local authority has started what I believe will be something special and they are definitely on the right track.

”They are really enabling a thought process around how we make Limerick a place where older people feel just how much of a contribution they have to make to society.”

And she firmly believes in the need for more cross-generational links. “The reality is that older people have a huge contribution to make but they must be encouraged to make it. They must be made feel part of a community and have a lot to contribute to community.

“For example, older people are ‘life-professors’. They’ve all had their ups and downs and have lived to tell the tale. That’s a wealth of wisdom that they can pass onto young people, to help them prepare for life, for the tough times ahead. So, if we can bring young and older people together more, it can actually be mutually beneficial.

“We talk a lot in Ireland about twining cities and towns but what about twinning people, young and old people. Older people can be what I call ‘learner friends’.  Think about the shared benefits.”

Mary says her experiences have included moments when friends had to be there to help her through dark days.

“I had the darkest of days in my own life and good friends brought me through them.

“They were able to see that something was wrong and helped me through it.

“There is no age barrier whatsoever to being a friend.”