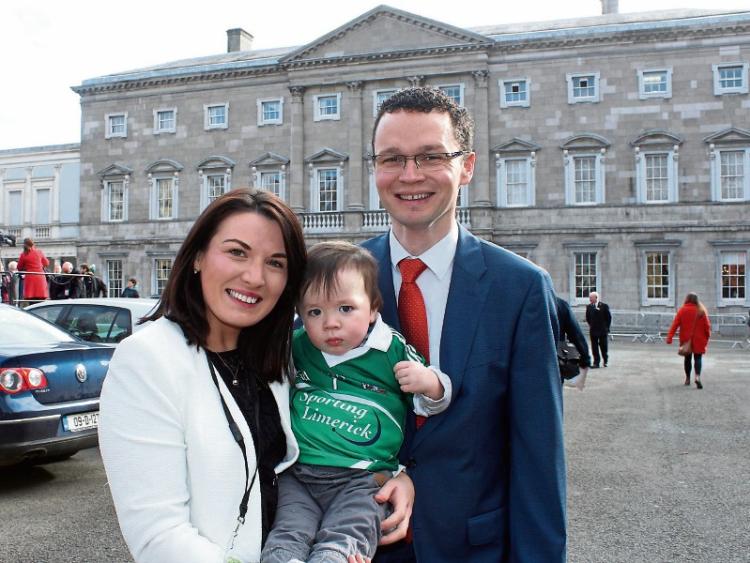 Also there to congratulate him was fellow Fine Gael party member and Mayor of Limerick City and County, Cllr Liam Galvin, who described the appointment as a “just reward” and a “massive achievement”.

“It is great as Fine Gael Mayor to welcome back the first-ever Fine Gael Minister back to West Limerick,” Mayor Galvin said. “I am delighted for him, his family, supporters and staff and the people who campaigned for him.”

“I am delighted to come home,” the newly minted Minister of State said.

“This is a huge occasion for me. To be a Minister in a government from the background I come from, the family I come from, it is really a huge honour.”

And he recalled his late father John, saying: “I know he would be so proud of me today. I have been very  blessed with the family I come from, with the family I have and the supporters I have stretching from Abbeyfeale to Doon.”

Minister O’Donovan told the crowd of supporters who gathered at his constituency office that  he was getting ready to come home when the call came from Taoiseach Enda Kenny.

“It is a huge portfolio,” the new Minister of State said. “Especially in the year that is in it with the Olympics and the European Cup.”

And he joked: “It is a long way from Churchtown to Rio. I probably will have no problem getting into a Munster final now.”

Tourism, he said, is hugely important to the Mid-West, to the West of Ireland and indeed to every constituency.