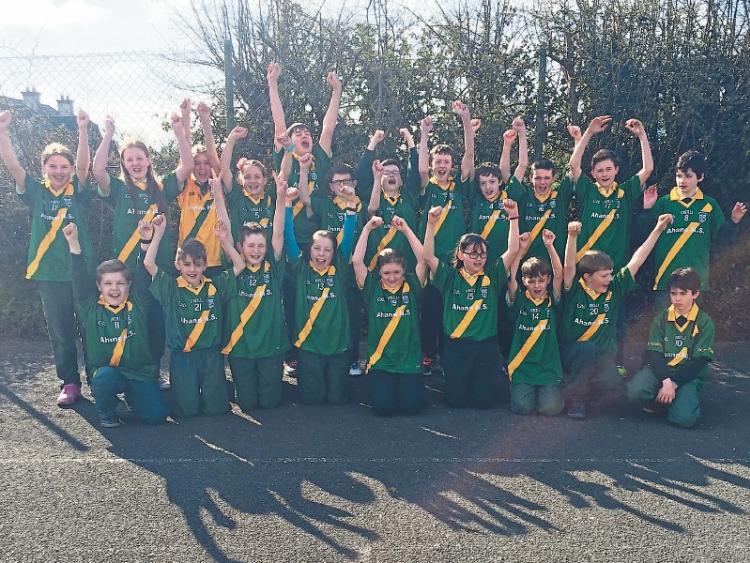 Three cheers for Ahane National School: Pupils model their new jerseys thanks to fundraising efforts in the community

AHANE National School pupils show their delight at having brand new jerseys thanks to a bingo fundraiser.

Principal, Liz Kiely, said over €4,000 was collected from the event in Castleconnell parish hall. Children from fifth and sixth class modelled their new gear in a special outdoor assembly.

“It is at least ten years since the sports teams got new jerseys. Michael Herbert led them in a lap of the yard with a march he played on his tin whistle.

“The children gave three cheers to the models. The local club, Ahane GAA have been of great support to the school again this year,” said Ms Kiely.

“It was a very successful community event with a team of parents, teachers, board members, and parish priest Fr Brendan Kyne, who dedicated time and effort to creating a wonderful Sunday afternoon of bingo.

“This was hugely supported and raised over €4,000 for the school. The event was sponsored by local businesses which really helped,” said Ms Kiely.

The school and pupils weren’t the only winners as many cash prizes were taken home by players.

“I was delighted with this show of support for the school. In collaboration with the parents association, the music programme is already in place with the sound of music flowing through the school. Some funds were put to immediate use in the day to day running costs of the school and the new PE equipment is due for delivery any day. The board of management are delighted to report that building of the new classroom has been signed off and approved for commencement shortly.

“The support of the local community, neighbours and the parent association in this fundraising event was fantastic. It was felt by everyone. Additional chairs to seat over 120 people had to be borrowed at short notice and locals gladly gave them,” she said. The school term may be coming to a close but pupils will have new jerseys for years to come and hopefully some will go on to wear the famous colours at senior level.