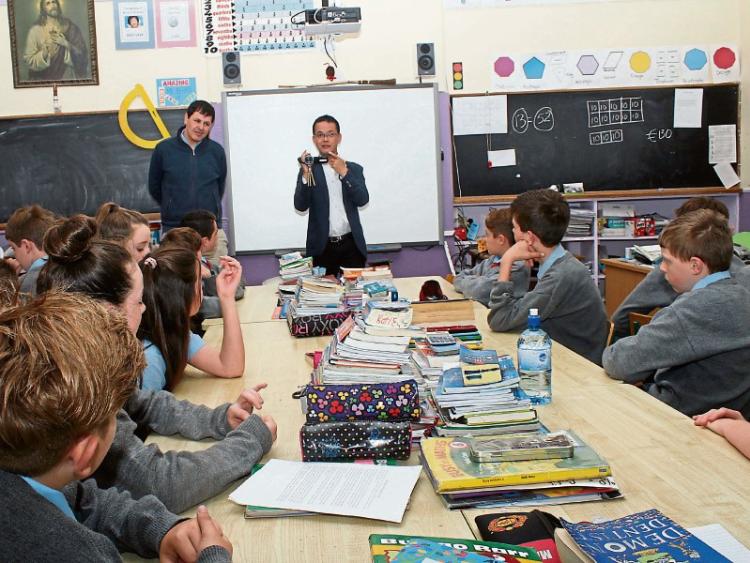 Fifth and sixth class pupils in Ahalin NS, Knockaderry and their teacher Cormac Behan with Shinya Sugizaki, a staff journalist from the Asahi Shimbun newspaper who travelled from Japan

THE politically aware pupils of Ahalin NS in Knockaderry have tested and tasted people power and found it works.

In about the same time as it has taken our newly elected TDs to even agree to form a government, the Knockaderry pupils have already delivered on some of their  manifesto promises and have raised the money to deliver the remainder.

“We should be in government,” grinned Gary Storin this week as pupils relived their own school election which took place in tandem with the general election in February and was reported in the Limerick Leader at the time. It was that story which went online which brought Japanese journalist, Shinya Sugizaki to Ahalin school on Monday.

There, the fifth and sixth class pupils explained how, in the run-up to the February election, they  set up  their own political parties, wrote their own manifestoes, produced their own campaign slogans, posters and videos and canvassed the entire school population for votes. They also appointed a returning officer and a team to count the votes.

After an exciting and fun campaign, the school returned three winners from a list of six candidates.

Instead, their teacher Cormac Behan explained this week, the pupils wanted to know what would happen their manifestoes and campaign promises. They wanted action, in other words. And they undertook to organise a Fun  Day at the school to help pay to make the campaign slogans a reality.

The fund-raising involved a sale of used games and toys as well as organising all sorts of pay-in competitions and almost €800 was raised, Mr Behan said, adding that the manifesto promises had also been brought to a staff meeting.

Already, the pupils pointed out to the Limerick Leader this week, some promises such as new library books, locks on toilet doors and individual coat hooks for each pupil have been delivered on. Others such as a Buddy Bench and giant outdoor PE equipment are on the way, to their great glee and satisfaction. “It has been very empowering for them,” Cormac Behan said.

The pupils just grinned and savoured the sweet taste of success.

Significantly, the Ahalin pupils included in their  “programme for improvement” the ideas of the defeated as well as those of the successful candidates. And, let our adult politicians take note, this was achieved  without a trace of rancour or one-upmanship and without weeks of talks.

“I am very happy,” said Colm O’Connor, a successful candidate for the Playground party. And for him, the big bonus was: “We didn’t lie.”

And while he, along with several others including Eoghan Doherty, have loved their first taste of elections and power and are hugely enthusiastic about being involved in politics when they are older, one or two demur. “I wouldn’t like it because a lot of politicians are hypocrites,” said Liam Barrow.

Shinya Sugizaki, who had spent the previous weekend observing the count in the Northern Assembly elections, was clearly impressed with the pupils’ grasp of the intricacies of the Proportional Representation and the vagaries of the Single Transferable Vote.

In Japan, he told them, voting is on a first past the post system and a lot of votes are wasted. “I would like my readers to know about this system.”

He quizzed the children closely on how PR works, on its advantages and disadvantages. “Your vote still counts even if your number one doesn’t get elected. Your number two still counts.” explained Eoghan Doherty.

“It was very close and intense,” said Gary Storin, explaining how the third seat was filled on the last count.  Others explained to him how the counting was done and how they made their decisions.

But they were delighted too that Ahalin and Knockaderry was going to go big in Japan where  the Asahi Shimbun, sells over 10m copies a day.