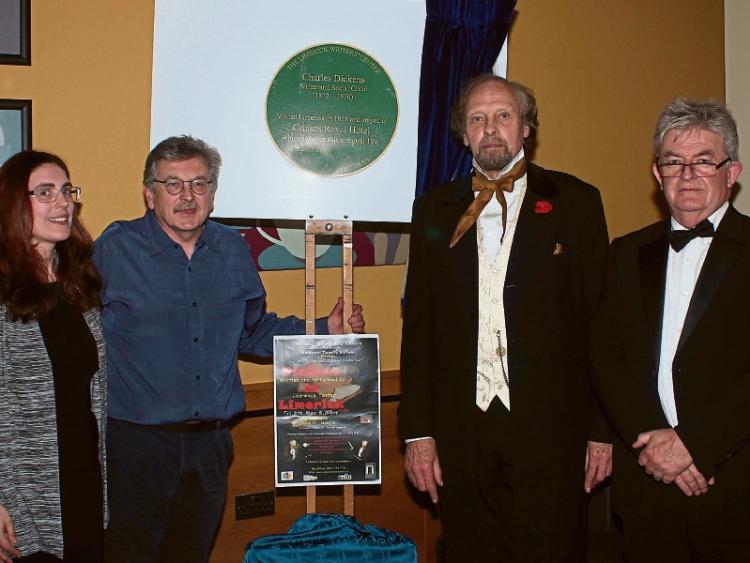 Pictured at the unveiling of a plaque were Sharon Slater, Dominic Taylor, Laurence Foster, and Donal Thurlow Picture: Michael Cowhey

LORD Alfred Tennyson, Franz Liszt, Daniel O’Connell, Richard Nixon, and Ted Kennedy are among “a long, illustrious list of people” who once stayed in the former Cruises Hotel on O’Connell Street.

Demolished in 1991 and currently occupied by Costa Coffee, the premises on George Street, as it was formerly known, has now been earmarked to tourists and locals alike for another famous connection.

Charles Dickens stayed in the hotel in 1858, during an Irish tour of his work, and the Limerick Writers' Centre on Friday last unveiled a commemorative plaque in his honour, as part of their growing literary trail throughout the city.

“This is part of our ongoing mission to record publicly the literary heritage of Limerick and we’ve been on this mission for quite a while,” said Donal Thurlow, one of the directors of the writers’ centre.

Dickens wrote to a nephew from Limerick nearly 158 years ago, describing it as “the oddest place of which nobody in any other part of Ireland seems to know anything”.

“I read in the Theatre [Royal on Henry Street, now demolished] – a charming Theatre. The best I ever saw, to see and hear in. I am bound to say that they are an admirable audience. As hearty and demonstrative as it is possible to be. It is a very odd place in its lower order aspects, and I am very glad we came, though we could have made heaps of money by going to Dublin instead,” he wrote.

Plaques have already been erected in the city in memory of the war poet Robert Graves at the Locke Bar, the poet Desmond O’Grady, outside ‘his spiritual home at the White House bar’, in honour of the city’s only Pulitzer Prize winning author Frank McCourt at South’s bar, where he enjoyed his first pint. Richard Harris, who was also a poet as well as an internationally renowned actor, is remembered with a plaque outside his ‘second home’, Charlie St George’s bar.