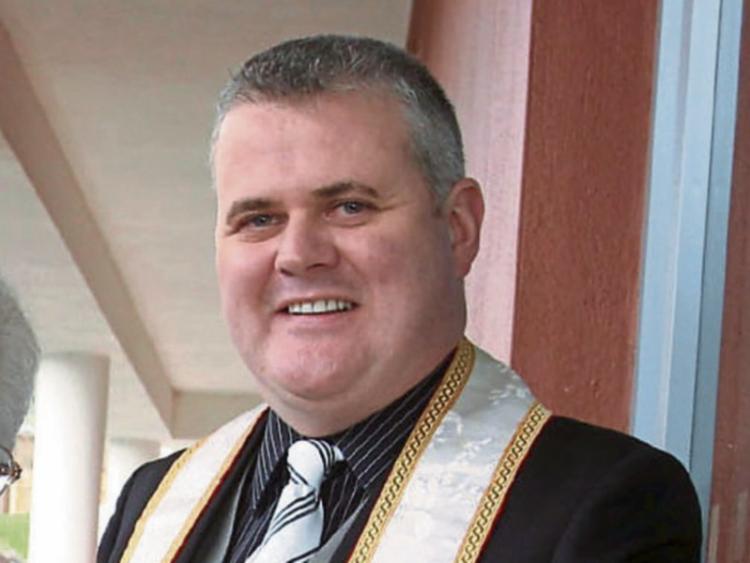 Fr Sean Fennelly, chairperson of Lough Gur Historical Society who designed the cover of the journal

A GOLDMINE of information on history, folklore, people, places and points of fascination has been made available to the people of Lough Gur in the form of the 18th edition of their popular biennial journal.

This year’s publication is a special edition to acknowledge and remember the Rising as a key event in Irish history. There is also a fine selection of other submissions not related to the events in Dublin 100 years ago.

In 1916 Easter Monday fell on April 24. Because of this a number of events took place throughout the country on the same date this year as part of the ongoing commemoration and celebration of the centenary of the Easter Rising.

One such event took place at midday in the Heritage Centre, Lough Gur when the Lough Gur and District Historical Society launched the 18th edition of its biennial journal, the first edition of which was published in 1985.

“While the area around Lough Gur was not directly affected by those events at that time, it is appropriate,” said the society’s chairperson, Fr Sean Fennelly, “that this journal should remember the Rising and those who participated in it”.

In this regard a number of articles in this edition relate specifically to this seminal event. These include the reprinting of a letter written by Kilmallock woman Mrs Genevieve Reid, who witnessed the Rising and gives a daily account of what she saw from Thursday, April 27 to Saturday, May 6, an article written by the late Professor Denis Crowley of UCD, who recollects an Irish Volunteer parade by Lough Gur in September 1915 which was addressed by Eoin Mac Neill and a profile by renowned Limerick historian, Liam Irwin, of Ned Daly of Limerick who was the youngest of the 16 men executed after the Rising.

John Sheehy from Hospital profiles his granduncle Eamon Ceannt and Michael O’Sullivan contributes a brief item on The O’Rahilly (killed in action in the Rising), who was married to a woman with Hospital connections.

Contributions from others on other aspects of the Rising are also included. The front and back cover of the journal were also inspired by the rebellion and they too are an attempt to pay tribute to the event that created the Irish Republic. The front cover was designed by Fr Fennelly.

But this edition also consists of other contributions on the history, heritage, genealogy and archaeology of the Lough Gur area and beyond, as well as other features of Ireland’s past. Three poems are also included, as is an article, on the English poet Ted Hughes, who was a well known visitor to Lough Gur where he fished for pike on many occasions.

That article was submitted by Mark Wormald, Professor of English at Pembroke College, Cambridge.

“There should be something of interest to all among the 170 pages of this publication,” said Sean Gallagher, editor of the Lough Gur and District Historical Society Journal 2015-2016.

“In fact, it is the largest of the 18 journals published to date by the society. A number of the articles reveal interesting, though probably little known, aspects of the south-eastern part of the county.

“For example, Eddie O’Dea writes about a Carmelite monastery in Kilteely in medieval times, while Garry Ahern reveals that Caherconlish produced a renowned artist in Norman Garstin (1847 to 1926). Mary Slattery of Pallasgreen gives an account of her distant relative, Fr Nicholas Sheehy who was executed in Clonmel in 1766.

A delightful article that was first published in 1865 tells us of a day trip to Lough Gur. That item was discovered by Michael Quinlan who said that ‘it could just as easily have been written 151 days ago instead of 151 years ago!’”

The Lough Gur and District Historical Society Journal was launched by Sr Claude Meagher of the Presentation Convent, Hospital, and is available for sale at €10.