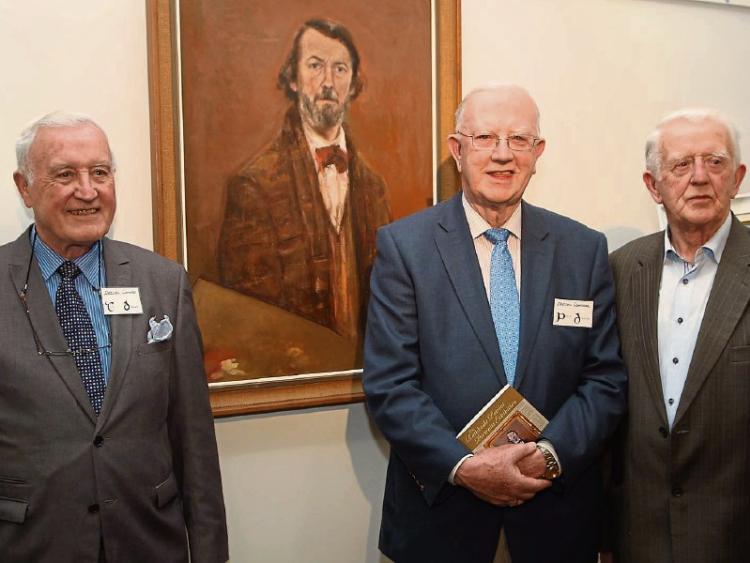 At the Patriot Portraits exhibition in Rathkeale, brothers Terence, Peter and Donie Donovan stand beneath the self-portrait of their brother and artist, the late Jack Donovan

SEVEN patriot portraits, painted over the course of 12 years by the late artist Jack Donovan have been welcomed “back to Rathkeale”.

And the exhibition of the portraits will continue until the end of May, Jack’s brother Tim Donovan, told the huge number of people who filled the Rathkeale Arts Centre for the launch.

And while Tim explained that it was their uncle, Capt Michael Madden who”masterminded” the idea of the patriot portraits back in the late 1960s, it was Tim who was the main driving force behind their restoration and the exhibition itself.

The portraits have hung in the officers’ mess in Sarsfield Barracks, Limerick since they were created by Jack between 1969 and 1981. They include Patrick Sarsfield, Con Colbert and Edward Daly, as well as Michael Collins, Liam Lynch, Seán Wall and Seán Finn.

A self-portrait of Jack was also unveiled at the exhibition along with a painting of Tim Madigan, Shanagolden, shot during the War of Independence. Both were presented to Sarsfield Barracks and the Irish State as gifts.

“The brief, in talking to the relations was to paint portraits that would capture a likeness,” Tim Donovan said. “When I look at these portraits...I see a certain sadness and a sense of loss but also see an enormous sense of pride in their supreme sacrifice,” he said.

“These brave men never lived to see their Irish Republic,” he added. But he pointed out that they were, as Oglaigh na hEireann, the founding fathers of our Irish Army.

Commdt Donie McGrath, who formally launched the exhibition, thanked the Patriot Portrait committee for “the wonderful job you have done in restoring these paintings”. “It is a fantastic job and has really brought them back to life,”

He paid tribute also to the artistic ability of Jack Donovan, describing him as a Limerick man with a passionate interest in art and history and a non-conformist.

He also acknowledged the role played by Capt Madden and his fellow officers in commissioning the painting. “These portraits will remain for perpetuity in Thomond Hall,” he said. And he expressed the hope that the “future will continue in the same spirit of selflessness and patriotism” as demonstrated by the men portrayed.

Two young local singers gave renditions of songs associated with Easter 1916: Sarah O’Mahony sang James Connolly while Catelyn O’Keeffe, sang Grace. A series of essays on all the men in the portraits has been published by the organising committee and is on sale locally for just €5.