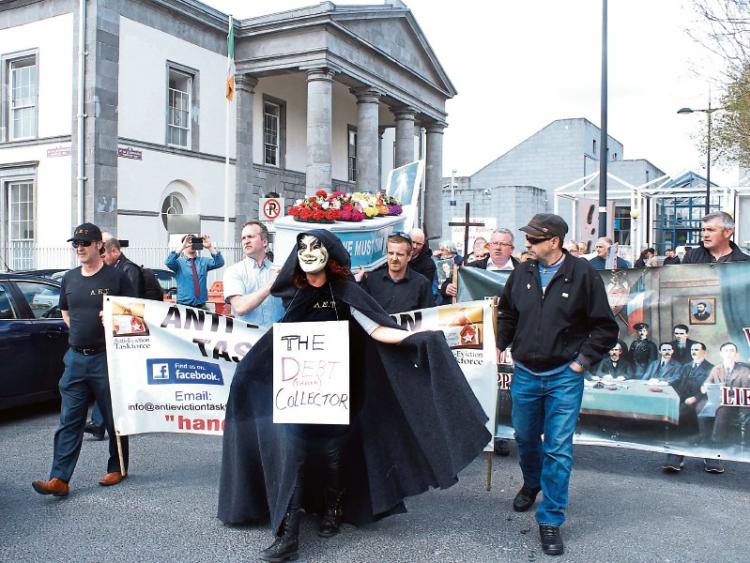 There were angry scenes at Limerick Courthouse [Picture: Michael Cowhey]

THERE were dramatic and chaotic scenes at Limerick Courthouse and on the city streets this Friday afternoon, when more than 100 civilians forced the adjournment of Limerick repossessions court.

In the second half of repossession hearings, shortly after 12pm, at the Limerick Circuit Court, County Registrar Pat Wallace was jeered out of the courtroom when an individual started an hour-long scene of heckling and boisterous protests.

Following protests at the courthouse, a procession took place by lobby groups from Merchant’s Quay and down O’Connell Street, where they attempted to enter a number of banks, including Bank of Ireland, AIB and Ulster Bank.

“May I ask the County Registrar a question?” to which he replied, “No you may not”. The man continued: “Have you taken an oath to uphold the constitution of this country?” This was followed by an abundance of cheers by those who attended.

A number of anti-eviction lobby groups attended in-court protest, including the Anti-Eviction Taskforce, who engaged with the defendants on the day. There were 169 cases to be heard on the day.

Another man approached the registrar, and was asked to leave the courtroom. When gardaí attempted to escort him out of the room, he resisted and momentarily wrestled with two members of the gardaí.

When the man was taken out of the courthouse, those participating in the protesting stood around the solicitors and the gardaí, shouting “This is an absolute disgrace”, with a number of people chanting “This is a kangaroo court”.

“You are criminals, and you are all working for the Government,” one individual shouted to the top of the room.

As Mr Wallace left, people chanted and stamped their feet harmoniously, as another couple of gardaí arrived at the scene. Gardaí approached a number of individuals who decided to record the incident, via their mobile phones.

While gardaí conversed with those in the courthouse, and asked people to put away their mobile phones and video cameras, background voices cheered “This is a civil court, and we are entitled to speak”.

“Every year, as a result of losing their homes, people are taking their lives and jumping into the rivers,” a number of people echoed.

A number of solicitors, both representing the banks and defendants, were also forced to leave the room, as a chorus of people cheered “Out, out, out”.

Witnesses have told the Limerick Leader that the lobbyists followed the solicitors to their vehicles, before they departed.

One solicitor told the media, “This protest has gone way too far, I think, and it’s just intimidation and harassing the court,” he said.

One garda was surrounded by a dozen people, who continued to take a video of the scenes with their phones. She said: “I have the right to my privacy, and recording in the courthouse is illegal.”

“It is not illegal,” one person quickly responded.

“It is. If you breach the peace, you will be arrested. If you surrounded any other garda like this, you would be arrested,” she responded.

A theatrical display took place during the protests, when a woman - who did not wish to identify herself to the press - performed a soliloquy in the courthouse. She wore a cape and a Phantom of the Opera-esque mask, and received tremendous applause from the audience.

“I am a human being who cannot deal with the debt of this country,” she melodiously roared, which was reciprocated with cheers.

A garda approached her from behind and said quietly: “Can you please, just, be quiet.”

Twenty minutes before Mr Wallace returned to the courthouse, a number of protesters took over the jury box. A man stood up and walked towards the registrar’s seat:

“Because the County Registrar has left the building, we hereby appoint 12 jurors and we have appointed a judge who will now charge the banks with fraud and corruption.”

A man then sat in the judge’s seat and shouted “All rise”, and three gardaí darted towards him to remove him from the courthouse.

At 1.10pm, Mr Wallace returned to the courthouse, following a large number of gardaí entering the scene to calm the protest. Before he sat down, the protesters taunted him, which which was followed by a choral singing of the national anthem.

Gardaí shouted: “Silence the court”. Mr Wallace left the room as the final lines of Amhrán na bhFiann were sung.

After the courthouse was cleared, a procession began, which included the theatrical woman leading a parade from Merchant’s Quay, with a number of protesters carrying a coffin.

As they made their way through a single traffic lane on O’Connell Street, they attempted to enter Bank of Ireland, where - according to a witness - they “frightened a number of children who were inside the bank, crying”.

Before they could access Ulster Bank, members of the gardaí helped close the front doors to Ulster Bank, where the lobbyists stood outside, chanting.

Local man, Greg Doran said: “This needed to be done. What the banks are doing is an absolute disgrace.”