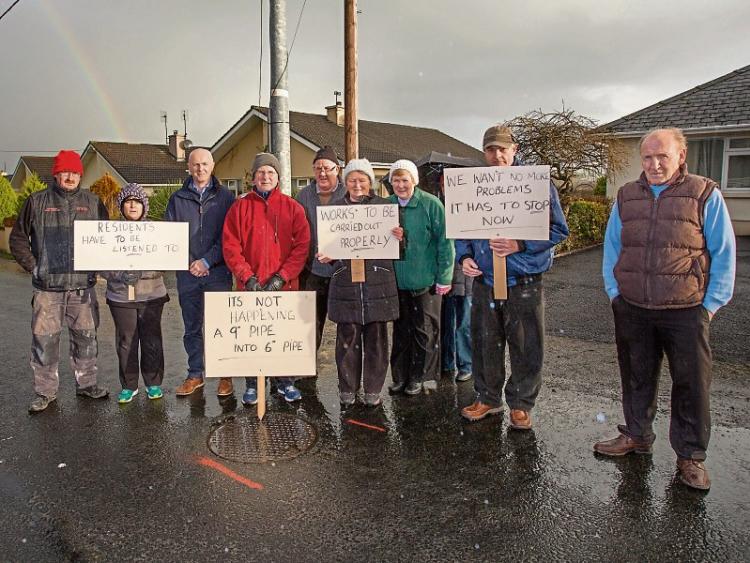 A LONG-RUNNING row over a ghost estate in Abbeyfeale could blow up again unless the local authority is prepared to reach a compromise.

Residents on the Clash Road this week warned they would be protesting again against plans lodged by Limerick City and County Council to build a long footpath along the road to the Cois na Feile estate where 12 of the houses have now been refurbished by the Clúid Housing Association.

Otherwise, he said, there would be a pedestrian crossing “in the middle of the country” where the footpath would stop and he believes this would be a health and safety hazard.

However, he believes it is funding alone that is preventing the residents’ option from being implemented.

The residents have met council officials on the issue and have also lobbied local councillors. And there was an expectation that their concerns would be aired at a meeting of local councillors in Newcastle West this Wednesday.

However, when the item on Cois na Feile was reached on the agenda, there was no indication from any councillor or official that residents had any problem with the council’s plans for a footpath.

“I am disappointed with the councillors and the engineer who was out with us that it wasn’t even raised,” Mr Hartnett said after the meeting. “We have to get together on this. Objections will have to go in straightaway.”

But he warned that there could be trouble and further protests.

Because the planning application for the path comes from the council, it is known as a Part 8 and must be formally agreed by councillors before it can proceed.

However, submissions can be made by the public up to June 27, senior executive engineer Roger Noonan told the meeting.

Cllr Liam Galvin asked about the timeline for the footpath. “The houses are to be given out this week,” he said. “When do we expect the footpath project to be completed?” He had concerns, he said, that people could be living in the refurbished houses for anything up to six months but without a footpath.

Mr Noonan suggested that it could be mid-July before a decision could be made after which, assuming all was agreed, it had to go to tender. It could be September or October before the work could be finished, he said.

Director of services, Gordon Daly said a special meeting of the council would have to be called for July to facilitate the project.

Last year, the Clash Road Residents Association was formed when plans moved ahead to rehabilitate 12 houses on the former private estate of Cois na Feile. At the time, the residents argued that there was more than enough social housing on the road and asked for a study to be done on the issue. They also argued that there were already problems with sewerage on the road and were concerned about putting in a footpath along a narrow road that already carried a lot of traffic.

According to Mr Hartnett, they have been assured that the problem with sewerage is now resolved.