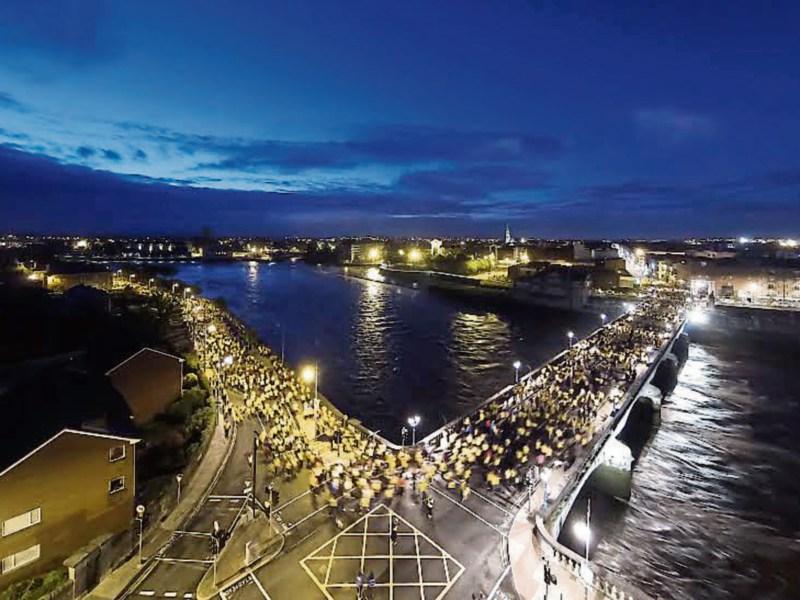 LIMERICK’S three Darkness into Light walks this weekend are on course to be the most popular ever staged.

With just days to go to the Pieta House fundraiser, organisers have confirmed that more than 2,000 people have registered to do the walks in Limerick city, Kilmallock and Newcastle West.

That number is expected to rise between now and Saturday morning at 4.15am, when the walks begin.

The seventh time the Darkness into Light walk has taken place in Limerick, suicide prevention charity Pieta House has called on people to register in advance, either online, by phone, or in the former 7Camicie shop at Patrick Street to be sure of a T-shirt and a place on the walk.

The walk is a unique early morning experience, which begins in darkness as thousands of people walk or run a five kilometre route while dawn is breaking.

Last year’s event attracted 100,000 participants in over 80 locations across Ireland and abroad.

Here in Limerick, some 7,000 people donned yellow T-shirts and took part in the circular route, which started at Thomond Park and took in much of the northside.

In addition to this, 2,000 people completed an online survey comprised of a series of questionnaires both before and after taking part in Darkness Into Light.

The research, conducted by the University of Limerick in conjunction with Pieta House, showed a significant increase in levels of well-being after taking part in Darkness into Light, in particular for those who had lost someone to suicide.

The research also showed the important role of connecting with others to overcome suicidal ideation.

“Darkness into Light is a truly unique event and this research proves what we have been seeing every May since 2009. It’s much more than a fundraiser but an opportunity to reflect and to come together in solidarity with your community,” said Joan Freeman, founder of Pieta House. “I’m encouraging people to join the thousands in Ireland and across the world and walk from the darkness into the light.”

Pieta House, which marks its tenth anniversary this year, has helped more than 20,000 people through its nine centres in Ireland. This includes its support centre at Mungret.

Such is the importance of Limerick to the Pieta House fundraiser, Ms Freeman always visits the launch of the Darkness into Light event in the city each year.

Last year’s event in Limerick raised €160,000 for the charity, money which will remain locally.

Although Darkness into Light will now take place in four continents across the world on different time zones, Ms Freeman has previously said she does not think the event would have been so successful were it not for the effort here in Limerick.

“I genuinely love Limerick,” she said. “There is a courage about the people of Limerick. Remember they were the first county outside Dublin not only to host a Darkness into Light event, but also to bring a service to their community. They did it for the love of their own people, their own community. They have this courage, they have a resilience. One thing which strikes me is they are not afraid to admit there are problems. Limerick embraces everything that is given to it.”

For more information, and to register for Darkness into Light, please telephone 061-484448, or visit dil.pieta.ie on the internet.

Pieta House volunteers will also be in the Crescent Shopping Centre registering participants on Thursday and Friday betwen 10am and 4pm.

And people wishing to register can also visit the former 7Camicie store in Patrick Street between 10am and 6pm Thursday and Friday.

The city walk kicks off at Thomond Park at 4.15am on Saturday morning, with the walk in Kilmallock starting at Coláiste Iósaef.

The walk in Newcastle West commences at the town’s community centre.