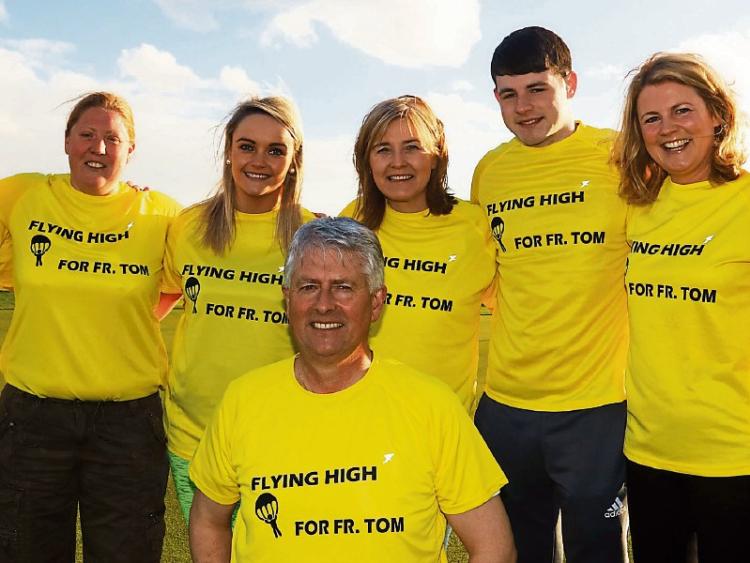 CATHOLICS usually look to the heavens for divine inspiration but one County Limerick priest is going to descend from them.

Fr Tom Mangan is one of 12 disciples who are going to take a leap of faith by doing a skydive to raise funds for a new parochial house in the parish of Donoughmore/Knockea.

Fresh from taking part in Ballyneety’s Strictly Come Dancing, he is now going to fall from over 10,000 feet high.

Fr Mangan has vowed not to bring his anointing oil to Abbeyshrule, Co Longford on May 22.

The priest from Ardagh joked: “I’ve gone from dancing to skydiving!

“They said to me they were going to do a skydive to raise money so I said I might as well join them and lead by example. They are marvellous people. I will be going up on the plane anyway! I will have a cut at it,” said Fr Mangan.

The priest, aged in his fifties, will accelerate from 0 to 100 miles per hour in five seconds after jumping out of the plane. After free falling for 25 seconds the parachute will open at 5,000 feet and he will glide safely to the ground - as they surely will with God on his side.

“I hope so,” smiled Fr Mangan.

The idea is a direct follow-on from the success of a Strictly Come Dancing event for projects at Ballyneety Golf Club.

Brid Lang said the group met at several get togethers and she mentioned that next on her “bucket list” was a skydive.

“Miriam Gallagher said she would love to do it too so we put it to the group and 12 brave souls replied saying ‘yeah, let’s do it’,” said Brid, who found herself “parachuted” into the role as organiser.

Fr Mangan is only in the parish a year and a half but has proved so popular that they decided to raise money to build him a badly-needed new home. Fr Mangan says the parochial house, built in 1904, is in terrible condition.

“It is full of wet rot and dry rot, there is no insulation basically. It is a protected structure so we have to go down the road of delisting it so hopefully we can get that done.

“The plan is to build a new house on the same site and use some of the materials from the parochial house like the old stonework. There is a nice coach house that we are keeping,” said Fr Mangan. It is estimated the new house and furnishings will cost in the region of €350,000.

Brid said it is strange that while they have a parish priest and a parochial house, Fr Mangan cannot live in the parish.

“To some this was unacceptable and a bit unfair to both Fr Mangan and the parish. We would like to see Fr Mangan living in the parish as soon as possible.

“When Fr Mangan ‘volunteered’ to do the skydive a few of us thought – ‘great, we have God on our side for good weather and we will all land safely!’,” said Brid.

Sponsorship cards to support the adventurous men and women with a head for heights are available in the local shops, pubs and golf club.