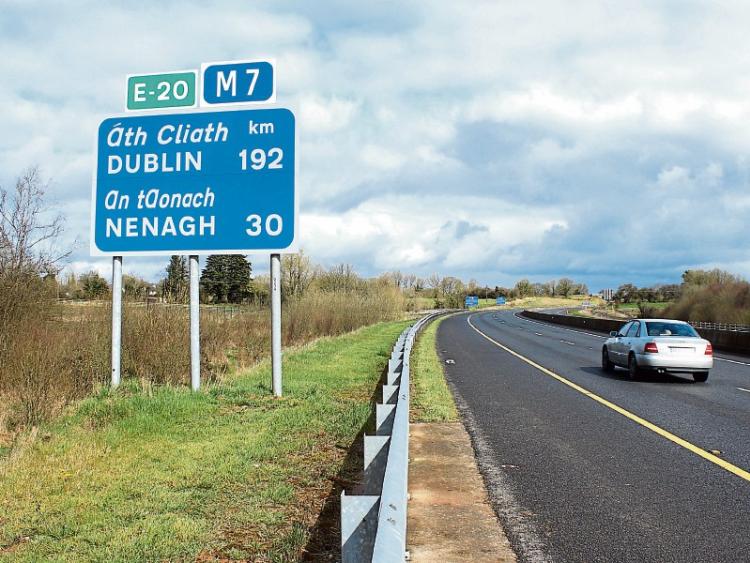 Concerns have been expressed over cars aquaplaning on the M7 [Picture: Michael Cowhey]

A LIMERICK law firm has taken up the case of a young man who lost control of his car on the M7 — allegedly due to aquaplaning.

Last month, a Tipperary councillor called on the NRA to carry out a safety audit on the motorway between Birdhill and Limerick over fears of aquaplaning.

The motorist, who is being represented by Keating Connolly Sellors of Limerick city, was travelling on that stretch of road on November 13, 2015, when water allegedly caused his car to aquaplane, lose control and skid into the crash barrier.

In total, five cars were involved in five separate incidents in the space of 30 minutes on one mile of motorway, they say.

Ronan Hynes, of Keating Connolly Sellers, said it is evident that there is a dangerous problem with this part of the M7.

“There have been numerous reported incidents at this spot and ultimately it is the driver’s insurance company that is liable for the associated costs,” said Mr Hynes.

While currently representing one motorist, the solicitor confirmed they are in communication with a number of others who were involved in accidents on the M7.

“There are a number of potential defendants. It is obviously a blackspot and something needs to be done about it. First and foremost it is clearly a public safety issue, setting aside the legal rights of these individual drivers .

“It happens too frequently. Obviously we do get bad weather and accidents happen but it has happened too often at this one location,” said Mr Hynes.

Aquaplaning occurs when a layer of water builds between the tyres and the road surface, leading to a loss of traction that prevents the vehicle from responding to control inputs.

Cllr Hughie McGrath, who raised the matter at a Tipperary County Council meeting, said he has received an increasing number of reports in recent months from worried drivers.

Several professional drivers — including lorry drivers and full time company representatives — have approached him concerned about water lodging, sitting on the road and causing aquaplaning.

“They would be used to driving on roads up and down the country. The water seems to sit too long, it doesn’t drain away. At night-time you can actually see the film of water sitting on the road with your headlights.

“I raised it at a council meeting and called on the NRA to carry out some sort of safety audit or skid resistance on it,” said Cllr McGrath.

According to the NRA, this section of roadway has been reviewed and no fault was found from an engineering viewpoint. However, one school of thought is that the topography of the area is resulting in the prevailing winds blowing the water back onto the road during heavy storms.

Mr Hynes said a further investigation into the safety of this segment of roadway is urgently needed before another driver has a serious accident.

“Too many lives have been lost or individuals seriously injured because of dangerous black spots on our roads. The NRA urgently need to carry out a survey of the road and surrounding area to establish what is causing the water logging,” he concluded.