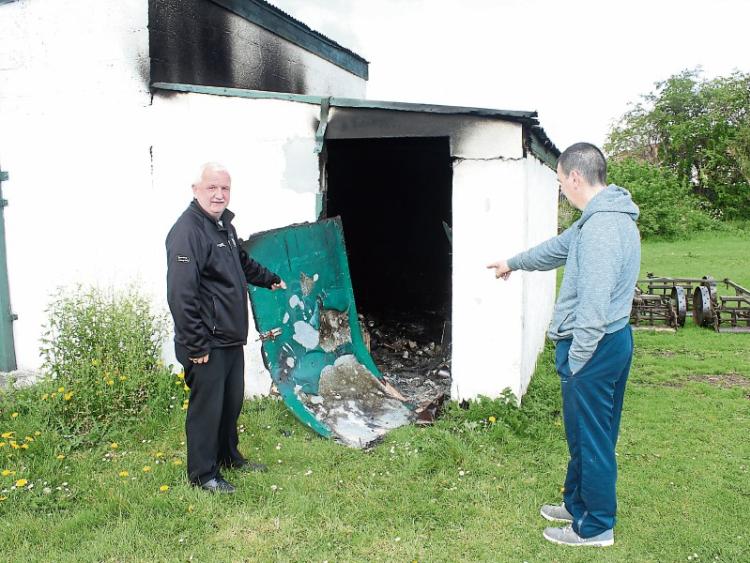 'Stressed and worried': Eamonn Phelan and Kenneth Dawson observe the damage caused by a fire that was allegedly started by a gang of youths, during the May Bank Holiday weekend Picture: Michael Cowhey

A GANG of teenagers has caused destruction on the grounds of a city GAA pitch over the past three weeks, putting a major dent in the club’s efforts to raise “much-needed” funds.

On Monday morning, St Patrick’s GAA club officials discovered that their 50-year-old storage shed in Rhebogue, which contained a large clothes collection for charity, had been set on fire — allegedly by a group of youths.

Club PRO Eamonn Phelan told the Limerick Leader the problem was compounded by a €1,100 bill from the Limerick Fire and Rescue Service, in response to the youths setting numerous trees on fire.

The club has highlighted these incidents through social media, and have appealed to the local community to help stop any further vandalism in the future.

The incidents, according to Mr Phelan, have left club members “stressed and worried” about  the “new breed” of night time anti-social behaviour that has occurred on the grounds in recent weeks. He said that he fears the vandalism will continue.

“It all started happening around three weeks ago, and young people were coming off the canal bank side, along Plassey walk. Gangs were coming in over the boundary wall having parties.

“We repaired the wall, and built it up again. We thought that might prevent them, and then when we went down this morning [Monday], we discovered that they burnt the storage shed we had there,” Mr Phelan explained.

He said that there is also a safety issue for children and club players, as shards of glass have been scattered across the grounds over the past three weeks.

He added that the clothes collection was part of their next fundraising initiative, and it was hoped that funds would go towards purchasing more equipment for the youth teams.

“This is a big loss for us, as fundraising is very difficult to do. It’s very difficult for the club to do this. And it’s unfortunate that we have to go and waste our money on this situation, instead of putting it into the kids to buy hurleys, helmets, sliotars and jerseys. That is where we will lose out in the end. As well, we have to maintain the grounds, too,” he said.

At 2.34pm, on Monday, the club shared photos of the shed that was ungulfed in flames, just five days after they shared images of the trees that were set on fire, close to the pitch.

In the Facebook post, headlined “We were hit again”, the club stated that the damaged shed was built single-handedly by the late Brendan Tobin, who was St Patrick’s vice-president and served the club for 80 years.

“Again can anyone help us with this latest vandalism,” the Facebook status ended.