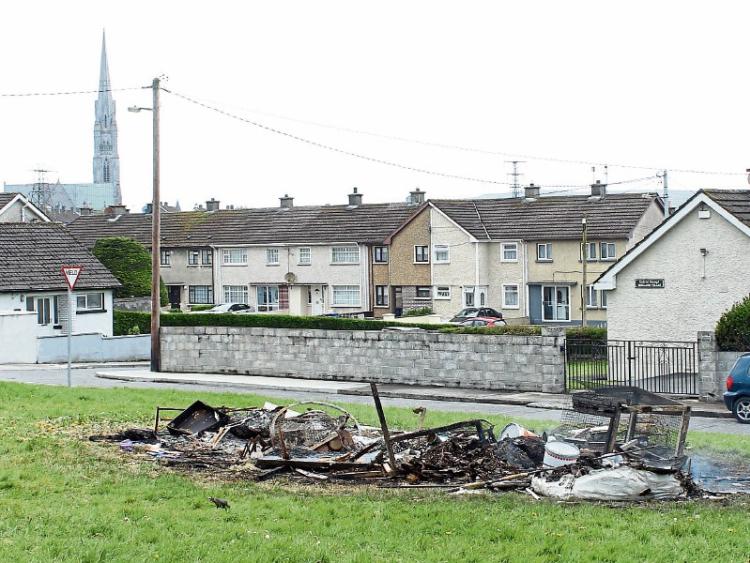 Firefighters were attacked while attending this bonfire in Garryowen

THE “little thugs” who attacked firefighters tackling a city bonfire should be “named and shamed” and made pay for any damage caused.

That’s according to former detective garda Cllr Sean Lynch, who described the incident as “an all time low”.

Firefighters responding to what was described as “a routine bonfire” on Sunday night at Garryowen green were set upon by a gang of around 15 youths, some as young as 13.

They attacked the emergency service personnel with planks of wood, a shovel and rocks.

One firefighter was struck over the head with a pool cue, while a large rock was hurled through the front windscreen of the fire appliance.

The youngsters continually goaded the workers, despite their attempts to put out the blaze.

It followed a weekend where the fire service was called out at least thirty times to tackle May eve bonfires, many at derelict houses on the southside.

But Sunday night’s incident has sparked widespread condemnation, with Cllr Daniel Butler taking to Twitter to describe it as “a disgrace” and “an insult” to the workers who “protect our community bravely”.

Mayor Liam Galvin added: “It’s not acceptable. Who do these people think they are?”

Cllr Lynch said: “There should be an all-out effort made to identify the culprits, bring them to court and hit them where it hurts – in their pocket. A firefighters’ job is difficult enough, without them having to look over their shoulder worrying if some thug is going to do something to them.”

In terms of the May eve bonfires, he believes the council should act to limit them to two or three, and restrict what can be burnt.

A number of fires were understood to have been started by youths in the Childers Road, the Hyde Road and Clarina Avenue.

Limerick FC fans also witnessed thick black smoke rising in the air behind the Market’s Field during the game against Waterford United.

Gardai and the ambulance services were called to Sunday night’s attack, with a number of the firefighters suffering minor injuries.

Henry Street gardai are investigating the incident, and can be contacted at 061-212400.