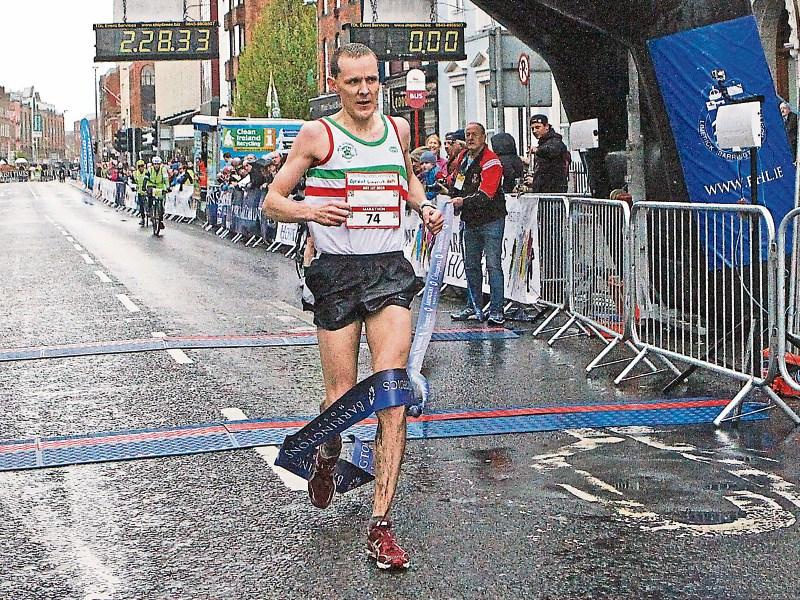 Martin Doody from Caherdavin, who won the full marathon

THOUSANDS of people have taken part in the seventh annual Great Limerick Run.

The city’s main thoroughfare, O’Connell Street, was closed off from early on Sunday, as up to 13,000 runners of varying abilities took part in the Barringtons Hospital sponsored event.

Early rain gave way to mild, warm weather, with the sunshine occasionally popping through the clouds.

And the sun was shining on 40-year-old Martin Doody from Caherdavin, who won the full marathon, which kicked off at 9am. He is pictured above crossing the line in just under two hours, 28 minutes and 33 seconds.

The first Limerick man to win the full marathon in its short history, Martin said: “I’m delighted. An Irish runner like me might get to win one marathon in his life. To win in my home town is just fantastic. The weather was nice and cool, so no-one noticed the heat was there. I've been training since January, running anywhere between 60 and 100 miles each week.”

The first woman to complete the marathon was Dublin's Ciara Hickey, who crossed the white line in two hours and 46 minutes.

And the first Limerick lady to complete the race was Lizzie Buggy, from Adare.

The first athletes from the 13km half-marathon began to pass the finish line just after 1pm, with those completing the six-mile race beginning to arrive just after 2pm.

This race was won by Kenyan national Peter Somba, 23, who beat his previous six-mile best by two minutes, recording a time of just 29 minutes.

He was followed by runners supporting various Limerick charities, including the Sophie’s Journey foundation and the Corbett Suicide Prevention Patrol, and a number of good causes nationally.

The Great Limerick Run was today’s centrepiece of the annual Riverfest festival.

A number of other events will take place, including a spectacular firework display over the Shannon tonight around 10pm.

The festival comes to a close tomorrow, with a family fun day, with Get West hosting a family fun day including kayaking. The firm will also erect Ireland’s tallest mobile climbing wall.

For more information on what's on, visit: www.limerick.ie/riverfest/whatson, and for more pictures, and reaction to the weekend’s events, see Tuesday’s Limerick Chronicle, and the weekend Limerick Leader editions.