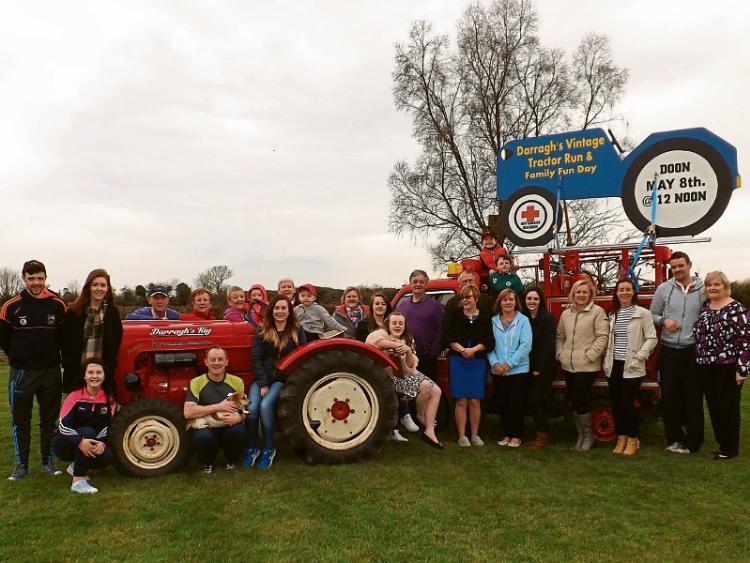 Save the date, May 8: Judging by the attendance at the launch of Darragh’s Tractor Run and family fun day in Doon a bumper crowd is expected

ONE LITTLE boy with a deep love of tractors has inspired a day that brings communities together.

The parents of the late Darragh O’Brien –  Patrice and Donnacha – wish that Darragh’s Tractor Run never existed but the huge crowds and support gave them solace at last year’s inaugural event in Doon.

An incredible €32,000 was raised for First Light — a charity that supports families after the sudden loss of a child.

Darragh, aged just two, passed away from a sudden unexplained death in childhood (SUDC) at home in Doon in November, 2014.

As he loved Tractor Ted and could tell his mum and dad every make and model that went by the house they decided to organise a tractor run in his memory.

Darragh’s Tractor Run and family fun day drew huge crowds and is now an annual event. It takes place on Sunday, May 8 – registration is from 10am at the community and the vintage line-up will head for Hollyford, where Donnacha is from, at noon.

Patrice said there was an overwhelming feeling of support at last year’s event.

“It was just an amazing day, we had to do it again. Everybody really enjoyed it and everyone just said, ‘We will see ye next year’.

Once the vintage tractors – there were over 170 last year  – have left Doon the family fun day commences at the community centre.

There will be bouncy castles, pedal go-karts, zorb soccer, sumo suits, face painting, a beauty corner, bake sale, barbecue, craft fair, music and lots more to see and do. Entry fee is just €5 per child, adults free. There is no registration fee to go on the vintage tractor run, all you need is a model pre-1986. Donation buckets will be available on the day for people who want to watch the spectacle. The local vintage club, Irish Rovers have again offered their expertise in organising runs. Any queries contact Seamus O’Grady on 087 2455156.

“We just want to thank everybody, the whole community for all their help and support. People who we wouldn’t even really know have messaged us to say they want to volunteer,” she said. This year Donnacha and Patrice decided to donate the proceeds to East Limerick Red Cross. They have received a piece of land from the parish to build an ambulance centre.

Patrice said the voluntary members were the first to respond to their son and provide an excellent service.

“John Collins, my neighbour, was here within minutes with the defibrillator,” said Patrice.

Louise O’Sullivan, of First Light, travelled to Doon to thank them and their communities for their generosity and to let them know in person the difference that amount of money would make to the charity.

Now the hope is they can give East Limerick Red Cross a donation that will assist their project.

Balloons with personal messages were released at the cheque presentation. Donnacha and Patrice wrote for Darragh, “Love you forever and always”.

More than 100 balloons floated into the sky and Darragh will be looking down on Sunday, May 8.