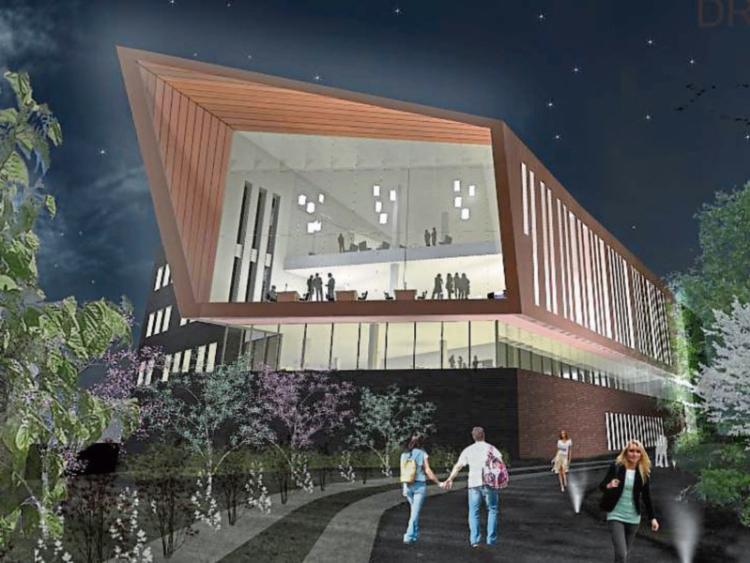 CONSTRUCTION of the €26m second phase of the Glucksman Library in the University of Limerick is now underway.

The new wing, designed by RKD architects in Dublin and constructed by a Kildare company, will encompass some 6,600 m2 and increase the size of the library by two thirds.

The existing library, named after philanthropist Lewis Glucksman, who along with Chuck Feeney has been a major donor to the university, was completed in 1998.

It was designed to house 350,000 volumes and provide 1,100 reader places. It will undergo an additional €4m refurbishment, separate to the works on the extension.

However, since then student numbers have more than doubled, collections have expanded and learning needs have changed.

The second phase of the library will provide a further 900 reader spaces bringing the total number of study spaces available to university students to 2,000.

The new wing will be located in the green space between the library and the main campus road and “will integrate seamlessly with the original building”, according to a University of Limerick spokesperson.

The 18-month long project is scheduled for completion in late 2017.

“As teaching and learning styles change, the doubling of space in the Glucksman Library allows us to accommodate a variety of user needs,” the spokesperson said.

“It will provide spaces which are interactive and collaborative, together with spaces that facilitate quiet, reflective study,” added the spokesperson.

“Following the completion of the phase 2 the library will be an inspirational learning hub infused with technology and will stand as the nexus of UL’s learning community,” they said. The new library wing will “assist UL in realising its goal to provide a world-class knowledge infrastructure to support learning and teaching at the highest levels”.

The new and redeveloped areas in the library will include a grand reading room. quiet and silent study areas, expanded learning commons, a health science library, a law library, and a digital media space.

The library will be the first academic library in the British Isles to have an automated storage retrieval system (ASRS), which will provide enough storage to accommodate the library’s needs for many decades into the future.

The university announced its plans for the library under the €224m Capital Development Plan for 2014 – 2018, which was announced in 2013. Some €100m of that sum was secured loan from the European Investment Bank, Europe’s long-term lender. The development plan is expected to create a total of 1,000 jobs; 290 full-time high value positions and 710 construction-related positions.

The plan included proposals for the construction of 12 new projects including a new clinical research building at University Hospital Limerick and the development of a city centre campus with student residences and an academic building in Limerick city. A number of the proposals are well under way or completed, including the library; the purpose built training centre for the Munster Rugby Team, a second 25m pool, the state-of-the-art flood lit grass training pitches, and the €52m Bernal Building, which forms part of the university’s science zone.