Up to 14,000 set for Great Limerick Run this weekend

Up to 14,000 people will take part on Saturday and Sunday in biggest race yet 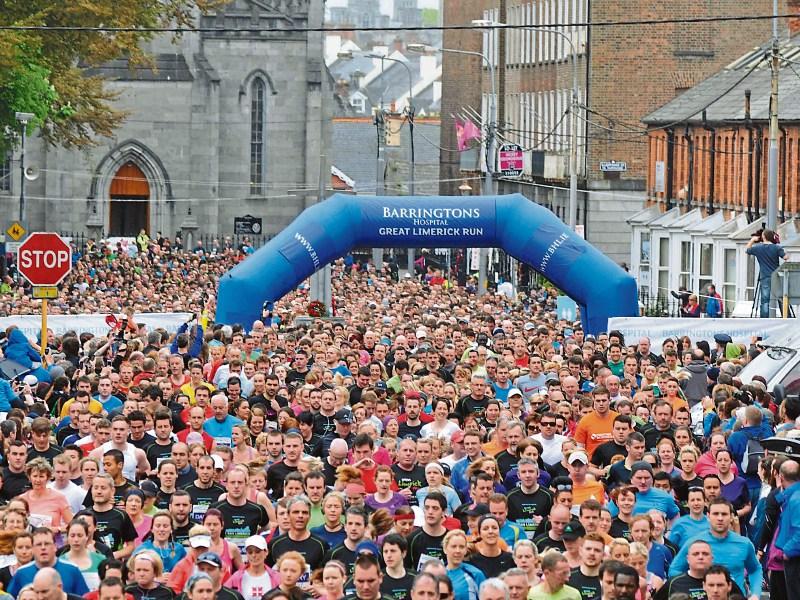 On your marks: Thousands will again line up at the starting line in Pery Square for the series of races on Sunday

UP TO 14,000 people of all ages, athletic abilities and nationalities will pound the pavements this weekend for the seventh annual Barringtons Hospital Great Limerick Run.

Entries closed at midnight on Monday to enter the series of races this Sunday, May 1, during the Bank Holiday weekend.

And on Saturday some 3,300 children will take part in a series of races on the grounds of the University of Limerick.

A team of over 785 volunteers, Gardai and medical personnel will help make this day, as the city shuts down for close to 24 hours.

For many it is now an unmissable event in Limerick’s running and social calendar.

Half marathon runner Gerard Burke, of The Biggest Loser fame, iand who lost a phenomenal 12 stone, is among those who said it is the one weekend he would never leave Limerick due to the phenomenal atmosphere on the streets, as tens of thousands of spectators turn out to support walkers and runners.

“Limerick has a lot to offer, and over the May Bank Holiday weekend, with Riverfest in full swing, we intend to show what the city has to offer to competitors from all 32 counties, and more than 27 countries throughout the world,” race director John Cleary told the Limerick Leader.

Hundreds of people from around the world will be travelling to Limerick to take part, including a large contingent of runners from Chicago, and two former mayors – a father and son – from Santa Cruz in California.

Many will also be running in memory of loved ones who have past, including those who were closest to Gemma Carcaterra, a mother who passed away suddenly five months after the birth of her triplets. The Limerick Gospel Choir, the Lemon Suckers, the Boherbouy Band and a handful of djs have been lined up to entertain the crowds and keep flagging runners motivated along the routes, among 22 musical acts.

The target for 2017 - to have 15,000 entrants – now appears more than achievable, as they have plans to expand the corporate side of the event, as well as luring back the diaspora significantly.

The UL Sport Children’s Run on Saturday, April 30, in the grounds of the University of Limerick, and again in memory of the late Aaron O’Flaherty, has grown from 1,500 children in its inaugural year to 3,300 entrants this year.

Children from17 counties are taking part in these races, over five distances. The event begins at 2:30pm on the track with children in wheelchairs and handheld aids, each achieving their own distance.

Then at 3pm the junior and senior infants will complete 1km. Mums, dads, grannies and granddads complete the course together. Other races start at 3.45pm for first and second class, 4.30pm for third and fourth class, and fifth and sixth class at 5pm.

Due to demand, the Expo will run at the UL Arena for two days, on Friday and Saturday before the run.

It will kick off this Friday from 3-7pm, and again on Saturday from 10am to 6pm. People who have registered will have to attend to collect their race t-shirts, race numbers and goody bags. Their are also over 30 retail stands on display.

The Expo is free for everyone to attend. With over 15,000 visitors expected additional car parking has been arranged at the Old Culture Factory and Unigolf car parks.

“The Barringtons Hospital Great Limerick Run would not be possible without the hundreds of people who make it possible, and put in hours of unseen work, time and commitment for the benefit of the city and the thousands of people walking, running and jogging each of the courses.

“Special thanks must be paid to our sponsors, Barringtons Hospital, the media, especially the Limerick Leader and The Irish Times, for their promotion of this event, An Garda Siochana, volunteers, statutory bodies, and the local people in particular, who line the routes and cheer competitors on to lift their spirits in those final miles,” said Mr Cleary.

The official post event party takes place at McElligotts from 7pm till late.