Dice rolls on Limerick with new Monopoly board 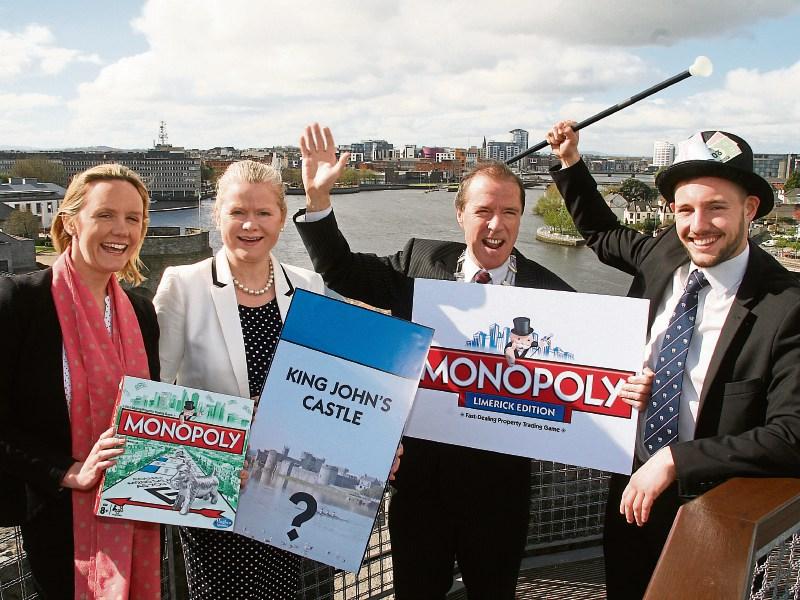 THIS October, Limerick will pass ‘Go’ as city and county landmarks will be “immortalised” on a unique Monopoly board, it was announced this week.

Adjudicators from the Monopoly company held a beauty contest during the year to find the most ideal city and town in Ireland that would be featured on the board.

Launching the initiative on top of King John’s Castle on Tuesday morning, which is set to be the main landmark on the board, games promoter Graham Barnes said that Limerick was selected because of its “tourist magnet” landmarks.

“Even though the Monopoly people adjudicated this, we talked to a number of people on the ground, and the factors that we decided on were the pride in one’s region, natural landmarks, and beauty,” he said.

As the famous London streets are to be replaced by Limerick locations, it is believed that the Limerick Leader and the Limerick Chronicle will be taking over the original Fleet Street position.

“I'm a huge Monopoly fan and I can't wait to see our local landmarks and internationally renowned tourist attractions feature in this special Limerick edition, which will showcase our wonderful city as we enter the closing stages to become European Capital of Culture.

“I have no doubt that it will be incredibly popular and that it will fly off the shelves and be sent all around the world as it will launch just in time for the Christmas market.”

Deputy Mayor, Cllr Gerald Mitchell said that he was “delighted” to be part of the launch, joined by members of Shannon Heritage.

“It is one of those great initiatives that puts Limerick on the international scale.

“I am delighted to be here to launch it this morning, and I think it’s a fantastic initiative. And Monopoly is so renowned, it is well-recognised and has international status,” he enthused.

Shannon Heritage chief executive, John Ruddle welcomed the idea that Limerick would have its own Monopoly board.

“Monopoly is a global brand, and for Limerick to have been chosen to have its own official board is a great boost to the region, and one we are sure will be universally welcomed.”

Games executive, Jake Houghton commended Limerick for its “beauty, vibrancy and great landmarks” which he said will fill the board.

Organisations that wish to be placed on the Limerick board can contact board game makers, Winning Moves UK, at jake.houghton@winningmoves.co.uk, and the deadline is May 31.