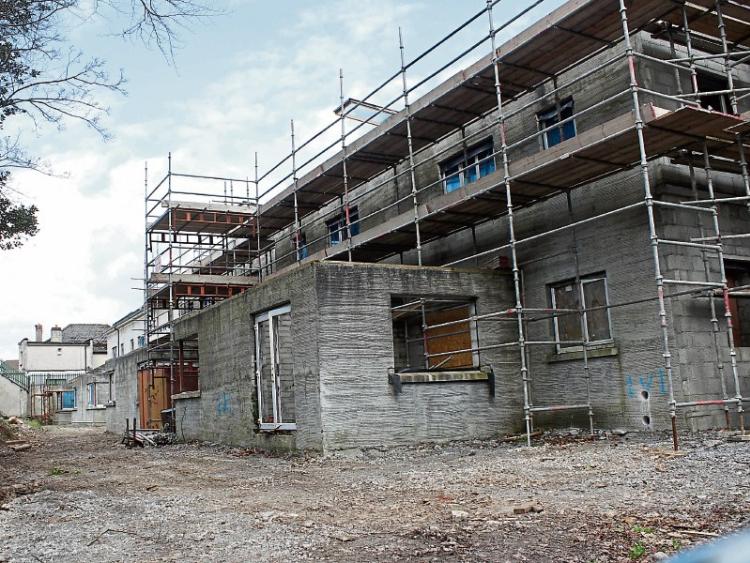 Work has restarted on the Shelbourne Court development, which was stalled for a number of years

COUNCILLORS have expressed disappointment that a development on Limerick's North Circular Road will not go ahead as social housing.

It was revealed at a housing strategic policy committee that the Shelbourne Court development — which an approved housing body had shown an interest in developing with the council — had been bought privately.

After being first marketed as a luxury development, Shelbourne Court became a ghost estate, and Nama had invited expressions of interest in developing the site. The council expressed an interest, but council official Seamus Hanrahan confirmed the local authority had been outflanked by a developer in the private market.

Independent northside councillor John Gilligan said: “It is very unfortunate. There are over 5,000 people on the housing waiting list, and now somebody has bought this, it means there will be ten families still living in appalling conditions. I am disappointed this has happened.”

Speaking at the meeting, he added: “It is the first time we had ever planned social housing at the North Circular Road, and I am sure some people up there would have been disappointed. I don’t think the proposal was welcomed with open arms – and there are some people there who won’t exactly lose a night’s sleep over the fact that we are not having houses down there.”

Cllr Joe Leddin, Labour, added: “Unfortunately, it is just market forces, and we have to accept that. It would have been ideal for elderly-type accommodation. It is not a huge site, but it might have suited people on the list who may be elderly or have a disability of some sort as it is fairly central.”

While the council will seek alternative lands to carry out an equivalent development, the local authority is still planning to build a social housing estate from scratch on lands in Clonmacken, near the North Circular.

Some 40 homes are proposed here, with the project listed as being at a detailed design stage by the council. Between now and 2017, the council has a target of constructing 753 units.

Construction is under way on the second phase of flats in Cliona Park, Moyross, a development which will see ten units.

And an 82-unit development at Lord Edward Street is also well under way, the council reported. Another housing project in Moyross, phase one of Cosgrave Park is at detailed design stage, with 26 units planned here.

Units at design stage include Palm Court in Southill (27 units), the Orchard site in the King’s Island (26 units), and infill housing in St Mary’s Park, which will deliver 20 units.

The revival of the second phase of a ghost estate in Waller’s Well, Roxboro, has  received approval from the Department of the Environment, Community and Local Government, in a plan which will bring 18 units.

Also receiving the green light is a plan for three social housing units in St Joseph Street, and six in Clare Street.