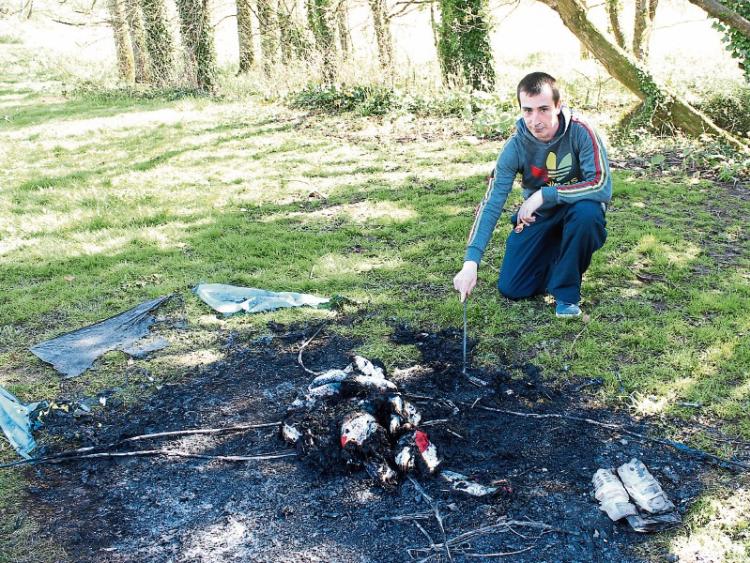 HOMELESS people struggling to find short-term accommodation are sleeping in tents by the Westfields Wetlands, close by one of Limerick city’s most affluent areas, the North Circular Road.

On Tuesday afternoon, Christopher McNamara, 30, spoke to the Limerick Leader about his struggle with homelessness, following his eviction from McGarry House a week ago.

He had been sleeping in a tent, alone, for five days, and was waiting on an appeal to return to the 70-unit facility, which is run by Novas Initiatives on St Alphonsus Street.

He said that he was evicted for “breaching the rules” while staying with his partner.

“This is through my own mistake. Once you are evicted for breaching the rules, it’s hard to get help anywhere else. So, now, I am waiting on an appeal and hoping to get back in. McGarry House is a good hostel, so I really hope to get back in,” Christopher said.

On Tuesday morning, he left to get food at the local soup kitchen, but when he returned, he found that the €60 tent was completely burnt. He said that he could not afford to buy a replacement.

He is not the only homeless person who has resorted to setting up camp by the Wetlands.

On Tuesday afternoon, Christopher was joined by a homeless couple, who did not wish to be named. They told the Limerick Leader that they were also going to set up a tent for the night in the area.

“I got the idea from somebody else, because they told me that they did this and that it wasn’t that bad, once you had a few blankets. But even if I had 100 blankets, it is still bad. It is not a place to be living. Tenting is something you want to do with your family over the weekend — it is not something you live in.

“It was Sunday morning, and there was really bad weather, and I thought the whole thing was going to blow up into the air. That’s how dreadful it was. I woke up this morning, feeling sick, it was so cold,” he explained.

On December 29, 2015, the Limerick Leader published an article about a homeless couple who had spent Christmas Day in a tent in the same area.

This prompted anger on social media, which resulted in a successful campaign to temporarily shelter the two in a B&B.

A spokesperson for Novas Initiatives said that anyone sleeping in the streets “is intolerable. When evictions happen in McGarry House, it’s usually for quite serious behaviour. We support people with very complex needs, including significant addiction issues, mental health issues and challenging behaviour.

“We give people lots of chances, and anybody who is evicted for any reason is entitled to an appeals process. Very often, there would be extenuating circumstances that cause some of these actions, and we are very tolerant of that. We accept that. Once they are listened to, they are very often accepted back into the project, once another bed becomes available they can move back in.”

The spokesperson said that there have been difficulties accommodating homeless people on the waiting list, as every facility is full. Those who are evicted and are successful in their appeal may not immediately secure accommodation due to unavailable space.

From November 1 to April 8, all homeless facilities increased their capacity with four fold-out beds to cater for those during cold and treacherous weather conditions, as part a winter initiative programme. The Novas spokesperson said that it reached full capacity every night during the Easter weekend.

Novas Initiative is working on a Housing First policy, where they intend to support around 20 people over the next year to move into their own accommodation, and to provide “wrap-around” supports within their home, the spokesperson confirmed.