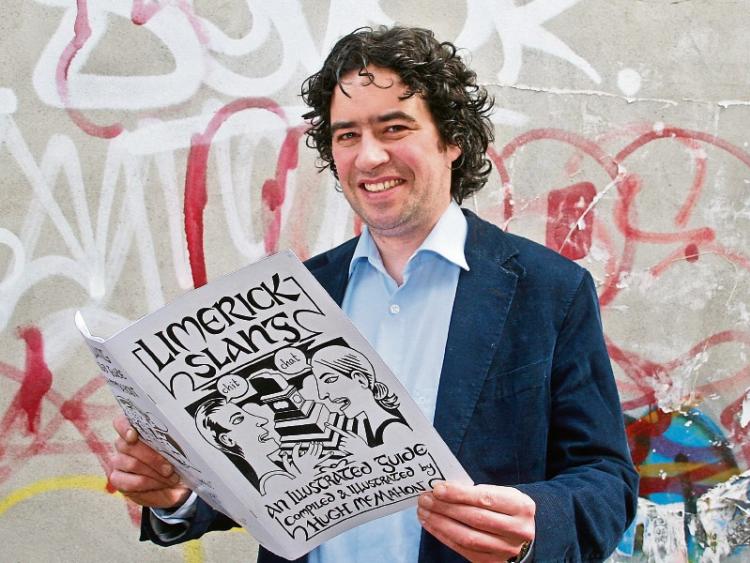 WHEN you get summoned to the editor’s office at 9.15am on a Wednesday – the Leader’s main deadline day — it’s time put your game face on and expect some serious business.

“Sit down for a minute.”

It can’t be too bad if he hasn’t asked me to close out the door.

From his desk he picks up an A4 size booklet and flicks through its pages.

“I was thinking this would make a good Leader 2 cover story. It’s absolutely excellent. He has thought of everything!”

And then he starts to chuckle.

“Ghoulbag. Tackies. He even has ‘Horse that over there’.”

The source of his amusement is Limerick Slang, an illustrated guide to some 227 informal phrases used by Limerick people.

Back at my desk, I open up the comic book for a sconce.

There it is, as Limerick as a feed of Donkey Fords’ chips, a Rubberbandits’ plastic bag, or a Keith Earls try in Thomond Park. And, quite appropriately, it’s the very first phrase in the guide which has been compiled and illustrated by local artist, art therapist and art teacher, Hugh McMahon.

“It took me about a year and a half to put it together,” says Hugh, when I catch up with the author.

“I would have jotted them down over the course of that time. I had seen bits of slang selected in other local books about Limerick interests but I came up with the idea of illustrating them. A lot of them are very suggestive and they kind of create pictures which are in your head. It ties in, I think, with the Irish love of language and the ability to be able to use language in a very descriptive way.”

Most Limerick people will be familiar with many of the slang words in the book, having heard them from older generations.

For most of us, our first introduction to local slang was in secondary school. 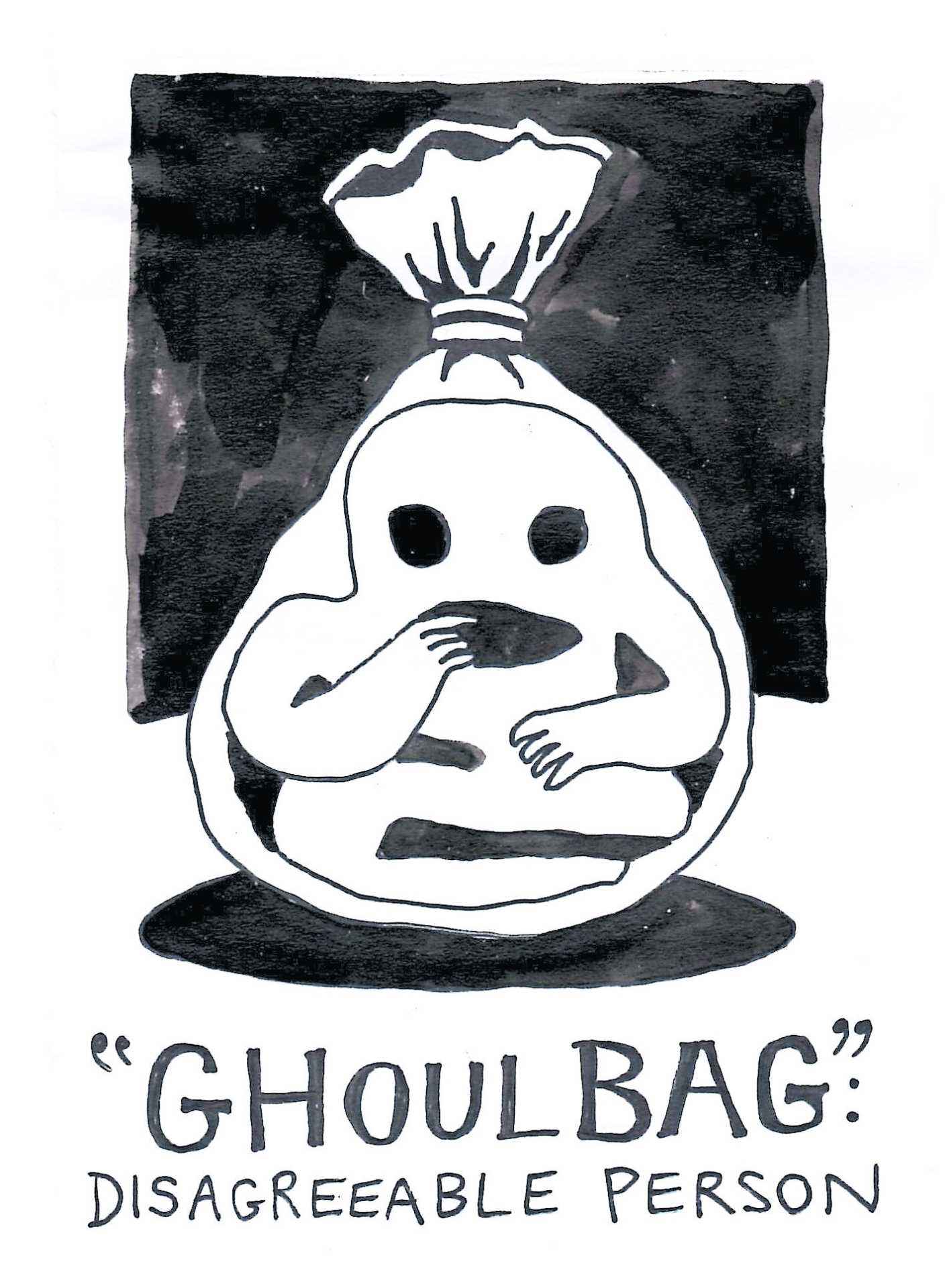 As a country girl (bogtrotter, according to Limerick Slang) going to secondary school in Kilfinane in the 1990s there wasn’t a day that went by without somebody being referred to as “sound” or “sound out” or, the best compliment of all, “pure sound”.  You were forbidden from taking part in PE without your “tackies” and lunchtime for the “shapers” meant getting “the shift” in the GAA carpark down the road when the nuns had turned their backs.

The expressions gathered in Limerick Slang have different origins. Some words are a corruption of Irish words translated into English, a combination known as Hiberno English, for example craic and phoney. Many of the other expressions are idioms: expressions made of ordinary words that have a particular meaning that are not easily understood for example acting the maggot.

Every generation, of course, brings its own references and additions to the slang lexicon.

After the phrase “Aboy de kid”, “C’mere I wancha” is probably the slang term most associated with Limerick city, where a person can be anything from a “daycent skin”, to a “ghoulbag”,  a complete “headwreck” or,  worst of all, “a nutjob”.

Much slang of course refers to social occasions. Those who go out for a “few scoops” and enjoy a “good buzz”, might end up “skulling pints” and invariably are left feeling anywhere from a bit “ropey” or “shook” to  “mangled”, “wrecked” or even “thrown down”.

After all those scoops, there will be the inevitable need to “drain the spuds” (a male’s expression for urinating), and if the said individual is home late or doesn’t come home at all, their partner might just “lose the head", “freak the bean” (have a furious outburst) and have their “guts for garters”.

It is noteworthy that many of the slang expressions in the book are derogatory and insulting. They often mock people who are greedy, foolish, vain or proud.

Somebody trying to play football with a “gammy” leg for instance might be referred to by people on the sideline as “a bit of a God help us”.

While a “gas man” is witty company, you don’t want to be stuck at a “shindig” with “a right daw” or a lad that’s “a bit touched”.

It would be “pure” bad luck to be in rounds with a “snaily” fella who would “peel an orange in his pocket” and is always “playing the poor mouth”.

Humility is an important character trait for Limerick people. People who are “up themselves” or people with “notions” about themselves are ripe for ridicule. These people are prime targets for a bit of “piss taking”.

The slang references to romance and dating range from the old fashioned to the modern. A lad who is “doing a line” with a “fine thing” or a “savage bird” might have “a spring in his step” and then “lose the run of himself” but it would  “soften his cough” if she then “gave him the flick”.

Hugh, who has illustrated several publications and has previously produced a comic book, Limerick Folktales, says Limerick Slang has received “a great reaction from people”. 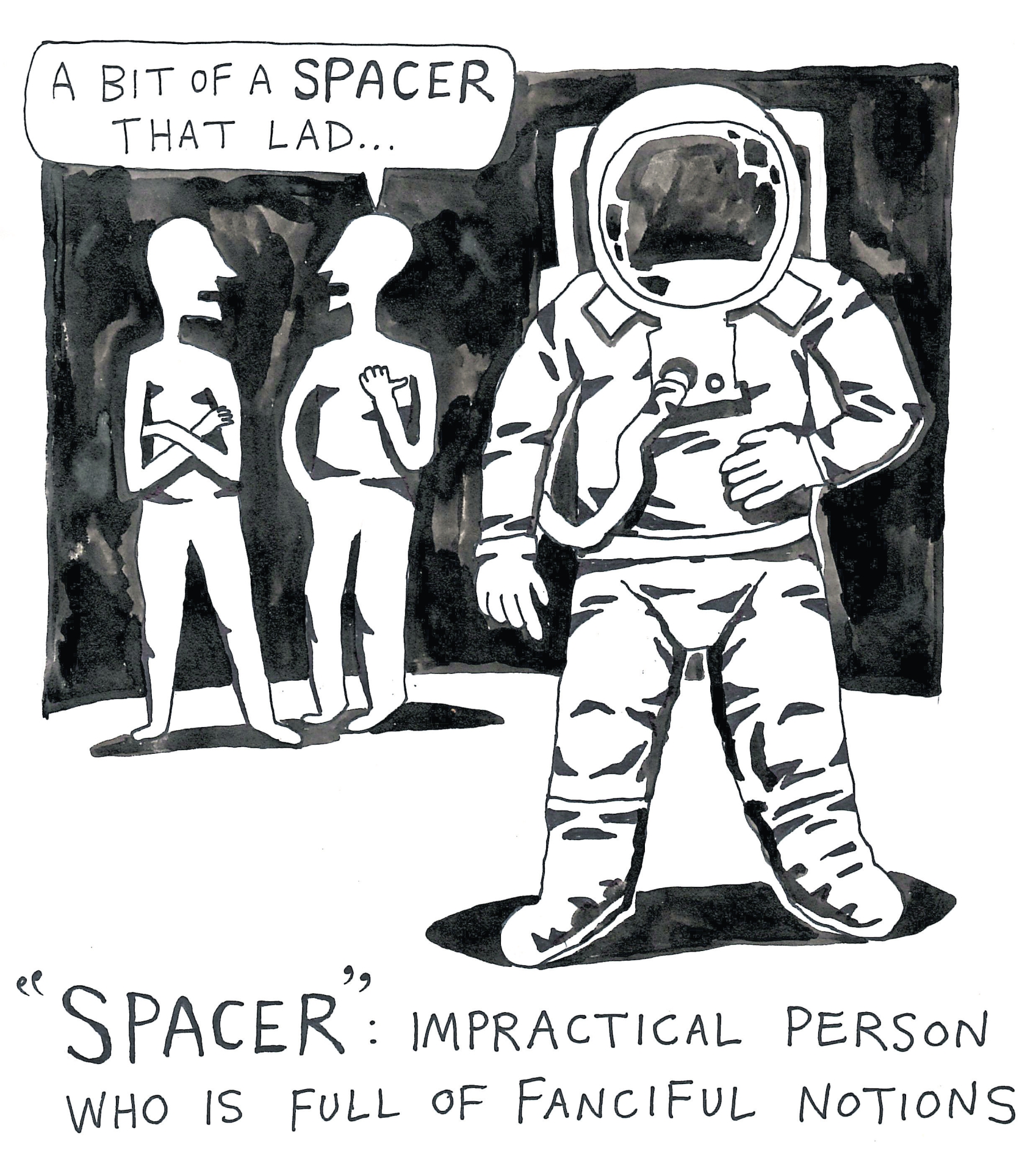 “I could already make a second book with all the phrases people have told me. It’s an aspect of local culture that I think is very noteworthy. I think it is just a way of taking note of something that is used everyday but is a bit overlooked.”

Everybody who has picked up Limerick Slang, he says, haven’t come across at least a few of the phrases.

“ I like that aspect. People have come away from it saying, ‘I never knew that was where that one came from.

“The way teenagers talk now they have references that I wouldn’t ever understand. It’s the whole process of how youth culture works - it reinvents itself every couple of years.

“I work with young kids under 18s and I have been working with under sixes as well and you would be surprised, slang continues on. Like in a family there are phrases that would be very common so there is a bit of resilience to it also.”

So can Hugh pinpoint the origin of a phrase that this reporter has inherited from her family but nobody else seems to have heard of – when a man was so angry that he nearly threw the clothes off himself?”

And his own personal favourite from Limerick slang?

Limerick Slang: An Illustrated Guide will be launched in Shannon Rowing Club, Sarsfield Bridge, Limerick on Friday, May 13 at 8pm. All are welcome.

The publication is available in O’Mahony’s Booksellers, O’Connell Street, Moviedrome, Henry Street and Wild Ireland on Nicholas Street and is priced at €5.