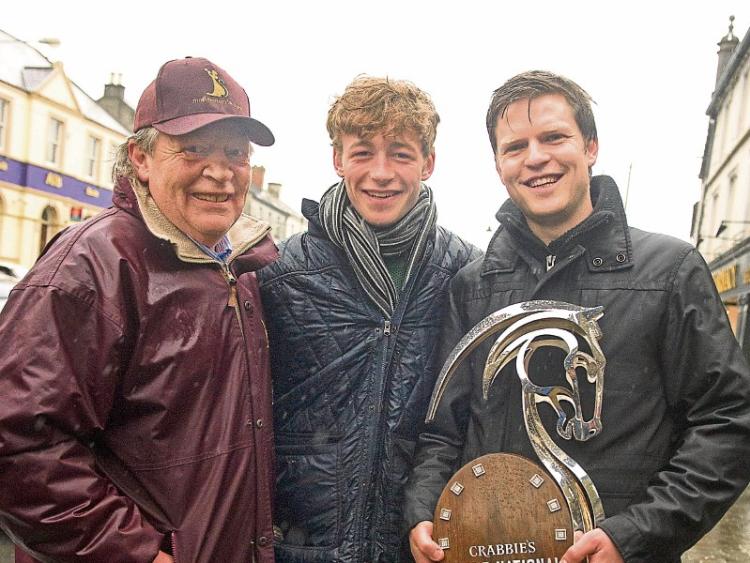 David Mullins, flanked by Mouse Morris and his son Jamie. Below, Tiffer with his friend Munra Borghi

THE FAMILY of the late Tiffer Morris who died in a tragic carbon monoxide poisoning accident, are hoping that the “bittersweet” story of their Aintree Grand National success will alert people to the dangers of the “silent killer” carbon monoxide.

An estimated 600 million people worldwide tuned in on Saturday to see the Mouse Morris-trained Rule the World seal a sensational victory in this year’s Aintree showpiece.

The heartwarming scenes as he crossed the finish line were tinged with sadness as thoughts turned to the one person the Morris family dearly wished was with them, their late son and brother, Tiffer.

“While we are trying to enjoy and celebrate it, it is very hard that he isn’t here with us. It’s kind of bittersweet almost,” said Tiffer’s older brother Jamie this Monday while en route to the home of Rule the World owner, Michael O’Leary, to drop off the winning trophy.

“I know Tiffer is looking down. He would have been so proud to be there.”

Jamie, his father Mouse, mother Shanny, and her husband, Bruree-based trainer Enda Bolger, are hoping that the huge media attention which has surrounded the Aintree win will make people more aware of the dangers of carbon monoxide poisoning and encourage them to buy carbon monoxide alarms.

Christopher ‘Tiffer’ Morris, 30, lost his life while in Argentina, on May 31 last. It is understood that a combination of carbon monoxide, and lack of ventilation in the apartment where he was staying, resulted in the deaths of both Tiffer and his friend, Munra Borghi. 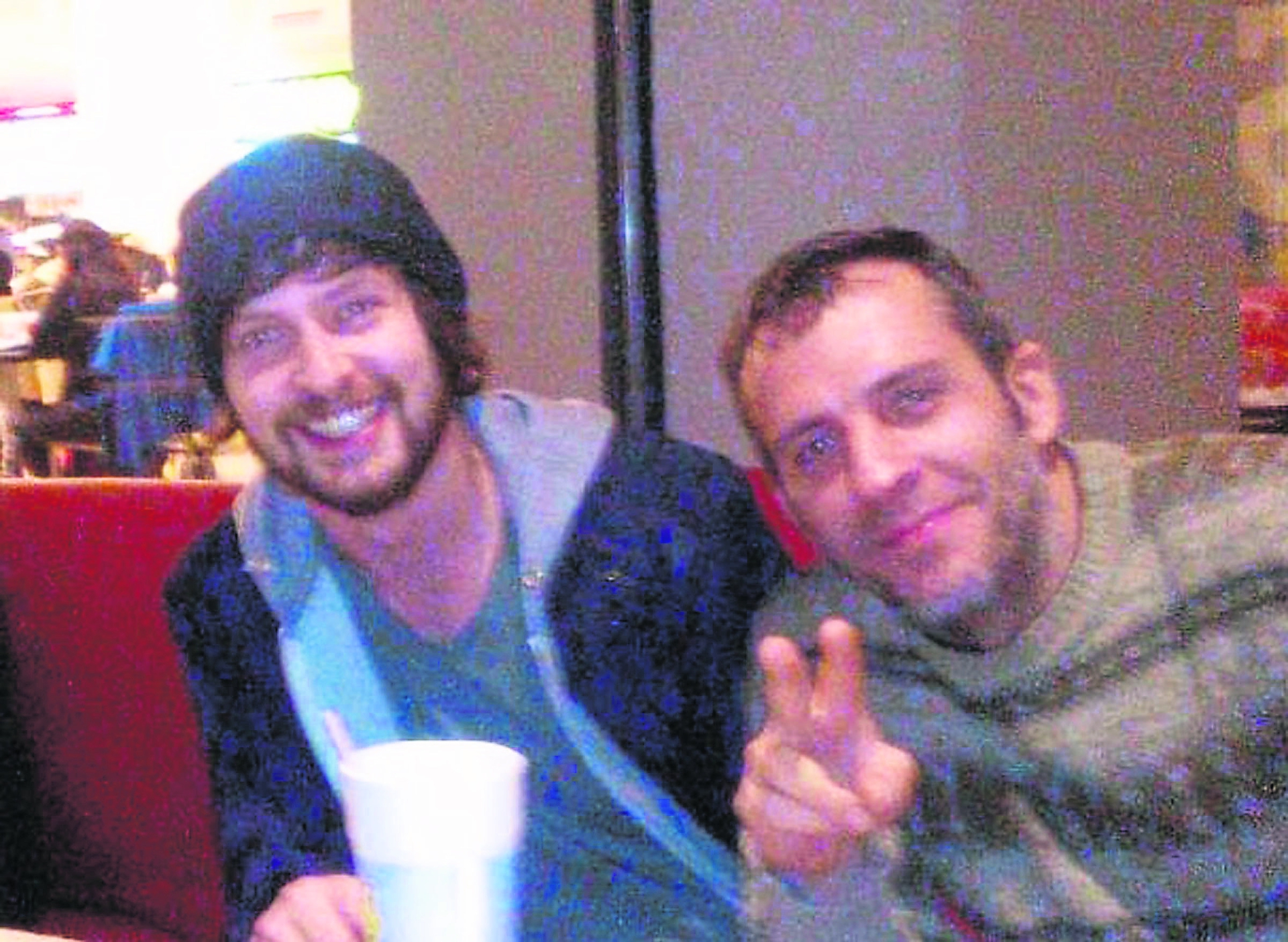 “People have no comprehension how incredibly dangerous carbon monoxide is,” said Shanny this week.

She explained that Munra must have died within seconds of having stepped into the shower.

“Munra's girlfriend had been alone in the apartment the afternoon previous and had been feeling unwell. Her symptoms were nausea and headache. She attended a doctor but it was not realised that this was early signs of carbon monoxide poisoning. Others signs can be feeling like the onset of flu or feeling sleepy.”

Carbon monoxide poisoning is called 'the silent killer' because it has no smell, taste or colour. It is a gas released by the incomplete combustion of fossil fuels such as natural gas, bottled gas, petrol, diesel, oil, paraffin, bio-fuels and even wood or coal on an open fire.

“In 2011 a father and his two children died in their sitting room, resulting from the chimney flu becoming blocked because of a crisp bag that had been thrown onto the fire,” Shanny explained.

According to Jamie, who, along with Tiffer received his secondary school education at Glenstal Abbey in Murroe, “the last year has just been a complete emotional roller coaster.

“It has been very tough all round for the family. Having wins like this helps to pick us up. There is never a minute Tiffer is out of our minds. Sometimes you have to try and put it to the back of your head just to get through your day.

“All you want to do is to think about him and remember the memories but it’s so painful and so incredibly tough, that it’s a struggle to get through the day unless you try to think of other things for a little bit.”

“I think the biggest thing I realised since Tiffer died is that there was also another young man from Glenstal, who was in school the same time as us, Padraig Hughes who died in 2008 from carbon monoxide poisoning leaking from a faulty flue from the boiler room below his bedroom at home. That’s one per cent of Glenstal who died from carbon monoxide poisoning which is unbelievable,” said Jamie.

“The key thing is to push people to get CO alarms, and if travelling, to pack a portable alarm, which we never realised you could get. Tiffer was very organised about what he packed for South America, if he/we knew that portable carbon monoxide detectors were available, he would definitely have packed one.”

Shanny stressed her need to prevent this tragedy happening to any other family, as the pain, nearly a year later, she said, is still too hard to bear.

“There is nothing we can do to bring Tiffer or Munra back, but our need is to stress the importance of installing carbon monoxide detectors in homes and workplaces, particularly in rooms where there are fires, kitchen stoves or gas heaters but also in bedrooms as the poison can travel.

“CO detectors can be bought in most hardware shops for as little as €20. Portable CO detectors are available on-line, and are a must for anyone travelling.

“PhoneWatch Ireland provide 24 hour monitored CO detectors and, to my knowledge, are the only alarm company in Ireland to do so,” she said.

The Morris family have enjoyed a remarkable few weeks with victories in both the Irish National and Saturday’s showcase race at Aintree. Having trained Rogue Angel to victory on Easter Monday at Fairyhouse, an emotional Mouse Morris admitted he had his own guardian angel to thank for Saturday’s success.

“Just after the Irish Grand National, Dad turned to me and said, ‘I was asking your brother for a bit of help today’,” said Jamie, “and just before the English National he said, ‘It would be unfair to ask your brother to work overtime!’.

“As it turns out, my brother is not as lazy as we thought he was,” smiled Jamie.

Jamie is taking part in a charity race for the Kidney Research Foundation at Punchestown on April 30 and he wants to use the occasion to highlight the importance of carbon monoxide detectors.

Meanwhile, there were a lot of happy Limerick punters on Saturday when the JP McManus - owned and Enda Bolger-trained Gilgamboa put in a tremendous display to finish fourth in the National.

The eight-year-old was one of the least experienced horses in the field, having had just nine previous starts over fences. “The horse is in good form, he came out of it well and I’m still on cloud nine,” said Enda.

“He ran a great race and he's something to look forward to for next season. I was chuffed to bits with how he ran and Robbie (Power) gave him a lovely ride. He'll be going to Martinstown for his summer holidays now. He’s going to be a fine horse for the future.”