Migrant crisis in focus at major Limerick based art biennial 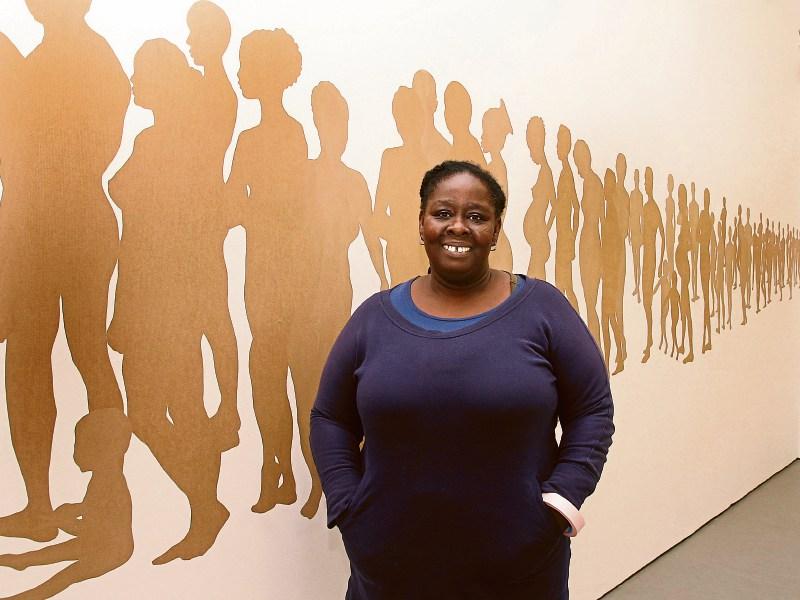 A LARGE collage of individual silhouettes – depicting refugees making a long journey in search of a better life – is among the installations as part of the eminent Eva international art exhibition, which opens in Limerick city this weekend.

Art works from as far afield as Ho Chi Min City in Vietnam, Los Angeles, and Johannesburg have been flown in to Limerick for this week’s launch of Eva 2016, the 37th edition of Ireland's pre-eminent visual art exhibition, which runs for three months.

Regarded as Ireland’s largest and most diverse art exhibition, the biennial this year includes a vast array of works interpreting curator Koyo Kouoh's post-colonial theme entitled Still (the) Barbarians, from a project incorporating Limerick lace by an artist from Ghana, and a large silhouette montage by an artist from Nigeria which aims to focus attention on the current refugee crisis.

This year's @eva_Limerick exhibition was selected from 2,000 entries and will be in 6 locations around the city pic.twitter.com/bGchlRqVAA

Londoner Mary Evans, who was born in Lagos, said this will be her first time exhibiting in Ireland, and connected her own background in migrating with the story of Ireland’s diaspora and the current crisis in the Mediterranean.

“My work nearly always has historical references, and is about historical migration, mainly because I migrated to Europe from west Africa when I was a small child, so that’s my personal starting for work that looks at a global issue, and this [piece] in particular is called Thousands are Sailing, the name of a song by The Pogues.

It begins: “The island it is silent now, but the ghosts still haunt the waves, and the torch lights up a famished man, who fortune could not save.”

“Growing up in north west London, I knew lots of Irish people and that song is very much about Irish migration to America in the 19th century, so that’s the connection that I’ve made between Irish and African history,” she said.

The associate lecturer at Central St Martins in London said she was inspired by an image in a newspaper of people walking for miles on end.

“I’m hoping there will be a real connection [with the audience]. The crisis is so difficult. I can understand of course, why people would want to move and make a better life for their families. I have benefitted from that myself.

“I wish that everybody could be accommodated. It’s just awful when you see these images – it breaks my heart, it’s really sad.

“What I like about it here [in the City Gallery] is what when people walk through here and into the gallery’s cafe that they become part of that work.”

The silhouettes are unclothed images she, said, to highlight people’s vulnerability and include pregnant women, babies and kids, “all manner of humanity, just of people upping sticks.”

Artist Godfried Donkor, from London but born in Ghana, travelled to Limerick last September to work a piece, which has become the Rebel Madonna Lace Collection. 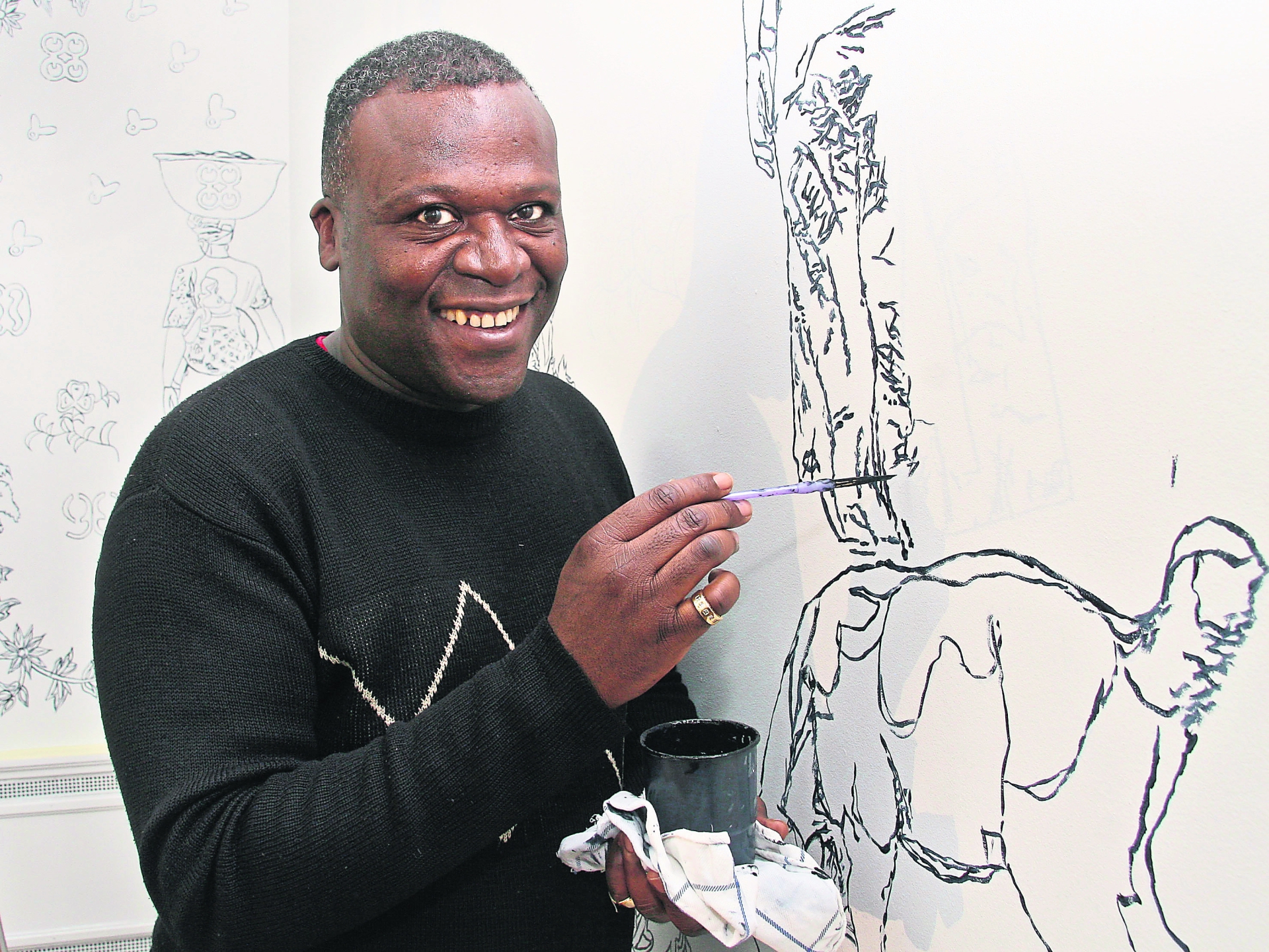 He investigated the history of Limerick lace, and combined that with lace as an aesthetic form in west Africa, and specifically Ghana, where it is considered a luxury product. Some of the motifs are inspired by life in Ghana, and he has also designed a lace jumpsuit, which will hang in the City Gallery. This too is his first time exhibiting in Limerick and Ireland.

“Extraordinary works have travelled across the world from Limerick in the past few weeks and we’re lucky enough to have 30 of the artists here for the opening,” added Woodrow Kernohan, Eva director. 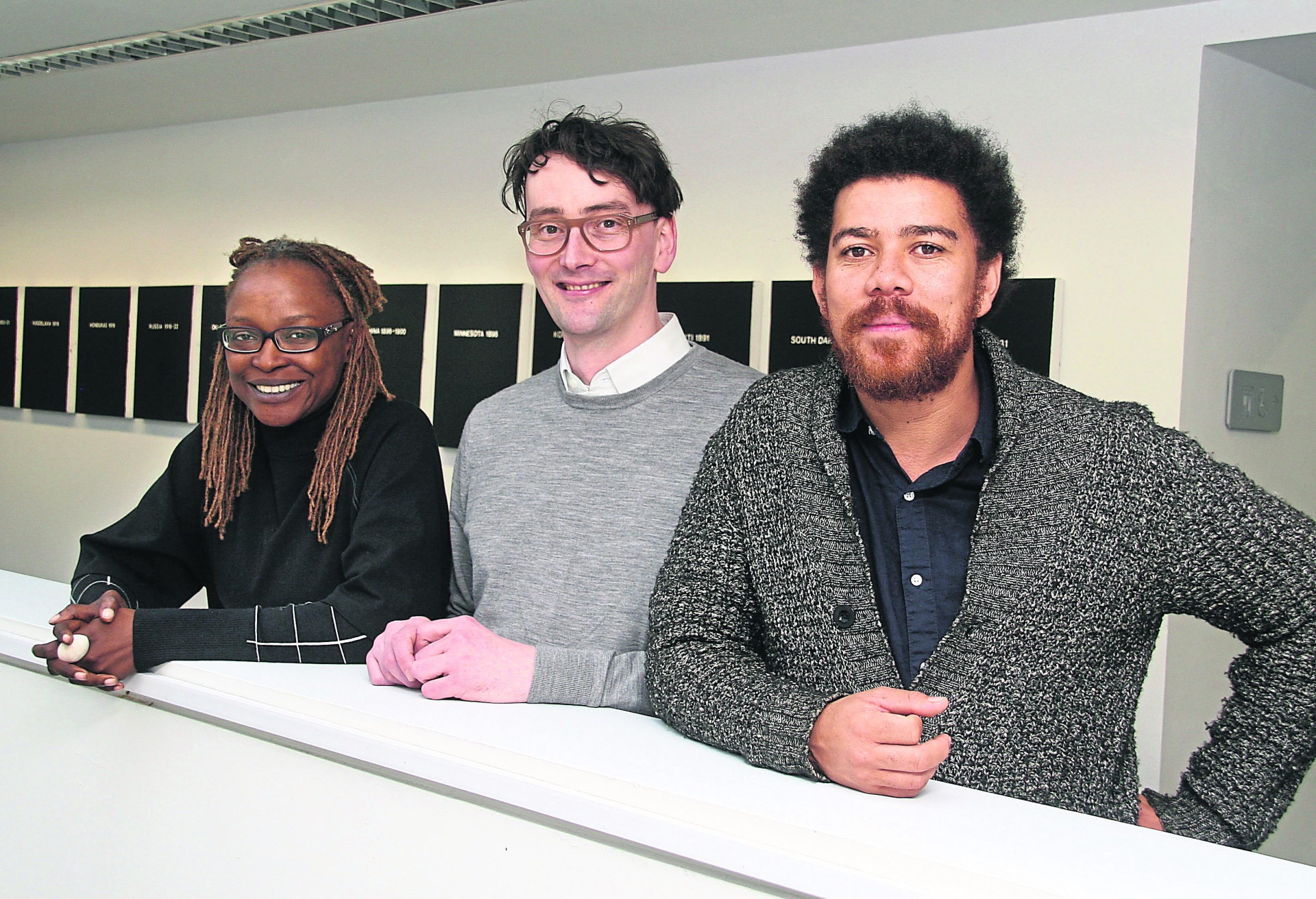 This year, the exhibition, featuring some 57 artists with 50 projects, will expand to include seven venues, from four in 2014.

This year’s exhibition spaces are Limerick City of Gallery of Art, Cleeve’s factory, the Hunt Museum, the Sailors’ Home on O'Curry Street, King John’s Castle, the Milk Market and Mother Macs, formerly the Round House pub.

Mother Macs (formerly the Round House) will be the venue for Liam Gillick’s project And Then ..., which will be an open mic spoken word film festival.

Some of the exhibiting artists have strong links to Limerick, while a number of international artists flew into Limerick some months ago to work on projects with a specifically local theme.

Nice Screams, by Deirdre Power and the Softday duo of Sean Taylor and Mikael Fernstrom, invited submissions from the public to write a new anthem that ties in with the centenary of the 1916 Rising, “activating a call to action on the streets of Limerick on April 24”.

A Dhuine Uaisle Uachtair Reoite (Better World in Mind) by Donnacha Toomey was selected by public vote and converted to an ice cream van chime to be performed at Eva International on Sunday, April 24.

This year’s exhibition focuses on new media such as video games, to traditional art works such as tapestries and oil paintings. Curated by Koyo Kouoh, from Cameroon, and entitled Still (the) Barbarians, the exhibition opens on Saturday, April 16.

It will be launched this Friday at 4pm in the City Gallery, at 6pm in Cleeves, and then there will be a launch party at Milk Market from 8pm until late. There will also be a curatorial talk with Ms Kouoh at the Belltable Arts Centre, at 11am this Friday.