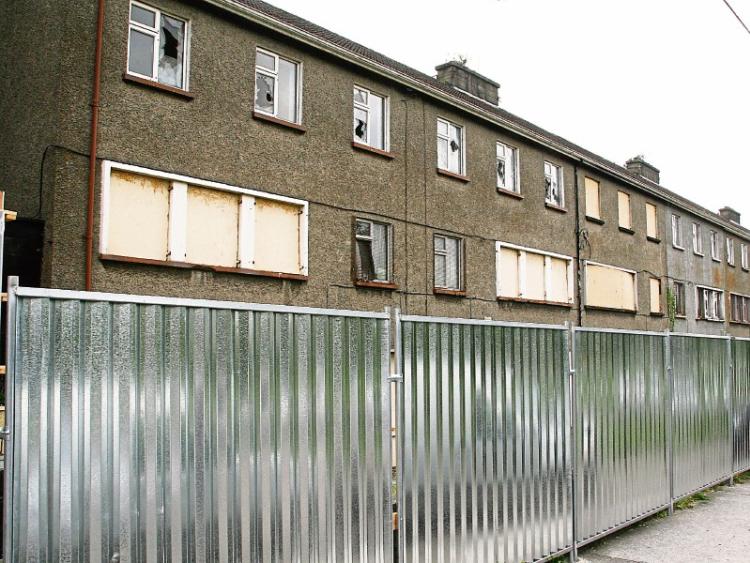 The Hyde Road flats are ready for refurbishment by voluntary housing body Cluid. The works are expected to start soon

WORK to redevelop the Hyde Road flats in Limerick city is expected to finally commence later this year.

The derelict flats have been taken over by the voluntary housing provider Cluid, and are to be brought back to a liveable condition.

There has been frustration with the delays on work to the site, with housing director Pat Dowling saying this was down to “an extraneous issue”, relating to the title deeds of one unit.

“But this project will now proceed at haste,” he told a meeting of the council’s  housing committee .

City West Labour councillor Joe Leddin says he is “hugely frustrated and disappointed” with the delays to the redevelopment.

“It pains me to drive past them every day and see them boarded up and lines flying out of the window. I am frustrated at the time it has taken to get this due diligence and due process completed. It just seems never -ending,” he said.

With over 4,000 people on the council’s housing waiting list, Cllr Leddin says more should be done to speed up public housing projects, with figures released to members showing the local authority is to build 753 units between now and 2017.

“I know you cannot say this, but I will — your staff must be extremely frustrated by the bureaucracy surrounding [the building of social housing]. There is a three-year time lag. It’s just baffling,” Cllr Leddin said.

Later in the meeting, project manager Seamus Hanrahan admitted this was accurate.

Mr Dowling said: “There is a clear procedure which needs to be followed. Perhaps future governments might want to speed it up, and of course we would welcome this.”

Cllr Jerome Scanlan, Fine Gael, described the flats as an “embarrassment”, and pushed Mr Hanrahan to confirm whether “cranes would be in the sky” by the first week of November.

“That would be my hope,” the official said.

Meanwhile, Limerick City and County Council is seeking to acquire vacant council homes which have fallen into disrepair.

Mr Hanrahan said the council will pay the legal transfer costs should a homeowner wish to dispose of a property.

“We will look to acquire property across the board in the city and county, and make whatever arrangements locally on a case by case basis. The local authority will work proactively to try and acquire and redevelop property which is in a vacant state in both the city and county. Vacancy is an issue nationally, and is one side of the coin with homelessness on the other. There needs to be some joined up thinking to deal with both issues to reduce this,” he said.

The move has been welcomed by Cllr Leddin, who said: “We have brought 100 void houses back into a habitable state over the last year. Suffice to say, there are still a lot of void houses around.”