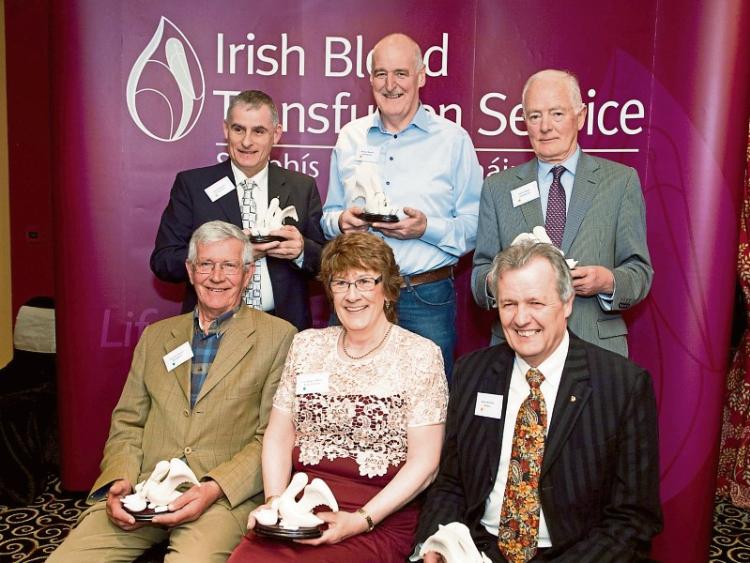 MORE than 70 blood donors from across Limerick were honoured at the weekend for achieving the milestone of donating either 50 or 100 pints of blood.

The donors – many of whom have been donating blood for more than 30 years – attended the event at the Greenhills Hotel, which was organised by the Irish Blood Transfusion Service (IBTS).

Donors from Clare, Tipperary and North Kerry were also honoured on the night.

“People have been donating for years and it’s really a lifetime achievement for a lot of donors. If you are only donating two or three times a year, it takes a long time to get to 50,” said Aileen Browne, regional manager of the IBTS, who herself recently donated her 50th pint of blood.

It is estimated that just 3% of the population donate blood regularly, with IBTS research showing that three lives are saved by each unit that is donated.

Jim Hickey, who has donated more than 140 pints over the past 55 years, now helps organise the quarterly mobile blood donation clinics in Caherconlish.

“My mother had cancer and she had a number of serious operations and she was a recipient so that’s what triggered it off. I was 18 (when I started) and I have been going ever since,” said Jim who previously received a Limerick Person of the Month Award.

Of those who received awards at the weekend, 10 have donated more than 100 pints.

Joan Magner-Walsh, from Knockaderry, is the second person in her family to reach the golden milestone.

“It is a thrill, I’m proud of the fact that I have given 100 pints,” said Joan, whose older sister, Mary, also donated 100 pints before developing diabetes which prevented her from donating any more.

“Our father said to give if we could and that was it, I was delighted to give it and I encouraged the children to donate it as well,” said Mary who added she has “got back pints since” due to her illness.

Kieron Brislane, who is originally from Caherdavin, has also reached the milestone of donating 100 pints.

“I kept it going because I was doing something that I felt was worthwhile and it cost me nothing and the payback is somebody’s life somewhere and that’s the way I always looked at it and I’m always up to encourage people to to the same because it’s painless and it costs you nothing,” he said.

Farmer Seamus Aherne and his wife, Una, who have each donated more than 50 pints said the local blood donation clinics are a night out for the couple, who celebrated their 40th annivserary last year,.

“The first reason I ever got involved before I met Seamus was because my mother had been given blood.

“ I gave back all that she had been given and then my father-in-law had some blood given to him as well and I said I would just continue, “ said Una, who lives in Cappamore.

Seamus says giving blood is “no big ordeal” and is something that everyone should do. “They are constantly looking for blood and we don’t miss it and it’s good to give it,” he said.